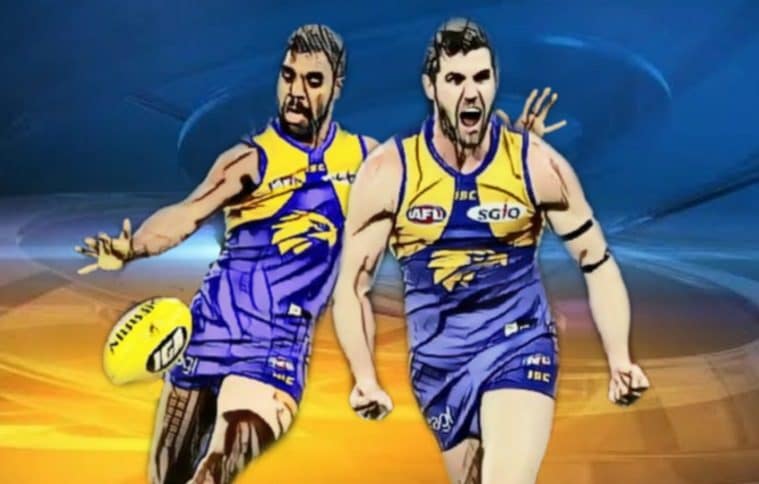 Adelaide and West Coast completed their Queensland hub assignments with an afternoon match at the Gabba, and both will be ecstatic to return home for the next round after a gruelling 6-week campaign that didn’t bring the success either probably expected.

Here are five talking points from a match which would’ve probably received little media interest if not for an itchy twitter finger.

This match received greater coverage than otherwise expected, or probably deserved based on the unusual decision of Adelaide ruckman Reilly O’Brien to write his personal game plan in the Twitter app rather than in notes like everyone else on the planet. Regardless, it made for an intriguing sub-plot in what was already likely to be a match-defining contest between two of the better ruckman in the league.

As expected Naitanui came out hard, giving away two free kicks with an over-exuberant attack on the player, confirming what he thought of the appraisal he is lazy when the ball hits the ground. His impact has never been in racking up big numbers, but more in providing silver service and protection for his obliging on-ball brigade, which was again the case today. He finished with 24 hit outs (seven to direct advantage), seven disposals, three tackles, four free kicks against, but a terrific snapped goal on the left foot that broke an early deadlock.

His opponent Reilly O’Brien took to up to him in the ruck contests, but was more often than not out-jumped with the superior athletic prowess of the veteran coming to the fore. Not to be outdone, he worked his way into the game to be one of the Crows best performers, and dominated the last quarter with several towering pack marks in the defensive 50m area. He finished with 12 hit outs, 19 possessions, nine marks and a game-high seven tackles probably just being shaded in a points decision due to Naitanui’s influence earlier in the game.

The experienced quartet of Sloane, Laird, Lynch and Mackay all returned between 16 and 18 disposals today, however to a man their influence was negligible. Lynch began brightly, linking by hand several promising forward attacks, while no one can ever doubt the commitment of skipper Sloane. However, he has lost some of that intangible presence that made him one of the leagues best mids only a few years ago. The Crouch brothers were typically prolific, with Matt particularly a good contributor on the day, but their direct opponents were match winners and their team needs more from them. Rory Laird is a real issue for the coaching panel, a pencilled in All-Australian for years, he is a shadow of his former self, not providing any of the run and drive we’d all become accustomed to.

The only senior player exempt from criticism today was Brodie Smith who was the leading possession winner on the ground with 31 and also led all-comers with 662 metres gained, providing the best moment for this team’s fans as he won possession in the defensive end and gathered three touches as he cut a swathe through the middle of the ground before finishing brilliantly with a long goal. With the vast turnover of players in the short time since they entered a Grand Final as favourites, they cannot afford such limited output from the remaining senior players.

The knee injury which former skipper Walker finally succumbed to and missed today’s match allowed the new coaching panel to look at a fresh line up, one that’s more likely to be in place when Adelaide finally turn around their fortunes. Highly touted draft pick Fischer McAsey was pushed forward and despite the unenviable task of lining up against the stingy Eagles defence was beaten but not demoralised, even completing two impressive contested marks.

The other young key forward, Billy Frampton was less prolific, but still managed four marks and a goal. I’m not suggesting we write Tex’s eulogy just yet, but in the interests of a quick return to contention, Adelaide would be better served investing time into these youngsters and Fogarty when he returns from a shoulder injury. While neither player in the key roles today will keep Walker out in the short term, the lack of precise delivery and the quality of the opposition can easily explain this.

While you would never contemplate not adding a player of Kelly’s enormous talent, there would have been some consternation amongst the Eagles brains trust about how the incumbents would accept a player marginalising their role. The surprisingly slow start to the year by both player and team wouldn’t have raised alarm bells, but might’ve just tightened the collars of a few powerbrokers, however the past fortnight seems to have addressed any fears.

Obviously the loss of captain Luke Shuey last week eased the pressure of fitting everyone in to a functional midfield, but the way the Eagles mids worked with sublime cohesion today would sound a very significant warning to the rest of the competition.

Kelly began like an Olympic sprinter, returning ten disposals, four clearances and three tackles, including two rewarded for holding the ball in the first quarter. He was surprisingly moved out to the wing in the second term and struggled to get involved, not registering a clearance or tackle for the term. The second half he returned to his customary role inside the square and took over again, registering another double figures of touches, and a further four clearances to be one of the more dominant players on the ground. A confident Kelly should compliment the Shuey’s polish upon his return as both benefit from the heavy lifting of their bulls Yeo and Redden.

Football can be a lonely place when you are losing and I’m certain Matthew Nicks never expected to be this friendless when he took the plumb job at the West Lakes. While he’d be enthused about the level of application of his charges in this one, the overuse of handball, particularly early was easily countered by West Coast’s manic pressure, forcing turn over after turn over. Secondly, when they did control the ball, they took far too long to move the ball forward, allowing the hard working Eagles defence to swarm back in numbers thwarting any attempt the Crows made to penetrate the goals.

The last half might provide some insight into the future, as the Crows tried to move the ball quickly from half back by foot rather than hand with better results. Nicks would also be pleased with the continued return to form of Tom Doedee who has seven intercept possessions along with 11 marks in an encouraging outing.

Meanwhile, Adam Simpson would’ve been thrilled with the way his team switched play across the ground and attacked with pace into the forward fifty. Josh Kennedy the main beneficiary with four marks on the lead from precision passes further afield with no Crows defender able to shut down the space. As mentioned before the Eagles outworked their opponents, crowding them when they had possession, outnumbering them on the few occasions they went forward and then breaking quickly on the counter attack.

In particular he’d have been pleased with the way the defence stifled any Adelaide forays, Tom Cole and Liam Duggan particularly impressive working off the marking exploits of Jeremy McGovern, Brad Sheppard and Tom Barrass, these five combined for 25 intercept possessions going a long way to the final inside 50 count of 49-24 in favour of the winners.

And with respect to the Adelaide Crows handball heavy game plan, particularly in the first half, here are five quick hands to finish off.

The X-Factor Ladder After Round Five

Full disclosure – I’m an unabashed Jack fan, but like many others are impatiently waiting for him to reach the heights he seems capable of on a more consistent basis. To date in 2020 his output has been underwhelming, averaging just eight disposals, 2.7 marks and 1.2 goals, albeit in drastically reduced game time. However today’s match seemed to provide a turning point for the powerful key forward.

From early in the game he got on his bike and gained possession deep in the defensive half, and while he was outbodied at times by Kyle Hartigan who played well one on one, he continued working hard. Reward came in the third term when he regained some of the old swagger and finished with an equal season high two goals. His second goal requires particular mention for the incredible team oriented effort of Liam Ryan to chase down a ball destined for a behind, knocking it back into Darling’s path before he snapped truly.

Borrowing the term from the Oakland Athletic’s dynamic World Series champion duo, Jose Canseco and Mark McGwire and applying it to West Coast mids Elliot Yeo and Jack Redden, but instead of beating down opponents with home runs, these former Lions do it with brute strength.

Yeo is a multiple best and fairest and All-Australian and is in superb form, competing for best afield honours in the last two weeks. His 21 disposals gained a team leading 478m with eight inside 50s resulting in an equal game high seven score involvements. But it is when he can get down and dirty that he really rises to the fore, five bone crunching tackles including a game high three inside forward 50 set the tone for his team to control the match.

Likewise the less heralded but super effective Redden with 18 possessions at just a tick under 90%, and three vicious tackles of his own, including the best of the match when he collared a streaming crow to claim a holding the ball adjudication, combine to create time and space for the likes of Gaff, Sheed and Kelly to slice opponents up.

The postscript to the Naitanui/O’Reilly clash captured in the on ground interview after the match had a feel good element to leave even the harshest cynics with a smile across their face. Telstra identified a marketing opportunity and provided a brand new Samsung Galaxy phone for Nic Nat to hand over after the game to the Adelaide number 43 who had earlier claimed his infamous tweet was a result of a faulty handset.

At times in their enforced stay in sunny South-East Queensland, premiership fancy West Coast have looked like they’d rather be anywhere but there, however today some of their renowned harmony looked to return. This was best highlighted when young winger, Brayden Ainsworth kicked his first career goal and was swamped by teammates from near and far. The Tigers have shown the blueprint of a happy list can achieve great things over the last three years, a return to familiar surrounds with two wins on the trot could built momentum for the Eagles.

Adelaide would be excused for a defeatist attitude, currently mired to the foot of the table with six losses and staring down the barrel of their worst ever finish, but the general energy levels against an outmatched opponent today were admirable.

Personally I think both major broadcasters have done an admirable job introducing simulated crowd noise after the eerie silence made round 1 all the way back in March so hard to watch. However, now that we are returning to fans attending in reasonable number at some venues it’s time to reel in the canned audience and let the organic sounds of the game take over. There’s nothing as thrilling as the synchronised ‘ball’ call after a big tackle, or the theatrical booing anytime an outcome returned from the ARC is returned on the big screen. So kudos to the networks for acting swiftly to address a gap, but it’s now time to give this important role back to the fans.

Guys, if you like this, I’ve got heaps more I produce every week for members. Please consider joining to check out our Player Power Rankings weekly, Wingman Rankings and our Defensive Player of the Year award. Well worth the 40-80c per day, I reckon… but I am biased.