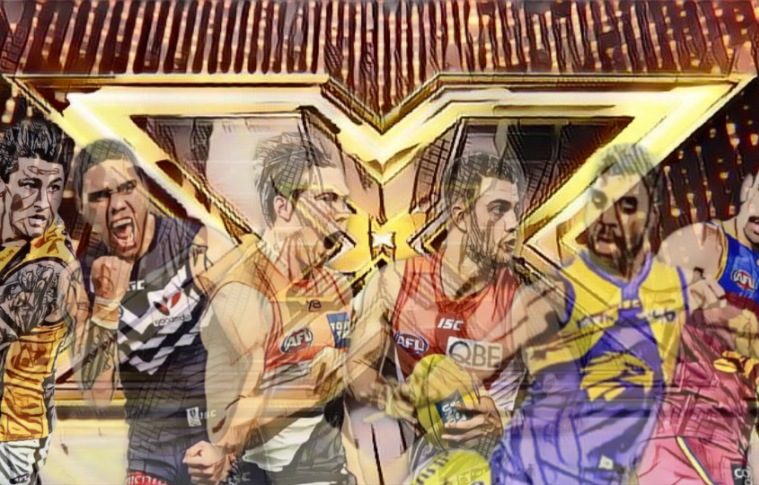 The X-Factor Ladder After Round Five

We’ve already got three weekly columns for members around players rankings and I really didn’t want to add a fourth, as I don’t want to be bogged down in numbers, but as something I can throw together every three or four weeks, I’ve toyed with the idea of rating the players with the much talked about but rather undefined quality known as the “x-factor”.

It’s something that’s intrigued me for a while – what is the x-factor? How do you get it? Can you spread it to others by being within 1.5 metres?

All good questions, so I started to explore the stats for this season and I used the players most often cited when the phrase “x-factor” is employed. Usually, they’re the small to medium forwards and almost all of the time they are the kind of players that hit the scoreboard.

With that in mind, I started to compile a list of criteria that could be used to assess the best x-factor players in the game currently.

The first thing I wanted to ensure was reflected was the ability to kick goals. As such, a player has to average at least a goal per game to qualify for this list. I want you to remember that – THEY HAVE TO HAVE AN AVERAGE OF A GOAL PER GAME TO MAKE THE LIST!

Thirdly, I opted to leave traditional key forwards out of the equation. Ben Brown, Tom Hawkins, Jeremy Cameron and the like… they don’t get a look in here. What we ended up with is group of small to mid-sized forwards and a couple of midfielders who excel at hitting the 50 metre arc and kicking a goal or two.

A bit of a surprise, Taylor has five goals for the season and 21 score involvements. His seven marks inside 50 propel him into the top 20. He has a ripping pair of hands.

The old fella still has a bit left. His five goal assists are the highest of any player appearing on this list.

I couldn’t believe he got dropped to make way for Daniel Rioli. 22 score involvements and five tackles inside 50 see him slot in nicely here. Could have been a bit higher if not for a week off.

Down a little on what we’ve come to expect, Breust’s eight tackles inside 50 are behind only Dan Butler and Jacob Townsend on this list.

He’s a strange fella, this Finlayson. Sometimes it looks like he has the world at his feet. Other times, he looks like he’s gonna trip over it and land on his face. 20 score involvements and eight marks inside 50 indicate he has been on more than he’s been off this season.

Speaking of being on, did anyone see Perryman’s season coming? Nine goals and 22 score involvements despite spending the bulk of his time on the wing and half back… he is having a ripping season.

Toby can do all things. Eight goals, 21 score involvements, eight marks inside 50 and a match winning effort against the Pies have highlighted just what a brilliant player he is.

Ultimate x-factor player. Disappears for ages, then bobs up and makes a huge difference. 25 score involvements and six marks inside 50 complement his five goals for the season.

The Hoff does a bit of everything. At 33 years old, he is as elusive as ever, notching seven goals, 23 score involvements and seven marks inside 50.

So underrated but does everything well. 27 score involvements, six tackles inside 50 and five goals of his own make him a valuable third or even fourth forward for the Power.

Great numbers across the board. Seven goals, seven marks inside 50 and six tackles inside 50 mean that Heeney has little to no weaknesses.

If only he’d stop ducking… He has 30 score involvements and eight goals to his name this season. When he touches the footy, good things happen.

Gunston has beautiful hands, and often marks balls he should be nowhere near. He has nine marks inside 50 to go with seven goals and seven tackles inside 50 as well. Plus, he has spent time in the back half as well.

The first of our players in double figure goals on the list. Charlie has ten goals to his name and eight marks inside 50. Surprisingly, he has no goal assists and the third lowest score involvements of the top ten, with 25 (Heeney has 24 and Gunston has 23).

Has rediscovered his form this season, with nine goals, 30 score involvements and six marks inside 50. Would be a chance at leading the Hawks B&F at the moment.

Now this was surprising. The most consistent player in the game has six goals for the season and a mammoth 38 score involvements to lead all on this list. If he kicked straight against the Crows, he may well be pushing for the top.

Proving his worth to the Blues, Martin has taken ten marks inside 50 to date, putting him behind just one player on this list. With six goals and 30 score involvements, he has added an element of danger to the Carlton front half.

Does it all – eight goals, 29 score involvements, seven marks inside 50 and six tackles inside 50. In a team that has struggled at times, Ryan has been one player who has definitely shown up.

The recruit of the season to this point. Butler has a huge 13 tackles inside 50 currently, bringing that Richmond style to Moorabbin. His nine goals and 30 score involvements indicate he is a huge threat inside 50. He is also second in goal assists on this list with four for the season.

Now you know why Carlton wanted him so badly. Sadly for them, I think his price has gone up considerably. With 11 goals he is co-leader in the Coleman race, but also boasts key forward numbers in marks inside 50, with 13. He has 33 score involvements and eight tackles inside 50.

If they announced the AA team right now, he is your small forward, easily.

So, where are Jordan de Goey, Connor Rozee and Gary Ablett? Sorry fellas, you’ve gotta lift that goal average to above one per game. All these blokes sit at 0.5 to 0.8 per game. One good week can turn that all around, but until they become a goal per game players in 2020, they’re under the cut off.

So are Dusty, Danger and Pendles. A goal per game is harder than it seems.

Jake Stringer has ten goals for the year, but just 14 score involvements in total. What does that tell you? If he’s not kicking the goals himself, he is not creating for teammates either.

Other players of interest

Anthony McDonald-Tipungwuti is currently in 37th, but he does have a game in hand, so when that extra fixture is added to the mix, I expect him to jump significantly.

So, I plan to update this every few weeks or so. It’s extra work, but I like the concept and I love being able to have a formula to assess which players are excelling in certain roles.

Like these lists? You’d love what we’re doing for Wingmen and defenders on a weekly basis for our members. Please consider joining and supporting us as we strive to provide something different in the footy media landscape.