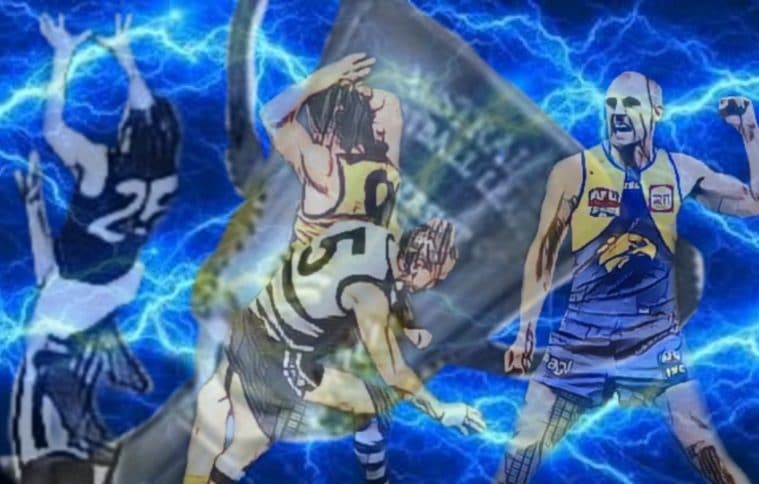 The Great Grand Final Changing of the Guard

I never thought I’d see the day, yet here we are.

To me, there has always been one game that stands head and shoulders above all others as the greatest game ever played. It was the last game of the VFL era, and a contest that, amazingly, still holds up by today’s standards. With levels of physicality unequalled since, and both incredible acts of courage and skill on display, the 1989 decider was like football utopia.

However, nothing lasts forever, and just like that, the footy guard seems to have changed.

In a poll to determine the greatest grand finals of all time, to be aired on their channel at some point no one really cares about, Fox Footy revealed that the game I loved more than any other had been relegated to the number two slot, behind the 2018 decider between the Pies and the Eagles. 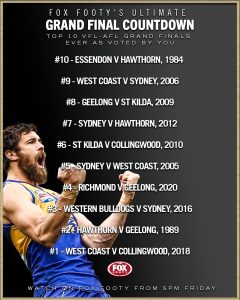 Now, I have heard some rail against this in a move akin to Abe Simpson yelling at a cloud, but it was determined by a popular vote; there is nothing you’re going to do to change it. No, what this reflects is a definite shift away from the old guard to the new guard of footy fan. It demonstrates a recency bias, no doubt, but one that was inevitable. It is, as they say, the way of things.

Young people get old and younger people move into the frame. They’re the ones voting in this poll, now.

Growing up as an impressionable teen in the late 1980s, I had never witnessed a game like the 1989 Grand Final. The ferocity of the players, the resultant carnage with players putting their bodies on the line and paying the price when they did, and the undoubted star power of the combatants grabbed me by the eyeballs and glued me to the TV set. What you have to remember here is that this was a period where games were not shown in their entirety every week. There was none of this saturation coverage we see now – you got Friday nights (sometimes), maybe one Saturday game and a Sunday game – that’s about it. Things would change drastically in the next few years, but the eighties were a wasteland in terms of TV footy content.

Watching this game made me hunger more for footy. It was the gladiatorial style of the game, the courage to continue of Dermott Brereton and Robert DiPierdomenico, the incredible attack on the footy and the man of Gary Ablett and his stunning nine-goal haul that almost dragged the Cats over the line.

It meant everything to me as a young footy fan, and in looking at the list presented by Fox Footy, I was actually taken aback to see it sitting behind West Coast’s triumph over the Pies.

However, as much as I loved the 1989 clash, there are others who swear black and blue that the 1970 decider, pitting Carlton against Collingwood in front of over 120,000 people was the best.

My father loved the 1971 Grand Final, pitting Hawthorn against St Kilda, stating that game was just as good, or better.

Leading by 20 points at three quarter time, the Saints appeared to be on the cusp of a second flag, but a seven goal to three last quarter lifted the Hawks to a thrilling seven point win. Add to this the heavy collision between Kevin ‘Cowboy’ Neale and Peter Hudson early in the game, as the Hawthorn spearhead attempted to break the record for the most goals ever recorded in a VFL season, and you have a game with a heightened sense of drama.

My Dad made me sit down and watch it with him, courtesy of a borrowed VCR tape back in the early 90s. Maybe he was sick of me putting in the tape of the 89 Grand Final and raving about that? Maybe he just wanted to share a game that meant a lot to him? My guess is this would be like me sitting an 18-year-old down and making them watch the Grand Final of 1989 now. Sure, it is a spectacle, but without the emotional investment and removed from the time it occurred, it lacks the little bit of oomph that the 18-year-old may remember from 2018. They may see it as a bunch of older blokes running around in a time they do not relate to.

Not so surprisingly, those games did not make the top ten in Fox Footy’s list. I mean, who was going to vote for them? They were games telecast in black and white before I was born (and I am no spring chicken!) and the style of play was vastly different to the way the game now looks. Sure there are moments of “Jesaulenko, you beauty” that are iconic, as Dermott getting flattened in 1989 is now viewed, but to a modern fan… what do they really mean?

I suppose I should have really seen this changing of the footy guard coming. Within our own team here at The Mongrel Punt, the subject of great Grand Final moments has come up more than once. Despite me bleating about the heroics of 1989, even those who love footy, like our wonderful writers, simply cannot grasp the essence of that game. It’s fair enough, too – they were not there for it. Some were not even alive – how can they be expected to love it and embrace it as I do?

Instead, their great moments revolve around Tom Boyd kicking a goal to send the Dogs fans into raptures in 2016, Tom Hawkins tearing the Pies a new one in 2011, Michael Voss bouncing up after a Scott Burns hit in 2002, and yes, Dom Sheed with the kind if ice in his veins that makes Bailey Smith resemble a junkie at Footscray Station in the 90s until he does it in the biggest game of the year. I cannot begrudge their love for those moments, or the games that have taken place over the last ten or fifteen years. Those games are to young men now as 1989 was to me. Only now, they are the ones doing the voting in polls like the ones Fox Footy is running.

So, does something like this result indicate that the 2018 Grand Final was the superior game? No… of course not. More memorable to a new generation, yes, but a better game? I’m not sure.

Of course, over the years, we will revisit the games played on the grandest stage in footy, and over that time the gloss on the 2018 decider will fade into memory as well. Just as 197o and 71 did. Just as 1989 seems to be doing now.

When that happens, try not to feel slighted by those now looking elsewhere for that which sent chills up their spine. They’re you… only younger.