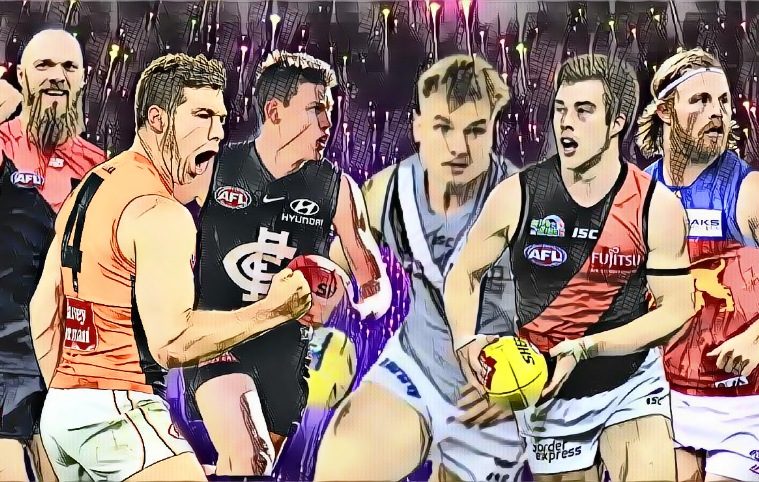 Let’s take you behind the scenes of Mongrel HQ.

This year, I decided to take on a different assignment. We’d done a rolling All-Australian team in four instalments, but in 2021, the challenge was to keep the rolling team going every single week. It’s a challenge that I will admit, is much harder than I anticipated.

These players could make my life so much easier if only 22 players across the board were playing good football. Instead, so many of the AFL’s best players are putting together seasons of excellence, and there are too many that would consider themselves unlucky to be overlooked. Enough talk, and enough of the excuses – let’s get down to the business of the Round Five All Australian line-up.

Here is the Round Four team for those unaware:

After losing his place to Steven May in Round 2, Power defender Aliir Aliir reclaims the centre half back position after another wonderful performance against the Blues, combined with May’s untimely injury. Since crossing to Alberton, Aliir has thrived, and is perhaps the final piece of the Port puzzle. Across the first five rounds, Aliir is rated above average in all bar one of the five important defensive categories (disposals, intercept possessions, intercept marks, metres gained and 1-on-1’s, and his disposal efficiency of 87% is elite.

Riewoldt returns to the line-up after performing excellently in the last two weeks. Sitting second in the race for the Coleman Medal, Riewoldt tore St Kilda’s defence apart, kicking five goals from eight scoring shots, taking his tally to 17 for the season. With Tom Lynch taking the second key defender, Riewoldt has enjoyed the space and freedom of only needing to deal with a singular opponent, and has thrived in the process.

Harry McKay moves from centre half forward to the forward pocket, displacing Josh Bruce. So why did McKay keep his place ahead of Bruce? Bruce has kicked more goals, I hear you say.

Well, it’s quite simple. McKay and Bruce play for completely different teams. Bruce has the best midfield in the competition feeding him ample opportunities, while McKay gets double teamed and has to fight for every scoring shot, given the Blues don’t push the ball forward as well as the Dogs. Seven of McKay’s 16 goals came against Fremantle, but it is this pundit’s opinion that McKay has performed more consistently than Bruce, and thus the choice was made to cut Bruce and retain McKay.

As indicated last week, Steven May’s eye injury has cost him his place in the team. Through no fault of his own, May was overtaken because he didn’t take the field on Sunday, and will likely miss a further 2-3 weeks. It is as simple as that, and if May can return to the form he showed before his injury, he will regain his place in no time.

I also said last week that Josh Bruce needed to find consistency. Last season, Bruce destroyed the Kangaroos with six goals, but only kicked eight goals against the other 16 opponents. This year is seemingly no different. Bruce has kicked 17 goals in 2021, but 10 of those came against the battling Roos, and seven have come against the other four teams. Yes, wet weather didn’t help the key forward, but Bruce has had enough time to make his mark against teams not named North Melbourne, and so far he hasn’t proven his worth.

So with just the two players falling, here is how the mostly unchanged team looks like after 5 rounds:

This section used to be called “Who’s banging down the door’, but from this point forward, more leniency will be shown to our incumbents. Therefore, the players we highlight here will need to show sustained brilliance, and hope that their rivals in the team string together performances of mediocrity, or sustain an injury, for an overtaking manoeuvre can be executed.

Ask yourself this question. Would Fremantle have won three of their first five games this season if David Mundy had retired? The answer is simple.

With this in mind, I can understand why people would be surprised that Mundy isn’t featured in our team. While Mundy has been instrumental in Fremantle’s victories, he has also been tagged out of games, resulting in Fremantle losses. Mundy is undoubtedly in his final year at the Dockers, but it is clear that on his way out, he is providing his team with vital experience to guide his young teammates, teaching them everything he knows about the midfield craft before he retires. As shown this season, the Dockers did the right thing in keeping him around.

Brodie Grundy and Nic Natanui engaged in an old-fashioned ruck duel on Friday night, and shared the points after a wonderful battle. When the Pies took control of the game in the first quarter, Grundy was the catalyst, kicking two vital goals. In the middle two terms, however, Natanui fought back, pulling the Eagles back into the game. Only one of Natanui’s 14 disposals came by foot, and Grundy did gather more of the ball throughout the night, but Natanui was the clearance king with seven, compared with Grundy’s two. The slightest of edges went to Nic Nat, simply because his team won, but it was an epic battle between two of the AFL’s premier ruckmen.

Lance Franklin. What more can be said about this gift the football gods have given us. Buddy is quickly closing in on the magical 1,000 goals, a feat that surely no one will ever achieve again. Seemingly out of nowhere, Buddy has resurrected a career that threatened to come to a halt following years of injuries. This year, he has been carefully managed, and has kicked 11 goals from his three appearances. It does seem like we can’t have nice things, as the road to 1,000 has hit a bump, with Franklin now sidelined for up to four weeks with bone bruising in his leg.

It is such a gift that we have so many key defenders playing terrific football. With Darcy Moore narrowly keeping his place despite Nathan Buckley playing him in the forward line for some odd reason, the choice to fill the centre half back position came down to three players; Eagle Tom Barrass, Lion Harris Andrews, and Blue Jacob Weitering. Barrass was again wonderful against the Magpies, playing opposed to Moore, and he kept Moore from touching the ball for two and half quarters. Andrews, after a slightly slow start to the season, has settled back in nicely, and the Lions look a much better team when Andrews is controlling the defensive end. Weitering, in partnership with Liam Jones, has held Carlton’s defence with all hell breaking loose ahead of him time and time again.

The final decision came down to Aliir vs. Weitering. Arguments were made that Weitering has had to do more for his team, given the Blues have had their issues in stopping opposing midfielders from moving the ball forward. Aliir, however, got the nod by the slightest of margins, for two main reasons. Firstly, Aliir has Weitering’s measure in the main statistics, averaging more possessions (both contested and uncontested), intercept possessions, marks, and has fewer turnovers. Aliir also kept McKay to a solitary goal and just five disposals. Secondly, Weitering suffers because his team has produced some terrible performances, while the Power are one of the teams to beat.

Finally, if this team followed the AFL’s rules, and introduced a 23rd man “medical sub”, that honour would go to Demon Kysaiah Pickett. 19 years old, and in his second season, Pickett is the excitement machine Melbourne fans have craved for years. Pickett is a natural goal-kicker, nailing 10 goals from his five 2021 matches, and has doubled his disposal output, as well as increasing his tackle, mark and inside 50 count from his debut season.

This is another section that will be changing from this point forward. We can’t keep chopping and changing the team because of one bad performance, or an injury that is only minor. The following players fall into this category. One poor performance, an injury, and playing out of position will not see these players fall out of the team. Keep in mind however, that if it continues, there will be no hesitation in replacing the dead weight down the track.

Changkuoth Jiath is a star in the making. But perhaps other teams have started to work him out and have put time into stopping his threats. Against Melbourne, Jiath was average at best, and he couldn’t find the space and time to use his agility and run. Only gathering 13 disposals, Jiath also registered three clangers, giving away three free kicks in the process. Jiath has only played 12 career games, and on his first four rounds, will be a superstar in defence for the Hawks, so one subpar performance doesn’t hurt his standing in our team just yet.

Like Jiath, Jordan Ridley has had a scintillating state to 2021. That was until Saturday night, when he was knocked out in the first quarter against Brisbane. Under concussion rules, Ridley will automatically miss the ANZAC Day clash, which is a hammer blow for the Bombers, but not for this team, as Ridley should return in Round 7, and he shouldn’t miss enough time for his position to be under threat.

Why exactly did Nathan Buckley choose to play his best defender in the forward line? I understand Collingwood have their issues forward of the ball, but taking Darcy Moore out of defence is just robbing Peter to pay Paul. When Jeremy Howe left the field with a hamstring injury, I was sure Bucks would revert to his natural selection and move Moore back, but it never happened. Sure, Moore ended up with three goals to his name, but at the other end, Oscar Allen and Jack Darling combined for 10 goals, and Mark Keane looked overwhelmed in just his second game. Will Buckley make the same mistake twice? If he does, you can bet many dollars that Moore will find himself out of our team quicker than he can blink.

Five rounds down, 18 to go. So how many teams have already cemented their place in the top eight? Are the Swans looking shaky? Can the Crows keep their season alive? When will North Melbourne win their first game? Has Victoria killed the Lions? How long will Bucks survive? Can the Saints fix their woes? Who will stop the Tigers? Will the Dogs or Demons blink first? Can West Coast win away from home? Are the Bombers really a bottom four team? Have the Giants turned the corner? Can Clarko save the Hawks? Does Ken have the Power to win? Does Teague have the cattle? Have the Dockers found Mundy’s replacement? Can the Suns win without Witts and Rowell? Are the Cats too old?

All these questions and many more, on the next edition of the Mongrel Punt All Australian team. See you next week.