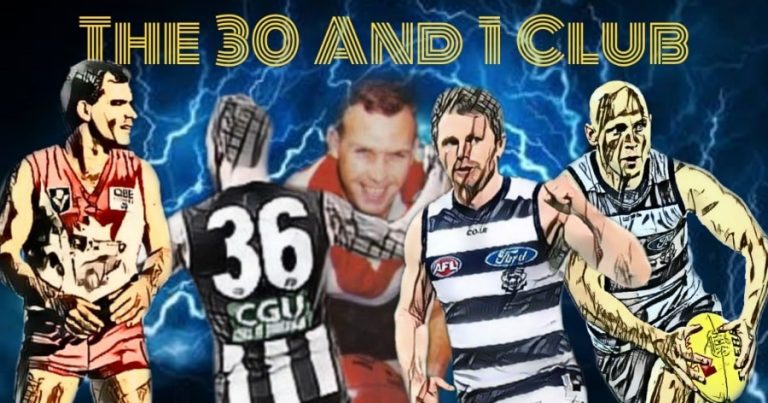 Another week in the off-season, another Mongrel Stat Club to enjoy.

Dusty has never pulled this one off. Nor has Christian Petracca, Marcus Bontempelli, Lachie Neale, or Tom Mitchell.

I don’t know about you guys, but growing up, if a player had 30 touches in a game, it was considered a spectacularly good effort. I used to marvel at the way Diesel Williams would find the footy – just in the right place at the right time seemingly all the damn time. And then he’d run forward and slot a goal or two as well.

However, doing it consistently enough to average 30 touches and a goal… that was something else, entirely.

In a time before the internet, you’d have to scour books and mull over numbers to find players who had achieved this milestone. Back then, there were not too many that did.

This is very much a stat that leans toward the modern player. Averaging 30 these days is not so amazing. Players seem to hover around that mark every week and in 2022, we had five players hit 30 or more touches per game.

Rory Laird, Clayton Oliver, Sam Walsh, Darcy Parish, Jack Macrae, Zach Merrett, and Lachie Neale all averaged that 30 or more disposals per game, but the highest goals-per-game average amongst them was just 0.44.

That was Lachie Neale. He was good, but he wasn’t good enough to get into the 30 & 1 Club.

It’s quite a distance from the feats of the Father of The 30&1 Club – the legendary Bob Skilton.

In the first season that official stats were kept for recording disposals in the game, Skilton did something incredible. Not only did he notch 32 disposals per game, but he also became the only man in history to do that and average two goals per game.

Skilton’s 32.00 and 2.00 goals per game puts him in the loneliest club in the game – he is the only member of the 30&2 club. It is worth noting that for the nine years before he hit that mark, Skilton averaged over a goal per game, as well, and in one season, notched an average of 3.75 goals per game. That would now see him walk away with the Coleman Medal.

Incredible stuff, and given how highly he is regarded, it would not surprise me in the slightest if he had several 30 & 1 seasons under his belt. Alas, we just don’t have the available numbers to back it up.

It would six years until Skilts got some company in the 30 & 1 Club, with Collingwood’s Wayne Richardson putting together a remarkable 1971 season, comprising 32.83 disposals and 1.61 goals across 23 games.

Richardson is often left out of the conversation when people discuss great mids, but the ability to hit the scoreboard is an underrated aspect of being a potent midfielder, and he had nine seasons where he averaged over a goal per game, including his first year in the league, where he averaged a career-high 2.31.

19 seasons would pass before a third member joined the club, with the ball magnet, Greg Williams averaging a career-high 31.73 disposals and 1.55 goals per game in 1990. That must have been a Brownlow year, right?

Diesel was limited to just 11 games (I used ten games as the cut-off for this stat) in that season, but his influence on a struggling Sydney team when he did play was huge.

The very next season, Williams’ Sydney teammate, and father of now Collingwood star Tom, Barry Mitchell joined the club. When you think of accumulators, Mitchell was a freak at Sydney. He had five-straight seasons of 27 disposals or more, and was the Robin to Williams’ Batman (I don’t know what that makes Gerard Healy. Maybe… Alfred? Barbara Gordon?) in that Sydney midfield.

His 1991 season saw him amass 31.32 and 1.36 in an effort that his Brownlow-winning son has not been able to match. Something to aim for perhaps, Tom?

And then the drought set in.

The average of 30 disposals per game suddenly became a little harder to come by, with several years in the 90s seeing no one hit that mark, let alone add a goal per game to their figures. The 2000s came and went with no one putting up numbers good enough to join these four men.

And then, The Little Master hit his straps.

By this stage, you can see how seldom this feat was achieved. Running forward and kicking goals whilst winning the footy all over the ground simply did not occur that often… but if there was one man to kick the door in on the 30 &1 Club, Gary Ablett Junior was the man to do it.

From 2009 until 2014, Gaz had five seasons where he not only joined the club, but took over as the undoubted leader. In 2009, 2010, 2012, 2013, and 2014, Gary Ablett made this stat his calling card. He dominated firstly for the Cats, and then for the Suns as his superior work ethic and incredible goal sense made him the ultimate weapon both in the middle and running forward.

For him to notch five 30  & 1 seasons whilst every other player in the history of the league had managed just four before his first, is absolutely incredible and a testament to how he will be remembered. We took him for granted while he was playing.

However, the 2010s saw others join the party as well.

Another Magpie joined him in 2012 – quite unexpectedly, actually. Dayne Beams notched 30.88 disposals and 1.17 goals per game in a brilliant season of footy.

The last man to join the club was Patrick Dangerfield, in his Brownlow Medal-winning season of 2016. He averaged 31.75 disposals and 1.00 goal per game, sneaking in with the goals by one straight kick.

2022 was the sixth season since Danger made the grade and joined one of the more exclusive clubs in footy. Christian Petracca went perilously close in 2021, averaging 29.20 and 1.16 and would be my pick to be the next man to join the club. He has the ability to hit the scoreboard often but his radar was a little off this season. Perhaps Bont could join him, but it would take career highs from both in terms of disposals to do so.

Could Tom Mitchell join his father on the list at his third club? Could Clayton Oliver add to his already impressive list of accomplishments by increasing his scoring impact? Or will it be someone from left field?

With just eight players and 13 instances of their brilliance populating the 30 & 1 Club, it remains one of the rarest achievements in the league.

And of course, as we mentioned earlier, The 30 & 2 Club is something else all together. How I wish I saw Skilton play…

As always, guys, if I have missed one, let me know. Cheers – HB