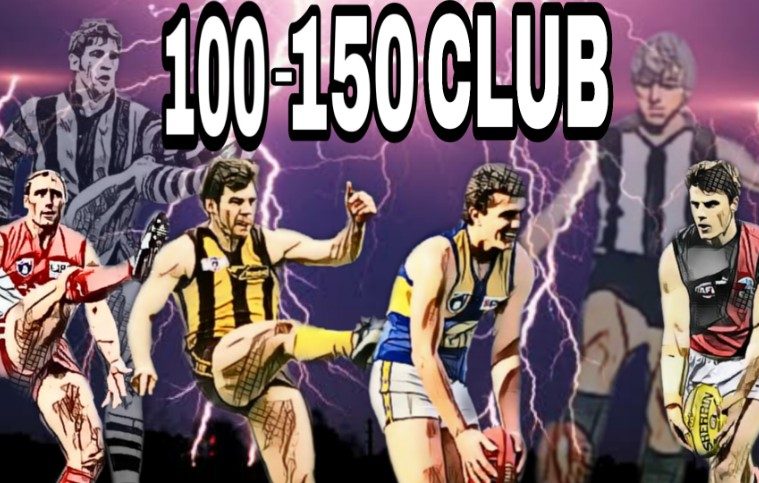 The last man to kick 100 goals in an AFL season was Lance Franklin, twelve long years ago. Prior to him climbing that mountain, only two other players had achieved the feat this century – Fraser Gehrig in 2004, and Matthew Lloyd in 2000 and 2001.

We love some obscure statistics at The Mongrel. More than that, we like making up our own. With that in mind…

100 goals in a season is extraordinary. It’s been done only 56 times in the history of the VFL/AFL, with names like Lockett, Dunstall, Hudson and McKenna making the list multiple times. The strength to these forwards was always their marking ability. On the lead, or one-out in the forward line, they had the uncanny ability to beat their opponent and take a grab. Whether it was Dunstall meeting the ball full chested, or Lockett overpowering his defender, it was that aspect of the game that allowed so many shots on goal.

But who was the best mark-kick man in history?

To assess this, it’s unfair to base it on one statistical high. Here’s why.

A player like Peter Sumich kicked the ton only once, in 1991. His 111 goals came in a year where he collected 171 marks; a truly great season by anyone’s measure. Sumich was unable to climb those heights again. His next best haul was 90 goals in 1990, and that was accompanied by 139 marks. He makes the 100 goals and 150 marks club just once, whereas there are others who have climbed the mountain several times.

To kick 100 goals and combine it with 150 marks in a season is an achievement that will, sadly, rule out many of the old-timers, but gives an indication as to just how good those who achieved it were.

First of all, those who were close, but just missed out.

Gary Ablett Senior was one I thought would have at least one membership in this club following his move into the Geelong forward line. The closest he came to joining the 100-150 club was in 1995 when he booted 122 goals but missed out by just two marks on cracking 150. Doug Wade booted 127 goals in 1969 but his 139 marks left him 11 short, while Alex Jesaulenko kicked the ton in 1970 with 115 goals, and added 141 marks to fall short as well.

Peter McKenna beat out his rival, Peter Hudson to be the first man to ever achieve the 100 goals/150 marks in a season milestone. McKenna had 164 marks to go along with his 143 goals in 1970. Hudson wasn’t far behind, with 146 goals, but fell ten marks short of the target, with 140 for the season. He’d rectify that in 1971, having his best statistical season to kick 150 goals, combined with 180 marks.

Not to be outdone, McKenna went two from two in ’70-71. He compiled another stellar year, registering 134 goals and taking 159 marks.

Hudson was the first of the one hit wonders, never reaching the mark again. Others to do so include Geelong’s Larry Donohue in 1976. Donohue is not spoken about in the same manner of other gun forwards of his era, but his 1976 season must have been something to behold. 150 marks went along with 105 goals for the year as the Cats finished fourth.

Tony Modra’s greatest season in the league was when he was still a baby. In just his second season, Modra sat on enough heads to pull in 163 marks, and kick 129 goals. Modra never reached either of those heights again, his next best in each category being 93 marks and 84 goals in 1997.  Still, it cannot take the gloss off what an amazing season he had in ’93.

The last swinging single on our list is Lance Franklin. You guessed it – it was 2008 that Buddy climbed this ladder. His 113 goals combined with 158 marks secure him a spot in this exclusive club. You have to remember – people have never thought of Franklin as a great mark of the footy, but with those 2008 numbers, and the company they put him in, maybe we are too harsh on him?

Franklin has been close-ish since. He has had the marking component covered in both 2016-17, but his goal tally has fallen well short. His closest effort came in ’16, when he bagged 81 goals.

And now we move to the guys who were able to back up their performances.

Peter McKenna was mentioned above. His 1970-71 seasons set a benchmark in this stat that was not equalled until 18 years later. His combined totals over that two year period are 323 marks and 277 goals.

Matthew Lloyd was another who went back-to-back with 100-150 seasons. His best season was in 2000, when he dragged in 185 marks and had 109 goals. He followed that up with another impressive haul of 158 marks and 105 goals. Lloyd had beautiful hands and was a reliable kick for goal, converting at over 68% for his career. Makes you wonder why Matthew Knights wanted to use him in a different role…

As good as Lloyd was, Tony Lockett was a class above again. Plugger managed to pull off the feat three times. His first trip to the power forward’s statistical Everest occurred in his 1987 Brownlow year when he slotted 117 goals to go along with 164 marks.

Five years later, Lockett was at it again, compiling an even more impressive set of numbers. His 132 goals were accompanied by 157 marks in 1992.

In 1996, Lockett proved that his move to the Swans had done nothing to hamper him when he kicked 121 goals to go along with 168 marks. As if you needed another reason to worship Lockett as the greatest full forward of all time, right?

And this “more” may just swing one or two easily swing-able people to the side of Jason Dunstall in terms of all-time great full-forwards. You see, Dunstall is the only man in history to hit this statistical mark four times.

The Hawthorn full-forward first hit the mark in 1988 when he slotted 132 goals and took 185 marks.

He then outdid himself with 138 goals and 207 marks in 1989. Amazingly this would make him the only man to ever kick one hundred goals in a season, and combine it with 200 marks.

Three years later he almost equalled his 1989 output. His 145 goals in 1992 combined with 199 marks, robbed by one grab of the chance to sit clearly atop this stat with no chance of someone catching him. This season also marked the year that Dunstall recorded an amazing 17 goals, 5 behinds against Richmond. He also dragged down 18 marks that day. It was a once in a lifetime season.

Dunstall finished his quadrilogy of forward dominance with a 123-goal, 166-mark performance in 1993.

Of the current crop of players, who could possibly match the feats of those mentioned above? Is there anyone who could go near making the 100-150 club, or is this exclusive AFL statistical club closed for admissions for good?

With a shortened season in 2020, admission to this club is postponed, at least for the conceivable future, and given the drop-off in scoring numbers, and individual goal tallies, the door may remain closed. People speculate whether we’ll ever see a forward kick a hundred goals in a season at all; combining it with 150 marks is the stuff of boyhood dreams – unless you’re one of the players named in this article.

There are some great names on this list. Dunstall’s achievement is actually quite unbelievable. I cannot see his standing atop this category ever being challenged, let alone broken. A season with 150 marks and 100 goals the way the game is currently being played, with team defences and very little room to move in the forward 50 could be close to the best season by a forward of all time.

Like this? There is a heap more content coming for members. Join now, and get all this coming season, and a bit of next with an annual membership (or stick to monthly if you prefer). Click the pic below and get started… and help our site grow.