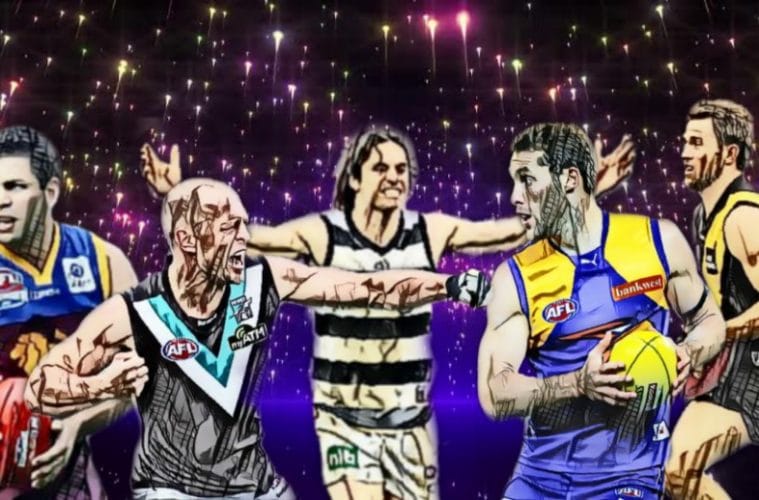 Over the past month and a bit of footy-less drudgery, we’ve found ways to occupy ourselves.

Some of us have delved into the TV series we always wanted to watch. Others have reacquainted themselves with the almost lost art of reading a book (and thanks to the Eagles and Tiger fans who have purchased our Season Review ebooks for your team’s premiership year). And here at The Mongrel, we’ve looked back into the archives to find the stories within games, years and for the purpose of this series, decades.

We trotted out our rankings for forwards, mids and defenders for the 1990s, and have now moved onto the 2000s, with the midfielder rankings revealed last week.

Time for the defenders.

The decade spanning from 2000-2009 was one that saw a multitude of defenders stake a claim as the best in the game at given points.

As a way of identifying this, one just has to look at the spread of All-Australian defensive positions that were allocated in the decade. 40 different players secured places in the All-Australian team over the course of this ten seasons, with just one having more than two appearances. Look there are no prizes for guessing which player that was, and he will feature heavily at the pointy end of the countdown, but it really gives perspective when it comes to how even the rest of the individual defenders were this decade.

I suppose some would argue that this was the decade that saw defenders become more mechanical… more akin to automatons jumping, punching the ball and doing it all over again, but the names tell a different story. Edwards, Wanganeen, Hodge, Fletcher, Wirrpanda, Cornes… they were just as prevalent when it came to marketability as many of the midfield or forward stars of the time.

But there were just so many of high quality that you could throw a blanket over a group of 10-15 after the first few.

The results for this were tight at some points, and some of the results might surprise. It is worth noting that we are assessing defenders across the board – not just the contest killers, or the intercept marks, but the run and carry players, the release players, and those who were able to lock down a forward without collecting much of the footy. And of course, those who got a heap of it.

When reading, please keep in mind that these rankings only take into account achievements and accolades acquired during this decade. Wanganeen’s Brownlow doesn’t count – that was in the 90s. Nor do two of Darren Glass’ four All-Australian selections – they came in the next decade.

So, if you see something that doesn’t seem quite right, there is probably a very good reason for it.