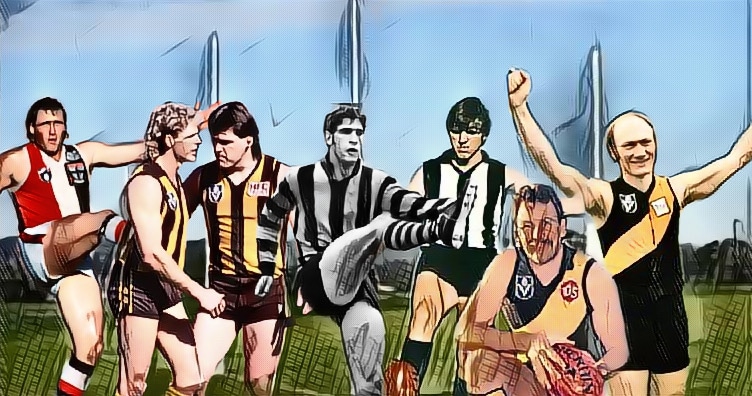 The Best Goal-Kicking Duos In History

Who are the best goal kicking duos in the history of the V/AFL?

It’s a pretty simple question, and if we’re looking at results as our guide, it should be pretty straight forward to find answers.

However, there are several ways we can look at it to get where we need to go. Do we look at duos over a longer period of time to take into account the period in which they played together? Do we assess duos in terms of whether they contributed to overall team success? Or do we look at raw numbers in an individual season?

That last one is probably the easiest, and those who have read my stuff here over the journey know that I am all for the path of least resistance. So, what we’ll look at here is the single seasons that saw the best one-two punches in the game at their peak.

Below, I’ve ranked the top 25 seasons by a pair of forwards on the same team. Look, in all honesty, I may have missed one here or there – I researched it with a three year old insisting I watch The Lion Guard (It’s an off-shoot of The Lion King where Scar returns to the Pride Lands in the form of some kind of lava ghost to fight Simba’s son and his animal friends. Pretty weird stuff…).

As always, I’m happy to be corrected on the list… nicely.

The results for a top two finish are in parentheses after each listing.

So, how important is a two-pronged attack in the history of the game? 14 of these 25 combinations have played in Grand Finals the year they combined to make the list, with eight of them claiming flags.

Hawthorn has been absolutely blessed with forward talent from 1970 onwards, with six separate combinations making the list for a total of ten out of the top 25 performances of a forward duo of all time. That is an amazing number, and would give a great indication as to how important dominant forwards are in terms of sustained team success, particularly given Hawthorn’s run over the last 50-odd years.

The most recent duo on the list is the Buddy/Roughead combination, which really turned the clock back in 2008. Look at the names around them – Pratt, Hudson, Roach, Bartlett, Todd… and there are Buddy and Rough thrust right into the mix. It truly was an amazing season in 2008, and the fact that this throwback to the days when forwards were THE dominant force in a team resulted in a premiership may not be the last time we ever see it.

I was quite surprised to see Paul Hudson’s name bob up twice, but had he possessed a different surname, my guess is that he would be spoken about with a touch more reverence in AFL circles – he also had two ripping 50+ goal season for the Bulldogs but was always better as the second option, capitalising on someone else getting the best defender.

The Gehrig/Riewoldt combination of 2004 is quite underrated in terms of historical significance. Gehrig’s ton was wonderful, but Riewoldt’s role as second option was brilliant.

And I was glad to see the Lloyd/Lucas combination make the list as well – Lloyd gets a lot of recognition, and rightfully so, but Lucas is very underrated outside Essendon circles.

Some duos are obviously dominated by a full forward having an amazing season. With players like Peter Hudson, McKenna, Dunstall and Pratt all having 140+ goal seasons at one time or another, so it was quite gratifying to see some combinations in the top ten where an individual player didn’t kick 120+ goals.

The 1980 premiership season of the Tigers, with Roach and Bartlett combining for 196 goals was one of the best true one-two punches in history. When you get a second option kicking 80+ goals, you know you’re doing something very, very right.

The Hudson-Matthews combination of 1977 failed to make the Grand Final, but are the only duo in history to ever top 200 goals between two players. I doubt we’ll ever see a combination like them again, however the Buddy and Roughead combination just 12 years ago gives a glimmer of hope that great forward combinations may not be completely dead and buried.

Finally, I know this is a very Victoria-centric article, but the big bags of goals came primarily in a time before the VFL switched to the AFL.

The best for each non-Victorian team are as follows. I’m treating Brisbane as commencing in 1987 as I am not sure what supporters actually prefer. If you want to claim the Quinlan/Conlan combo, go for it. I would – they were fantastic. Same with the Swans – I’d be taking Pratt’s accomplishments, but if we want to concentrate solely on 1980 onwards, then we can.

As always, if you’ve got a few to add, please do so. And if you could consider becoming a member to support our site and help us grow, it is always greatly appreciated.