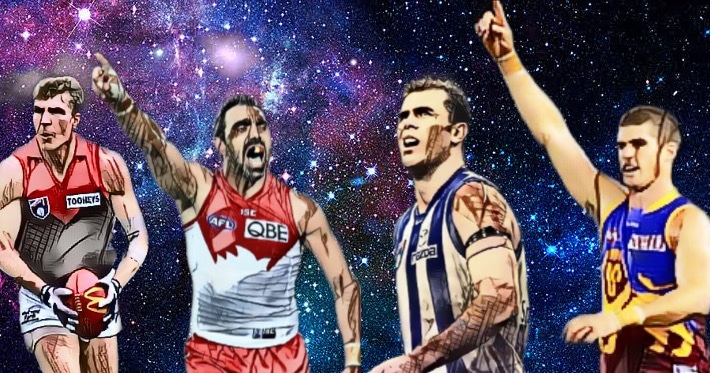 The Best The Mongrels Have Seen – Volume Two

The Best The Mongrels Have Seen

Easter Weekend, especially this year, is as good a time as any for contemplation. Without the noises of footy around to permeate lounge rooms around the country, Easter Sunday was, due to this and, of course, a number of other factors, quieter than it has been in previous years.

With that in mind, the Mongrel Crew have decided to develop the Best Teams We’ve Seen from each club. Due to the diversity in ages of our groups, some of these teams stretch back to the early 80’s, while others are more limited in scope. In this edition, Trent looks at Brisbane, Melbourne and Sydney, with a contrasting Sydney team provided by Nick Sluggett, and HB Meyers gives us his best North Melbourne team.

Before we continue, here’s part one, featuring St Kilda, Freo, Adelaide and the Western Bulldogs.

The Best The Mongrels Have Seen – Volume One

The Brisbane Bears/Lions team is dominated by the mighty three-peat era, with 14 players selected from the brutal Leigh Matthews-led dynasty featuring in this all-time squad. The spine virtually picks itself, with possibly only Daniel Bradshaw with almost 500 goals to his name an argument to replace Lynch, but he slots in nicely in a forward pocket.

The Beatles may have been the Fab 4 but they find stiff competition for that title with the incredible mix of skill, flair and brutality possessed by Voss, Black, Akermanis and Lappin, throw in Luke Power as a massive upgrade on Pete Best and you’ve got a midfield that’s bigger than Jesus.

There is a solid mix from the early days, with two-time club champion Johnny Gastev, perennial Brownlow favourite David Bain, and silky smooth Scott McIvor selected. Alongside them were big name recruits from the VFL, such as ‘85 Brownlow Medallist Brad Hardie who turned in a meritorious 2-goal per game average across 100 games in a very poor side, and Roger Merrett who managed to transition from his hated public profile as the Hitman to become a lovable but still aggressive fan favourite who led his team to its first taste of finals in ‘95.

The less successful modern era is also captured with the dynamic Tom Rockliff, who apart from being a staple of SuperCoach midfields for years, was an absolute ball magnet and tackling machine, Stef Martin the undersized but absolute star ruckman, and four-time Merrett/Murray trophy winner, the inspirational Dayne Zorko.

Hard luck stories abound, probably none more so than Magic McLean who won two B&Fs but was cut down by injury in his prime, and Darryl White, another Territorian with incredible skills.

I watched from around 1980 onwards – dragged with my family to games from probably about ‘78 onwards, but I was too young to take notice at that point. Around ‘80, I started recognising players, where they played and their influence. As such, I only saw the declining years of Dench, Greig and Dempsey, but Dempsey in particular, and the way he could control a game, stood out. He had great positioning and I am still not sure I have seen a more complete ruckman. Doesn’t get anywhere near enough credit as the dominant ruck that he was, and I have been extremely grateful to find a few of his games on DVD in recent years.

Glendinning at his best was absolutely incredible. He would be one of the best intercept marks in the game right now. Easily.

The Krakouer Brothers were a revelation, and the sense of excitement in the crowd whenever they combined was thrilling. I always preferred Phil, but looking back, Jimmy was probably more of a threat over his entire career.

People forget how good Wayne Schwass was at North before he left – two Best and Fairest awards as the Kangaroos really started asserting themselves in the 90s.

And no Ben Brown? Not yet. I don’t think he can replace Blight or Longmire just yet.

Wait a second, why is the seven-time leading goalkicker named as CHB? Well, this can be answered in two ways, firstly and for those who weren’t around in the early 90s you missed out on possibly the greatest showman the game has produced. A mulleted extrovert from Western Australia named Allen Jakovich, despite not kicking a goal in his first game, and then being banished to the reserves for 9 weeks, still managed to become the fastest player to 100 goals in VFL/AFL history – injury and temperament prevented him becoming the legend his talent demanded. Secondly, Neita was a star at both ends, and duly acknowledged with AA selection in the defensive fifty, so he makes way for a rare star.

No Flower? Calm down folks, he was obviously a great, but this side is selected nominally from 86-onwards when the great Tulip was on his last legs.

This might be difficult for long-suffering Dees fans to hear, but in the 92/93 seasons David Schwarz and Stephen Tingay were every bit the equivalent of the established premier players in the 90s at those positions, Matera and Carey. It’s not a significant stretch to suggest if the injury gods had been kind, then in the 97/98 era Melbourne may have broken through for that elusive premiership victory craved by so many whose hearts beat true for the red and the blue.

Ricky Jackson, the lightning quick goal sneak of the late 80s nudges Aaron Davey due to a superior finals record, and Melbourne’s dearth of key position competition is more than adequately overcome by serious ruck options. The immortal Jim Stynes and behemoth Max Gawn make this side, but serious quality from the likes of Jeff White and AA Mark Jamar just miss out.

In recent times, team success has been scarce, however individual accolades abound with AA gongs for Oliver, Gawn, Frawley, McDonald and Jetta.

I have a good level of interest in the Swans. This list is based on my experience following them as a secondary team, from approx 2000 onwards. I flirted with Adam Schneider, Jarred Moore, and Darren Jolly, but just couldn’t fit them in the end. Seeing more of the current brigade probably put them in the favourite position.

I hold vivid memories of the Swans as everyone’s second team after they moved to Sydney, the regular Sunday TV slot, and later the electrifying late 80s in the Edelsten years. Those sides, particularly in 86 and 87 were genuinely capable of winning the flag – and so they should have been with the flamboyant doctor opening his chequebook and using the VFL as his own private shopping mall, but just fell out of form at the wrong time. A run I’ll never forget was from rounds 16 through 18 in 1987, when the Swans scored 201 (won by 130), 236 (won by 163) and 198 (won by 91); I don’t recall a team ever playing better than they did at that time.

This side was filled with the biggest names in the game at the time; the outstanding and unyielding midfield with Brownlow Medallists, Greg Williams and Gerard Healy, and the extremely unlucky to miss Barry Mitchell consistently winning the ball and moving it forward at all costs. The exquisite kicking skills in both range and accuracy from Bayes and Carroll, the former with the grace of a Swan, the latter brutal in his execution, and the explosive pace and again long and accurate foot passing by David Murphy gave ample opportunities to their true superstar in the goal square.

Nowadays a parody of himself, Warwick Capper could really play football as goal tallies of 92 and 103 in those high-flying seasons attest. He can rightly be considered alongside Knights, Barker, Modra and Howe as the greatest aerialists of all time, and his accuracy of mid-high 60s is elite.

Alongside the Wiz in the forward line however are a glut of stars; the all-time record holder, Tony Lockett, the last man to burst through the fabled 100-goals in a season barrier, Lance Franklin, the immovable object, Barry Hall who averaged almost 3 goals per game in a much dourer team, the extraordinary Micky O, and the enigmatic Nick Davis, who to Swans fans would rightly earn his place in this side for just one quarter’s work in the ‘05 Semi Final.

The underappreciated Nick Smith takes his place in the back pocket, and 2-time Brownlow Medallist Goodes slots into the first ruck position. Now it’s probably not his natural role, but he did win Chas there, and I’d back him to work over anyone he came up against. Modern day tyros Parker, McVeigh and O’Keefe make the bench in this ultra-competitive side stacked to overflowing with star appeal.

So there you have it. Obviously this is more than anything a fun exercise, but how did we go? Who did we miss? And which Sydney side would win if they were to play one another at 3.20pm on a Sunday arvo at the SCG? Stay tuned for our next instalment, detailing the best sides of Geelong, Port Adelaide, Richmond and West Coast.

MEMBERS – Players From Then Who Could Still Cut It Now