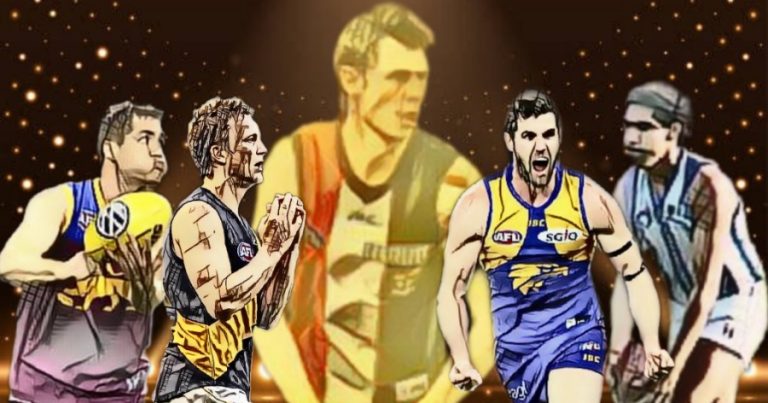 Named after Justin Koschitzke for his run as the best player in the AFL for a very short period.

From Round 14-17 in 2005, Justin Koschitzke was unstoppable and sparked his Saints to a four-game win streak in that period. How good was he?

Over those four rounds, Kosi posted the following averages.

Not bad for a forward pinch-hitting in the ruck.

Long regarded as St Kilda’s number two forward, he made a huge step in that period and looked like the most dominant player in the league. Aaaand, then he went back to being Kosi and kicked three goals in the final four rounds of the season. Of course, the hit from Daniel Giansiracusa in 2006 kind of changed Kosi as a player from that point on.

Anyway, it is only apt that we name this award after the player that promised so much in that brief period and teased the hell out of St Kilda supporters. Ladies and gentlemen, I give you, the Kosi Award Winners.

I was tempted to call this the McAdam Awards, based on how Adrian started his AFL career, but I reckon that would be a disservice to his more consistent brother, Gilbert.

In a forward line already featuring the talents of John Longmire (coming off a season where he managed 64 goals) and Wayne Carey (46 goals), McAdam burst onto the scene in Round Five, snagging goals like his name was Allen Jakovich.

In his first three matches, he booted seven, ten, and six goals, setting the footy world on fire. Imagine someone rocking up and posting those numbers right off the bat these days? We’d have people on Reddit (where I found the idea for this column from, by the way – thanks) claiming he’s the best player in history.

Whilst Adrian would have several more moments throughout the 1993 season (he kicked nine in Round Six against Collingwood, and another six against the Bombers in Round Ten), nothing compares to his blistering first three games.

For the record, he finished with 68 goals for the year, combining with Longmire (75) and Carey (64) to give North one of the more potent forward trios in the game.

Coaches aren’t dumb. Sure, they do some dumb things, but they can see certain things in games that opposition players like and don’t like. McAdam did not like the rough stuff, and an opponent who niggled him and continued to obstruct his run at the footy was just what the doctor ordered.

He played just 36 games, with just one coming in 95, before exiting the league.

Sometimes, it is not how long a candle burns, but how bright the flame that matters, and in 19993, no flame burned brighter than that of Adrian McAdam.

Hi, I’m Aaron Hall – you may remember me from such roles as half-back flanker who wastes the footy too much at North Melbourne, but this week, I am the Gold Coast version, who bolted out of the blocks to start the 2016 season.

So good was Hall that after three rounds, he was averaging 36 possessions and registered nine Brownlow votes as a result.

Unlike Matt Rowell, however, Hall wasn’t driven into the ground, derailing his season and seemingly, his career (I know Rowell has been forced to play a defensive mid role… settle down, Suns fans). He played a handy role for the remainder of the 2016 season, finishing the year averaging 27.82 disposals per game.

Darling wasn’t just good to start the 2018 season – he was brilliant.

Up until he rolled an ankle in a marking contest in Round 11, Darling, in my estimation, was playing the best footy in the game.

How good was he?

Let’s have a look.

He kicked three or more goals on seven occasions.

He took three or more contested marks on five occasions

And in that period, the Eagles went 9-1.

Darling would sit out six rounds as his ankle took time to heal, and whilst he was able to find some of the same form later in the season, his brilliant start constitutes the best period of his career.

Brown was a special talent. Sure, he might be a betting ad flog these days, but after his first season in yellow and black, he was in the process of putting together a special season.

Doing what many have failed to do since, not only was Brown averaging 20.4 disposals per game, he was also averaging over 3.5 goals, which puts him in a very elite class of footballer.

However, after kicking two against the Dees in Round Ten, tragedy struck, with Brown’s leg buckling underneath him and snapping in two. Matthew Whelan fell across Brown’s leg in one of the more gruesome injuries the game has seen.

Brown was 27 at the time – at the peak of his powers, and looking like he would be a huge factor as the Tigers rolled toward September, but that moment changed everything. The Tigers were 7-2 when Brown went down.

They ended up 10-12, falling in a heap, and whilst Brown would return in 2006, he was never the same player again. The moment was gone, and though he was still handy, he never again approached being the best player in the game… and there is a strong argument that prior to his broken leg in 2005, he was close to being just that.

How about that Brisbane midfield, huh?

We always talk about Voss, Akermanis, Black, Lappin… but we never really mention Des Headland, do we?

But for a six-game period in 2002, Headland’s name would be included with those names thanks to a purple patch of form.

A number one pick, Headland would add the 2002 premiership to his CV before heading to Fremantle for phase two of his career. However, without the same level of midfield support and perhaps due to his work ethic falling away just a little, he never again reached the levels of that six-game stretch.

There were quite a few who thought Taylor Walker was cooked after a less-than-impressive 2020 season in which he looked slow and lethargic.

Of course, Tex wasn’t 100% healthy and coming into the 2021 season, was determined to prove his detractors wrong.

Walker staked his claim as the best power forward in the game in the first three weeks, kicking 17 goals and making the Adelaide Crows look like a strong unit through the first month of the season, carrying them to a 3-1 record.

A calf injury slowed him down not long after, but Walker left no doubt in the minds of many that when fit, he still had the ability to control a game and being a key for his team. He finished with 48 goals for the season and backed that up with 47 in 2022 just to prove that was no fluke.

To say Allen Jakovich burst onto the scene is not quite correct.

He played in Round One of the 1991 season and didn’t reappear as part of the senior side until Round Ten.

It would be three more rounds until we saw him again, but from Round 15 onwards, it all clicked for the Melbourne full forward. He started with eight goals against the Swans, then followed up with consecutive bags of six, six again, eight, seven, and 11 as he set the AFL on fire.

It was such a shame that the MCG was undergoing works at the time, as several of Jakovich’s miraculous goals came at the end of the ground where there were no fans. Still, that could not diminish his brilliance. He finished the season with 71 goals from 14 games, but it was the stretch from Round 15 through to the Semi-Final that we’re focusing on, here.

In that period, Jakovich averaged an incredible 6.7 goals per game at a time that also boasted players like Tony Lockett, Jason Dunstall, and Gary Ablett Senior working their magic.

Sadly, Jako was hampered by a back injury and after 14 games in 1991, managed just a further 40 games before it was all over, with his last seven games for the Western Bulldogs in 1996 a far cry from the lofty heights of his 1991 brilliance.

So, that is just a few I reckon would be Kosi Award winners. Happy to add a few more to the list if you’ve got them, but please… not blokes who are already acknowledged as one of the best players in the game over a longer period.

Also, no blokes who put in one blinder and then disappeared. Yeah, you Dean Polo with your burner accounts!

We’re looking for purple patches of form. Who you got?