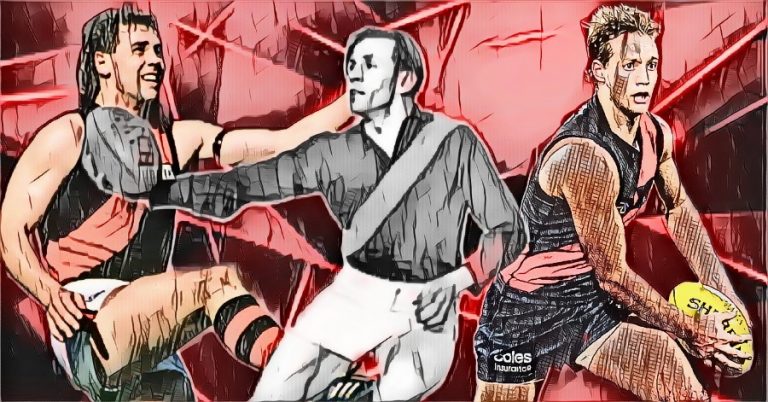 Essendon By The Numbers – Number Three

There are two distinguishing features that identify an AFL player when they take the field:

In years gone by, these pigments were dyed into the wool and emblazoned across the chest of a player with the utmost pride, representing the football club in which those colours symbolise. Today, those same colours are sublimated into the modern polyesters that make up a scientifically designed uniform that is specifically created and tailored to achieve optimum comfort, aerodynamics, breathability and numerous other key factors.

Whilst an argument can be fairly mounted that the sentimentality behind wearing your club’s colours has long dwindled in comparison to yesteryear, there is no question that in a generation where various medias rule over our existence, a club’s colours are as more a part of their individual identity and branding today as they have ever been.

Whilst the colours signify which team a player represents and quite often symbolise a core part of that club’s history, it’s the numbers across a player’s back that identify them as an individual. Even though Australian Rules is a team sport by every definition of the term, there always has and always will be an individual element to the sport. Some numbers are held in high esteem for clubs because of who has worn them in the past, some clubs have dedicated numbers for specific types of players, or positions within the club’s leadership group. Although the colours make you the player that you are for that particular team, your number is what makes you who you are as an individual within that team.

Funnily enough, having numbers on guernseys was opposed by many within the sport for a number of years. The only time jumper numbers were ever widely accepted was when an interstate side toured for a sports carnival or promotion.

In fact, it wasn’t until 1903 in a promotional match held in Sydney that Fitzroy and Collingwood would become the first side to have numbers allocated to each player in a game for premiership points. The League distributed cards to all 18,000 mostly first-time spectators with the rules of the game and numbers to help identify players.

In what was initially a financial decision, two sporting goods companies that provided the guernseys to clubs decided that wearing a small number on each player’s breast would aid spectators in identifying lesser-known players, and also aid the coffers of the football clubs that could then sell a program at the gates with each player’s numbers for fans to identify.

After some trial and error was met with a generally negative response from fans being unable to read the small numbers on the jumpers’ fronts, the decision to try larger numbers across the player’s backs was made and well received. It wouldn’t be until the 1912 season that the VFL would mandate numbers on players’ backs and assign regulation sizes and colours, after much reluctance from clubs in seasons prior.

With that being said, the Essendon Football Club is an old team with a rich, proud history spanning back into the 1870’s. They are one of the most successful and well-known sporting clubs in Australia and over the years have fielded some of the greatest players to have ever played the game. In this series, I will look at each individual guernsey number within the club and profile some of the best players to have represented the club whilst wearing it.

Bio – After spending five seasons toiling as a half forward and part-time wingman, an abundance of injuries to key ball-winners early on in 2021 saw Parish thrust into the hustle and bustle of the Essendon midfield, where he fastly proved exactly why the 25-year-old was taken at Pick #5 in the 2015 National Draft. Using last year as a booming breakout year,. Parish came second in the Crichton Medal last season, whilst earning his first All-Australian nod and winning numerous best-on-ground awards in the club’s biggest games of the season. Unfortunately for Parish, injury setbacks amidst some poor form and the shaky economy of the club currently led to a season that didn’t quite reach the same heights that we saw last year. At his best in a functional side, Parish ranks amongst the best inside midfielders in the competition.

Bio – Perhaps the most iconic Bomber of all time, King Richard Sylvannus Reynolds is widely regarded as one of the greatest personalities to ever hold a place within the game of Australian rules football. Having captained and coached over 700 senior games, being one of only four players to be named a three-time Brownlow Medallist, winning seven Crichton Medals and four premierships, Reynolds is ranked by the club as the number one Essendon player of all time. Remembered by his peers as the classy rover and efficient goalkicker that he was, Reynolds paved his career as a strong-bodied midfielder with sublime hand skills, enviable balance and thanks to his strong build, a terrific dual-ability to take a high mark and also win the ground ball, often beating his opponent to the clearance thanks to his genius understanding of the game. Later in his career, Reynolds made the shift to a hybrid role not often seen in the game back then, playing as a high half-forward and ruck rover that really broadened the horizons for players of his type, forming a new role within the game that’s still commonplace today.

An inaugural legend in the AFL Hall of Fame, Dick Reynolds is perhaps the best known Essendon player of all time, making his number three a prestigious one to the club.

Bio – At one point the best full forward in the game, Paul Salmon’s sheer size was something unseen in the AFL until his debut, standing at 205cm. Thanks to legendary ruckman Simon Madden being in the same team, Essendon had the luxury of playing Salmon predominantly at full forward in his earliest years, where his athleticism and marking supremacy made the young prospect one of the hottest tall tickets in the game. After a destined move to the ruck was ultimately fulfilled, ‘Fish’ continued to dominate, despite a number of injuries that threatened to curtail his career. Although Salmon would spend five seasons at Hawthorn in the latter stages of his career, he did return to Essendon for the 2002 season, playing 15 games. Remembered as one of the game’s best ever State of Origin players, kicking 45 goals from his 14 representative games, Salmon was a big game player that finished his Bombers career with seven leading goal kicker awards, two premiership wins, three All Australian selections and a membership into the Essendon Hall of Fame, also being the unfortunate number 26 selection in Essendon’s Champions of Essendon list of 25 players, narrowly missing selection.

Bio – A dual premiership ruckman and best and fairest winner in 1928, Beckton captained Essendon for two seasons and represented Victoria in numerous state carnivals. Being regarded as one of the premier ruckmen of his era, regularly winning games off his own personal dominance with a rare ability to rove his own ruck work and use his size as an offensive weapon. Described by The Globe newspaper in 1926 as a “strong, powerful footballer” and “an exceptionally well-developed man possessing height, weight, strength and reach – all the credentials of a high-class follower”, with the publication marvelling that Beckton would undoubtedly be one of the biggest footballers in the country standing at 6’2 and weighing in at 15 stone.

Bio – Yet another highly rated, best and fairest winning ruckman that donned the number three, John Gill had the football world at his feet. Noted in newspapers from the time as possessing a strong, dependable pair of hands and an ability to easily find his rovers with his terrific hand eye coordination and tap work, Gill led all comers to be Essendon’s premier followers. Standing at an imposing 6’4, he would represent Victoria as their starting ruckman, win the club’s best and fairest award narrowly ahead of champion Bill Hutchinson, be called an equal to John Coleman, and also go on to marry the prestigious Queen of Mildura, as awarded at the raisin festival. A highly respected footy mind, Gill fielded many offers to coach prominent country football sides all throughout his playing career, even having a clause added to his Essendon contract to be able to leave at any time, an option he would eventually take ages only 25, options to retire from full-time football citing pressure at work as his reason.

Bio – Ryan ‘Rhino’ O’Connor was recruited out of Tasmania as a hard working ruckman that made up for his lack of pace with a strong overhead mark. A dominant season in 1995 propelled O’Connor into a forward half force, assuming ruck duties whilst also kicking bags of goals. An unfortunate car accident in 1997 caused injuries that largely curtailed O’Connor’s form, before being delisted and recruited by Sydney.

Bio – Ian ‘Porky’ Payne played in the centre and occasionally at half-forward, and is remembered we being one of six Essendon players conscripted to fight in Vietnam. After 22 games across three seasons at the club, Payne was called up for national service and spent two years out of the VFL, spending six months in Nui Dat and six months at Vung Tao. Returning and recommencing his playing career in 1969, Ian was the younger brother of Essendon’s Charlie Payne.

Bio – Albert Clarence Armstrong was a crafty full forward for Essendon, playing alongside his older brother Lou and leading the club’s goalkicking in 1910 and tragically missing both of the club’s 1911 and 1912 premiership winning teams through injury. Being known as a player that thrived when the weather was at its worst, Armstrong managed 42 games before succumbing to a serious case of sciatica which in turn ruined his VFL career.

Bio – A reoccurring theme with Essendon players to wear the number three has been ruckmen or players ravaged by injury. Scott Gumbleton falls into the latter category sensationally. Taken with Essendon’s coveted Pick #2 in the 2006 National Draft, Gumbleton had huge wraps as one of the most skilful big men to enter the draft system in quite a number of years, famously, but at the time rightfully selected before other fellow top picks such as Travis Boak (#5), Joel Selwood (#7) Nathan Brown (#10) and Jack Riewoldt (#13). One infamous story going that Essendon keenly eyed off Joel Selwood, but were advised that his reoccurring troublesome knees wouldn’t allow the future Geelong premiership captain to play past age 25 – the definition of irony, givent hag Gumbleton’s 35 game career was cruelled by injury. The wiry forward finished his career at Fremantle, requesting a trade for more opportunities late in his career. Best remembered as a much-loved teammate and supporter favourite, robbed of the chance to flourish.

Bio – Widely recognised as a three-time premiership player, two time All Australian, best and fairest winner and iconic Norm Smith Medallist. Unfortunately, he achieved all of these accolades before the final two years of his career spent at Essendon. After a distinguished career at Geelong, Paul Chapman was traded to Essendon to play out the final few seasons of his career in a struggling Essendon side, where Chapman continued his aggressive midfield bravado and thrilled fans with some memorable goals and moments in the forward line.