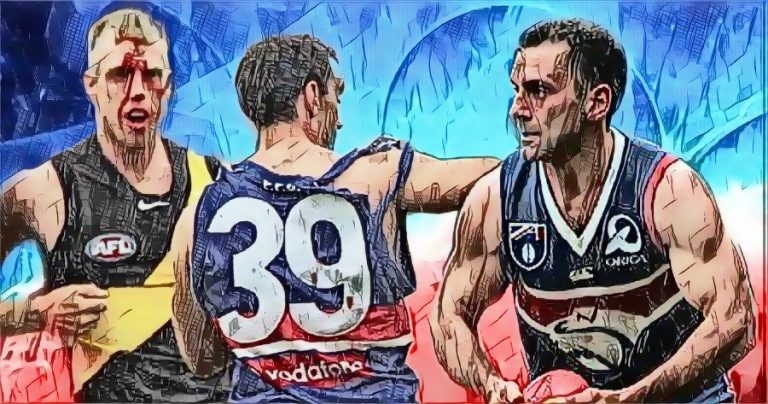 I am not sure there has ever been a player like Tony Liberatore, but I am pretty damn sure we’ll never see anything like him again.

At a diminutive 163 centimetres, or 5’ 4” for the older blokes, Libba was a player who constantly fought out of his weight range. And constantly won.

At every grade of footy, Libba was, at one point or another, the best player in the game.

Hard to believe? Don’t take my word for it; the results speak for themselves.

Libba played in the precursor to the current Under 18 competition. Pulling on the jumper for the Kangaroos, Libba was judged the best player in the then-VFL feeder competition, the Under 19s, winning the Morrish Model in 1984.

Following his triumph, he contacted several clubs to obtain a chance at a senior career, with Mick Malthouse offering him the chance to train with the Bulldogs, but ensuring Liberatore knew that there were no guarantees when it came to his spot. Once there, Libba played mostly reserve-grade footy over the first couple of seasons, where he won the Gardiner Medal, as the best player in the reserves competition.

Within two seasons of his reserves-grade win, Libba was wearing another medal awarded to the best player in the competition. This time, it was the Brownlow Medal that hung from his neck, making him the first and only player to ever be awarded the highest honour at all three levels.

Libba led the VFL/AFL in tackling for eight seasons between 1990 and 2000, with only a finals run from John Platten in 1991 giving the Hawk an extra game to snatch the lead, and a knee injury in 1998 keeping him from from extending his six-straight league-leading efforts at the time.

In his entire career, when you put aside his 1998 season, which he missed over half the season with an ACL injury (returning in record time, I might add), he finished top four in the league in tackling a ridiculous 11 times.

To put his efforts further in context, check out the below.

Libba’s best tackling season was 1994. He amassed 142 tackles – a pittance by modern standards, right? How about if I tell you that the game was an entirely different beast back then, and the entire Footscray team had 625 tackles in total?

Got your calculators out?

In 1994, before tackling was in vogue, Tony Liberatore averaged an incredible 22.73% of his team’s tackles. In a time people laud as being the best footy they can remember, little Libba was in the process of demonstrating the value of tackling when everyone else was trying to pick up a cheap kick. Darren Jarman was next best in when it came to tackling in ‘94. Still at Hawthorn, he had 83 tackles for the year, or 10.7% of the Hawks’ total tackles.

Libba was a freak!

As the game got quicker, and the little legs of Libba pumped a little too slowly, he was faced with a dilemma. The game was going past him and both he, and his coach at the time, Terry Wallace, recognised it. Libba would have to change the way he played to remain in the league.

And with that, a terrier was unleashed upon an unsuspecting AFL.

In the form of tagger, Tony Liberatore became a nightmare to deal with. Paul Kelly was often a target for the dogged Liberatore, who was accused of scratching and clawing both Craig Mcrae and Paul Kelly at points of his career. Liberatore received three weeks for clawing at Macre, but his tactics against Kelly only earned him the ire of the Sydney Brownlow Medallist.

Speaking about Collingwood tagger, Brodie Holland in a 2003 Herald Sun article,  Kelly said to be labelled the new Libba, as Holland had been, should force a player to rethink his football.

“You’d rather be known as a good player, I think,” Kelly said.

This prompted an extraordinary response from Libba.

“I’m really disappointed with Paul Kelly. I find it childish, very poor on his behalf.“

“What grudge he’s got against me I don’t know because last time I spoke to him he treated me OK, we had a chat, probably on Brownlow night. I find it very odd why he would bring it up? Is he jealous of Sydney’s success (because) he’s not playing footy, I don’t know. But once you finish footy, you get on with life and get onto the next chapter of your life. I just think it’s poor character of him to say that. The word champion is really loosely used these days and he certainly wasn’t a champion.“

Libba’s most famous indiscretion came against Richmond at the MCG, leaving Matthew Knights a bloody mess in the process.

Libba claims that it was Bulldog legend, Charlie Sutton’s catchphrase that led to his hit on Knights.

“Shop early and avoid the rush.”

“I took things into my own hands, I probably shouldn’t have done what I’d done. He was niggling one of our wingmen, Matthew Robbins, and I thought he’s pretty fired up. From the corner of my eye I thought he was going to come through and collect me. I just felt that something was going to happen, so unfortunately I did what Charlie Sutton told me. I got in first.”

Knights leaving the ground with blood masking his face is an iconic image, and it made Liberatore one of the most hated players in the caper. Still, Libba knew the value of a good, hard tag. And he knew when he had the wood on someone.

“When I’d line up on players straight away they’d go ‘I’m going to get beaten today’. They were just so mentally weak that I thought they were easy targets.”

Libba was not the first man to play a run-with role, but he took his tactics to another level, earning him the ire of fans all over the footy world.

How you choose to view him in hindsight largely depends on a few things. What team you support would be one – my guess is that, as a heart and soul player who made an excellent AFL career despite being too short and too slow, Libba would be revered by those who support the Dogs. Love him or hate him, the way he bounced back from his ACL injury, playing again in just 18 weeks is inspirational. He just wanted to win, whatever the cost.

Those who like a bit of biff in the game would also gravitate to liking what Libba dished up.

However, modern fans would recoil at some of the tactics used by Liberatore to get under the skin (sometimes literally in Paul Kelly’s case) of his opponents.

I don’t think a player has ever accomplished so much with such a limited amount of physical gifts to work with than Libba, and it is when I factor that in that I can marvel at the man who was tackling like a Bulldog long before tackling was a real key performance indicator. To lead a single statistical category for eight seasons is something we will not likely see again.

He was ahead of his time and a throwback simultaneously, and with a Brownlow Medal hanging around his neck, he is indeed a Superstar Villain of the game.