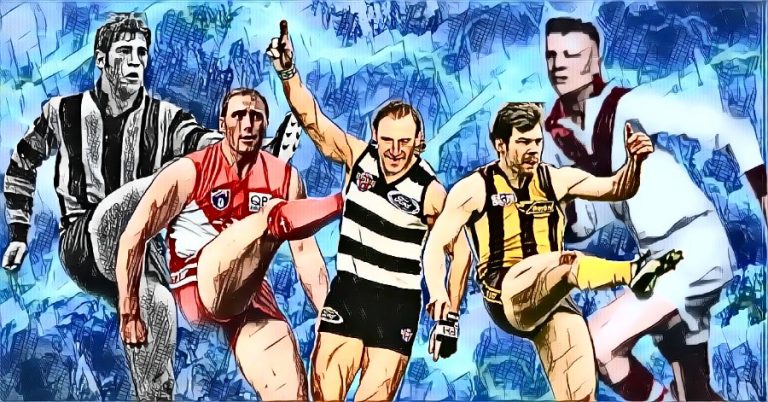 150 Goals – Those Who Got Close And Why They Failed

It has been thirty years since Jason Dunstall kicked 145 goals in the 1992 AFL season. At that time, amazingly, the record of 150 goals in a season still seemed attainable.

Fast forward even years and notions of that occurring have been well and truly shelved.

The days of the players kicking weekly bags of ten goals may be all but gone. Lance Franklin has managed it twice in his stellar career. Josh Kennedy has managed it three times, and Jack Riewoldt has three double-figure bags to his name, as well. Of the other big forwards, Tom Lynch has a best of eight goals, Tom Hawkins has never kicked more than seven, whilst his teammate, Jeremy Cameron, has hit the nine-goal mark once.

With teams looking to share the load between multiple goal kickers in the game currently, chances of seeing big individual bags of goals have diminished. Those over thirty would have fond memories of a time when it seemed that every week there was someone ramming home a big bag of goals. Immediately your mind turns to the 1990s, when Tony Lockett, Jason Dunstall and Gary Ablett all gave defenders nightmares.

Of course, there were a host of others who chimed in with big single-game goal totals during this period as well. Tony Modra, Peter Sumich, Wayne Carey, Matthew Lloyd, John Longmire, Stephen Kernahan, Dermott Brereton, Allen Jakovich, Fraser Gehrig, and Matthew Richardson all hit double figures in a game. It was a time when big forwards held sway. This wasn’t a case of one player being selfish. They were there to do a job, and if they got the ball within range, sharing the ball wasn’t what they were being paid to do.

Through this golden era, the big three reigned. Lockett, Dunstall and Ablett combined to kick ten or more goals on 50 different occasions. Let that sink in for a moment.

Lockett was the monster, outmuscling opponents and taking down any who would dare think about dropping in the hole to cut off his lead. Dunstall was the unspectacular, chest-marking converter, and Ablett was the amazingly acrobatic football genius. Together, they provided a three-headed monster that battled for the Coleman medal and owned it eight out of the ten years from 1987 until 1996.

But who was best? And who had the best shot at breaking that 150-goal barrier?