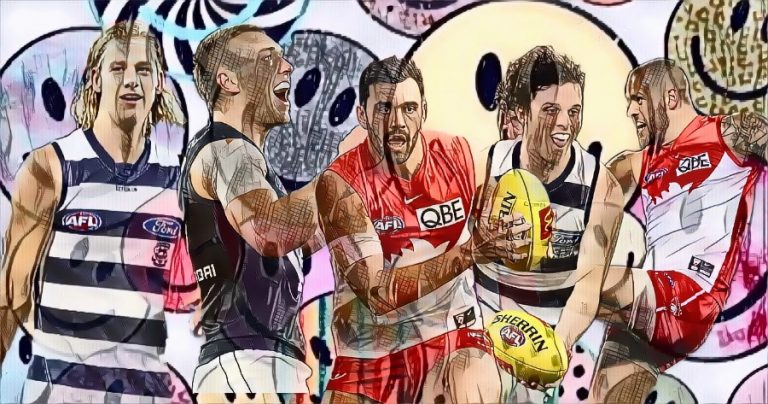 It’s been quite a day, huh?

It’s days like this that we all need some positivity, and damn it, speaking for myself, I know I definitely need it.

So, as the footy world lurches from controversy to controversy, I am going to go the opposite direction and concentrate on the stuff we should be happy about heading into the biggest game of the year.

I’m on a bit of a roll you see? My youngest daughter is off to have a sleepover at the eldest daughter’s house. My grumpy son is now happy as I found him a rusk to gnaw on, and Mrs Mongrel, after forgetting to organise some tasty food for Grand Final Day, was relieved when I suggested the local Lebanese Bakery that make terrific mushroom and cheese pizzas. Zataar Bakery… you guys rock!

Today, just call me The Positive Mongrel. Let’s jump in

MAX HOLMES IS A CHANCE TO PLAY THIS WEEKEND!

I’m still a believer that he’ll pose too much of a risk to take into the Grand Final, but how good is it to see Max Holmes stretching out at training at Geelong?

He looked cooked as he hit the bench against the Lions, clutching at his hamstring and appearing visibly upset as he banged his hands on the turf. They were the actions of a young man that thought he may have just blown his chance to wear a premiership medal.

Fast forward four days and there he is running around at Geelong training. Yes, the trainers are keeping a close eye on him, and it will come down to how he handles running flat out with sudden stops and changes of direction, but you cannot help but pull for the kid after the season he has had, forcing his way into a stacked Cats side this year.

It still might be a long shot, but the city of Geelong, and anyone who loves a good footy story, is pulling for ya, Max.

THAT WAS A GREAT BROWNLOW MEDAL COUNT

What a great way to cap the tenure of Gil McLachlan, huh?

Well, up until today, I suppose.

Anyway, despite shouts of “Lawyer’s Brownlow” from some, the man who has hoisted the Blues onto his shoulders so often that he may have completely buggered them, has been rewarded with the game’s highest honour.

Were you worried about Cripps a couple of years back?

I was. He was clearly struggling with his body (not like the way I struggle with mine… I am in the process of ordering fish and chips as I write this) and looked as though the years of doing everything for the Blues were catching up with him. But it was just a temporary lull.

Cripps’ season was filled with standout performances and despite both Lachie Neale and Touk Miller being in positions to win, it was Crippa’s night.

Me, I was barracking for Andy Brayshaw after throwing his name out there pre-season in our Mongrel Crystal Ball, plus I managed to snag a Brownlow Predictor card off ebay after the first month of footy and would have received a signed edition had he won. 25 touches and two goals… I would have given him three votes, damn it!

BUDDY GOING AROUND AGAIN IS GREAT FOR FOOTY

It seemed as though it was a very real possibility that we may have been about to see Lance Franklin play his last game this coming weekend, but his announcement of “one more” brought a big smile to my face.

After seeing legends of the game come and go, you learn to appreciate every chance you get to watch them in person. Buddy’s health and the modern plague prevented many of us from seeing him live as often as we’d have liked to over the last couple of years, but knowing there will be another chance to see the great man go around again… it warms the cockles of your heart.

And for some, it might even warm the heart of your cockles. I don’t know what you get up to.

For those who don’t go to the footy, I urge you to buy a ticket for a Swans game next season and sit as close to the fence as you can get, even just for the sound of it. I have vivid memories of Franklin taking off in a forward pocket at the MCG from many years ago, his boots tearing up the turf like an angry bull as he pushed off his opponent and made a lead. You don’t forget things like that, and we all have another chance to experience that in person.

Whether you love the Cats, or hate them like The Mongrel’s own Trent Adam Shields, you have to respect what they have been able to do in terms of their defensive posts over the last however-many seasons.

They’ve gone from household names like Scarlett and Enright, to Harry Taylor, to Tom Stewart, and now, they have another young star emerging, and if you’ve somehow missed the ascension of Sam De Koning, I suggest you open your eyes.

After one game in 2021, he has established himself as a mainstay inside defensive fifty for Geelong, elevating his game when required (and with the absence of Tom Stewart at times this season, he’s had to) and taking on some of the biggest jobs in footy.

He looks like a boy but he plays like a man, and I have to admit, I have been so impressed with the way he has used timing and his reach to combat some of the more powerful forwards in the game.

THE ATMOSPHERE AT THE SCG RIVALLED ANYTHING THE MCG COULD CONJURE

I’ve often written about the atmosphere at a big MCG final – it is electric. You almost feel as though the stadium, itself, is part of the action, rising and falling with every goal, tackle, and non-decision. Having been to many huge games there, I wasn’t sure it could be replicated, and I wasn’t sure we could get the same feeling – almost claustrophobic – on television as the wall of noise from the crowd had an influence on the game.

I’ve changed that perspective after watching the Swans and Pies from the SCG.

Half an hour before the bounce, that crowd was buzzing! You could tell it was going to be huge, and it was. The two teams delivered a classic Preliminary Final and the crows – incredibly passionate and vocal for both sides – were a huge part of it all.

It made a special game more special, and gave anything I’ve seen at the MCG a run for its money. Spine-tingling stuff.

It probably already is.

He was on the scrap heap, delisted by the Saints after so many concussion-related issues that it left him looking like a shell of the player that was taken with the number one overall pick.

But St Kilda’s loss has been the gain of the Swans, as he joined his brother in defence and has played a pivotal role all season for his new team. Whilst I am certain nobody begrudges McCartin all the success he is now enjoying, you have to feel for the Saints, who took McCartin ahead of a bloke named Christian Petracca and ended up with bugger all to show for it.

McCartin’s intercepting may be one of the keys to the game this weekend against the Cats. With Hawkins and Cameron commanding much of the attention, his role of cutting off the long, high ball inside 50 could be a decisive factor in the game. Back in their Round Two clash, Paddy had seven intercepts and seven spoils as the Swans restricted Hawkins and Cameron to just one goal between them.

They do that again, and it is difficult to see a way the Cats win. And wouldn’t that just cap off an incredible turnaround for McCartin?

BOTH MONGREL TITLES ARE UP FOR GRABS THIS WEEKEND

I love when this happens.

After five years of the Mongrel Midfield Title and the Mongrel Ruck Title, we have both titles up for grabs on Grand Final Day.

Members would have followed along this season as the midfield title bounced from Christian Petracca to Will Brodie to Chad Warner.

The Chad has held the title since Round 18, when the Swans knocked over the Dockers and Warner bettered Will Brodie in their matchup. He will defend the title against the likes of Patrick Dangerfield, Joel Selwood, and Cam Guthrie this week. To win, you’ve gotta be the best midfielder on the winning team.

As for the Ruck title, well… Darcy Cameron WAS the champ, however, given his team was knocked out by the Swans last week, he won’t be able to defend it this week. Tom Hickey played well, but Cameron’s 17 touches and a goal were enough to see him hold on…

… until I stepped in.

The title must be defended, with only a bye allowing a player to hold onto it without playing. The best ruckman on the best team will end 2022 as the Mongrel Ruck Champion.

Tom Hickey, Rhys Stanley, or hell… maybe Mark Blicavs sneaks in and snatches it away.

WHAT THE LEAGUE NEEDS

This is a little presumptuous, but given what else is going on in the footy world right now, a great Grand Final is exactly what is needed.

Whichever team wins, I genuinely hope that we get a brilliant, fast-paced, exciting game of Aussie Rules to make people forget, even for just a few hours, what else is dominating the headlines.

Here at The Mongrel, we will remain focused on the game of footy. Hell, we still love it, even when other aspects of the game try to make us love it a little less.

Bring on the Grand Final.

Now, time for some fish and chips.