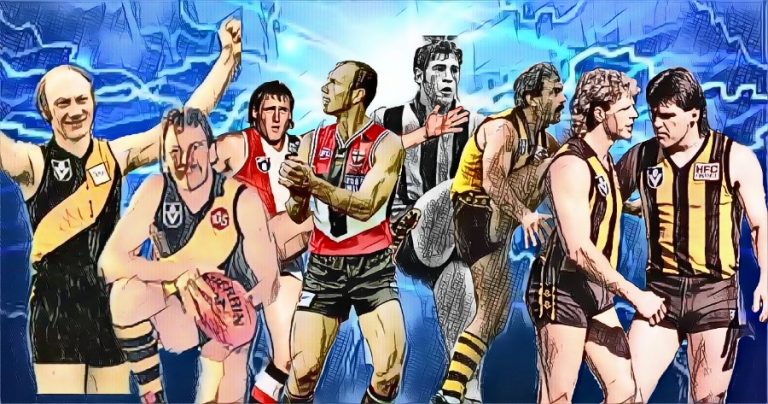 The Greatest Goalkicking Duos in History

With a couple of pairs hitting the scoreboard hard in 2022, I thought it might be time to delve into history to find where the pairings of Hawkins/Cameron, and McKay/Curnow fit into the equation, if at all?

At the time of writing, Hawkins and Cameron had combined for 52 goals through the first ten games of the season. If we take their average of 5.2 and apply it across 22 games, they’d end up with just over 114 goals to their name.

McKay and Curnow are on 47 goals, but with McKay only playing nine games, it’s a bit of a penalty. They’d be on track for a collective 103 goals.

I’ll just start by stating that these two are nowhere near it in terms of the greatest goalkicking duos in history. Miles off it, in fact.

So then, who are the best goal-kicking duos in the history of the V/AFL?

It’s a pretty simple question, and if we’re looking at results as our guide, it should be pretty straightforward to find answers.

However, there are several ways we can look at it to get where we need to go. Do we look at duos over a longer period of time to take into account the period in which they played together? Do we assess duos in terms of whether they contributed to overall team success? Or do we look at raw numbers in an individual season?

That last one is probably the easiest, and those who have read my stuff here over the journey know that I am all for the path of least resistance. So, what we’ll look at here are the single seasons that saw the best one-two punches in the game at their peak.

Below, I’ve ranked the top 25 seasons by a pair of forwards on the same team. Look, in all honesty, I may have missed one here or there – I researched it with a five-year-old insisting I watch The Lion Guard (It’s an off-shoot of The Lion King where Scar returns to the Pride Lands in the form of some kind of lava ghost to fight Simba’s son and his animal friends. Strangely… it’s not that bad!).

As always, I’m happy to be corrected on the list… nicely.

The results for a top-two finish are in parentheses after each listing.

Paywall… what a pain, right? Well, it is how we survive and keep the page clean of gambling ads. Yeah, that’s right – we don’t just talk about how bad they are, we just don’t accept their coin. This article is the seventh of six… yeah, that’s right – seven members’ articles this week. You can access this, additional exclusive columns, and get the game reviews from HB earlier than everyone else by becoming a Mongrel Member. Plus, you help us grow.