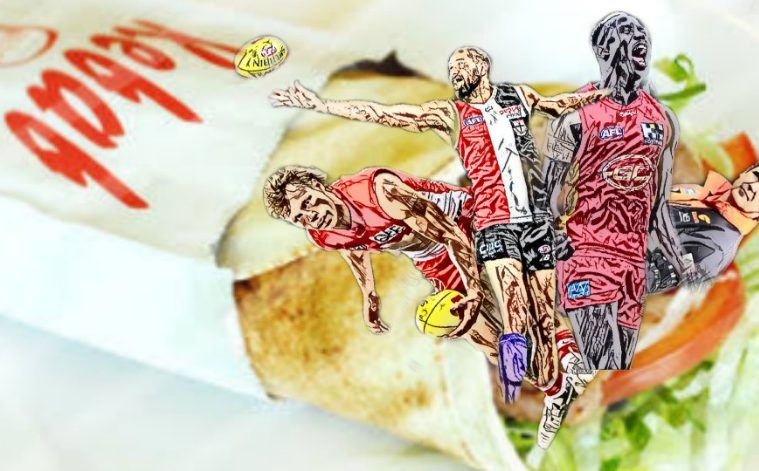 The Round Nine Breakfast Burrito

In a “better-late-than-never” edition, Josef Mack gives a final rundown of the Round Nine shenanigans of AFL action.

Why do I continue to listen to my mate who’s a Collingwood supporter?

He’s a really positive guy, unlike myself who is a perpetual grump. He loves what this team has been building toward this year, they’re a classic ‘danger team’ he says. Well, what’s more susceptible to danger than a Bulldogs team with an injury list longer than Pinocchio’s nose?

The Dogs ground out what was a horrible Friday night game, thanks in part to their barnstorming first quarter. Adam Treloar haunted his old side, racking up thirty-five touches, eight clearances and three goals.

Bevo’s side put in a clinical display, dominating Collingwood on both the inside and outside, reminding us of the form they are capable of. Converting their chances continued to be an issue, but in this case they were too dominant for it to matter.

As for the Pies, they continue their mixed performances this year. Teams that are structurally sound down back completely shut down their already weak forward line. This isn’t really an issue they can fix in the short term, they just have to hope one of their key-talls develops, or they bring in some recruits or draftees in the off-season.

They can however push teams that struggle in this defensive area. What’s that? They’re playing Freo in Perth this week?…

Being Australians, all of us are intimately familiar with experiencing a pesky little fleet of mosquitos that just won’t go away. You can get on top of them, but you have to be ruthless in making sure you light the coil and heap on the Aeroguard.

I just want to relax ok. I don’t want to have to get up every hour and choke on cat piss-scented spray.

I invoke this annoyance mainly because I’m a Geelong fan, and utterly despise the Hawks. But Mitchell’s team is a threat that you can’t take lightly. Sure, the Tigers may be better than them, but they have to be vigilant if they don’t want their afternoons to be ruined…or their Easter public holiday.

For long periods of this one, Richmond were well on top. They gave us a sniff of that rebounding game they are famous for, exploiting the seventy-four turnovers the Hawks handed to them.

But when they let that coil burn out, when they lowered the intensity just a smidgeon…the Hawkies pounced.

Even though Hawthorn are a young side, their forward line is actually pretty outstanding. Between Gunston, Lewis, Bruest, Moore and now Koschitzke; they are stacked with playmakers that are tough for any back six to handle.

Give them a bit of momentum and they’ll capitalise on it ruthlessly. They couldn’t pinch it and were outclassed by the Tigers in the end…but they made them earn it.

Rather than re-live this one, I thought I’d give Port and North fans some throwbacks to previous games that we’re actually good. Here are some of my favourites:

In footy, we put a lot of focus on the W column and the L column. You might think I’m about to deflect this loss just because I’m a Cats fan. Firstly, how dare you. And secondly…yeah, you’re right.

But my point is, after every close game we say “wow, that’s amazing, they beat a really good team, could they be in with a chance at the flag??” but simultaneously we also say “oh no, they lost a game they were expected to win, is this their season over??”

This stops us from sitting back and appreciating two really good teams, both playing really good footy.

The Saints put on a third-quarter blitz that steered them home in a tight affair. Both teams pinged the ball from end to end at marvel, flowing seamlessly through the corridor in an entertaining game.

I saw some media commentators suggesting there was a problem with Geelong’s spare behind the ball structure. The thing about structures though, is that they always give something away, and if your opponent is good enough to capitalise, so be it.

If your set up perfectly at a defensive fifty stoppage, and Chaddy Ryder monsters you in the ruck by lacing one perfectly down his runner’s throat, is this really a defensive error?

If Jade Gresham dances around three Cats, slows the play up, and sends a perfect kick into the middle of the ground switching the angle, is this really a structural issue?

It reminds me a bit of the saying basketball commentators use when a guy drills a shot with a hand in his face. Great defence, better offence.

…everyone except me of course.

I think the key thing that contributed to the Bombers’ poor performance, was how they were dreadful at absolutely everything.

In a game where their opponent had the majority of the ball, the Bombers managed to lay thirty tackles…thirty! Callum Mills laid thirteen by himself, and twenty-one other Swans were on the park.

If the Swans kicked a bit better, this would have somehow been even more of a mauling. My point is, Essendon are bad at footy.

A lot was made of Luke Parker mocking Dylan Shiel’s timidness around the contest. Caroline Wilson said that Parker was being ‘a bit of a bully’ and that he was ‘juvenile’ and ‘nasty’.

To be honest Caro, I don’t think that helped. It’s like if a kid was being teased at school and rather than standing up to them, his mum came over to tell them off and fight his battle for him. Probably makes him look weaker if anything. It might stop it now but as soon as she leaves, the bullies have learnt their lesson.

That lesson being: Pick on them more, they are shit at footy.

There wasn’t much to takeaway from this game. It was exactly the result you would’ve expected at the start of the year.

Adelaide looked plucky in the first half, piling on five goals straight at one point, and taking a slim lead into half-time. But it was all Brisbane from there, putting the Crows back in their place as an up and coming but still un-polished side.

The Lions were clinical in front of the sticks. Charlie Cameron kicked four against his former club, and Zac Bailey slotted three as he maintained his push for a blazer this year.

Despite their shaky ball use, the Crows are still pushing teams. A whopping seventy-six tackles will have pleased Matthew Nicks, but he would hope they can be a bit sharper against the Sainters this week.

I’ve always thought that rain gets a bad wrap. Not just from a footy point of view but also generally. Nobody likes the rain I’m told, ruins your ability to go do things. You can’t go outside because you’ll get wet.

But is getting rained on even that bad? You just get wet, and then when you go back inside you get dry. Not a big deal really.

I think rain might get a bad shake of the sauce bottle, because it’s associated with the cold…but when it’s raining and sunny?

Gold Coast dominated around the contest, racking up an absurd one hundred and seventy-four contested touches on a slippery Metricon deck. What their forward line lacks in the air is made up for at the fall of the ball, as the world’s tallest small forward Mabior Chol kicked himself four snags.

The typically flashy Dockers forward line struggled to compete with the Suns, not being able to win any contests up that end, despite racking up twenty-nine more inside fifties.

It’s hard to explain just how dominant the Suns defenders were on the ground. After kicking two goals in a less rainy first quarter and two garbage-time goals late, there was a whopping patch in the middle of the game where Freo managed thirty-five inside fifties for no goals, four behinds.

It’s not all doom and gloom for the Dockers yet, but the rain really exacerbated their weaknesses. Their forwards are all very handy in open space, but are comfortably out bodied by most defensive units in tight.

Their small forwards all have good pressure ratings, but expect to see teams starting to take on the tackle against them, rather than rushing the ball out quickly…the pressure could be a paper tiger.

The Suns are still young, but they are starting to put up more and more performances like this against the better sides in the comp. Wins against Carlton, Sydney and Freo; as well as good performances against Melbourne and St. Kilda, could have the coasters raising an eyebrow at the top eight.

They’re not there yet, but looking at the fixture, their maiden finals campaign could be on the cards.

I talk about stats and playbooks and structures a lot; but deep down, I’m a footy romantic.

Effort and passion and love and intensity. These are the true things that separate teams who play well and teams like the Essendon Bombers.

As soon as the Leon Cameron news broke, I switched my tip to the Giants. I knew that Carlton were a better football team, but blokes have a habit of rocking up and really putting all their blood, sweat and tears into a rousing final performance for their coach.

They might not win in the end, but expect an intense start, maybe a waning as the game goes on, but a big push at the end if the game is close…

…What’s that you say?…a thirty-three to six start?…five goals to one in the last quarter?

Well, I guess that goes to show, the Giants have no soul. Either that or they all hate the coach.

Maybe that’s why they sacked him (allegedly).

Voss’s men, on the other hand, rocked up and ruined the party.

It’s a very bizarre Blues team to watch considering what we’ve seen in past years. They actually play quite consistently. Turns out, if you just try, you’re actually more likely to win the game.

Despite losing Mackay, the Blues’ forward line still looked very efficient inside fifty. What’s even more promising for the Blues, is that Patrick Cripps handed us his worst game of the year, racking up an abysmal twenty-six touches and seven clearances.

Cripps that is pathetic mate. If you keep this sort of shit up, you’ll only manage to win the Brownlow by ten votes.

After the first quarter, this game looked like it’d be worth watching. Two hundred pointers don’t come along that often, and they’re always a spectacle when they occur.

These days, unfortunately, teams are more concerned with taking the win and moving on. Once you’re up by fifty, just put a number behind the ball and don’t take any risks.

I thought there was a slim chance Goodwin might just let the boys give them a good old fashioned flogging. But apparently, he had to be all, ‘professional’ and ‘think about the long term context of the season’.

Seriously Simon, piss off mate. If I wanted to see someone get strangled I would’ve watched the UFC.