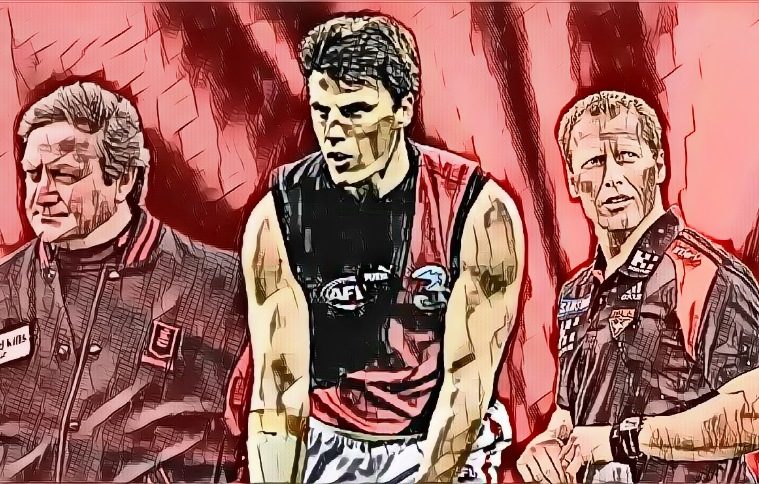 What Could Have Been… Matthew Lloyd And 1000 Goals

At 31 years of age, and with 926 goals to his name, the end came a little too suddenly for Matthew Lloyd. And a year or two too soon.

With a career average of 3.43 goals per game, and coming off a season where he had dipped to “just” 2.95 goals per game, things had changed quickly at Essendon. Kevin Sheedy was now just a memory at Bomberland, and a new coach with high hopes had taken the reins.

Little did Lloyd know, but the departure of Sheedy from Essendon sounded the death knell in the pursuit of the legendary 1000-goal mark. Whilst Sheedy was content playing Lloyd in the position he was best suited to, building a forward line around his champion goal kicker, Matthew Knights was looking for something different. The new coach wanted change, and retaining Lloyd at full-forward as the number one option inside 50 did not seem to be on his radar. Instead, Knights wanted to use Jay Neagle out of the goal square, pushing Lloyd up to a half-forward flank to work up to the wings.

It was a move that effectively ended Lloyd’s pursuit of the 1000-goal milestone, the 300-game milestone, and his career with the Bombers. Lloyd retired at the conclusion of the 2009 season, taking with him a four-game suspension (down from the initial six).

A frustrated man in his final days as a player, and playing with injury as he struggled to remain motivated, one of his final acts in football saw Hawk, Brad Sewell rendered unconscious on the MCG turf, courtesy of a crude bump from the Bomber champ.

It was a less-than-ideal way to go out.

Lloyd would be labelled as a sniper, a coward, and any other name Hawthorn supporters (and players) could conjure, but his departure from the game, and his last two seasons at Essendon reeked of two things – a coach desperate to implement his own system and emerge from the shadows of the man who came before him, and the resultant fall from grace of one of the best pure forwards of the modern era.

As we celebrate Lance Franklin becoming the sixth man to register 1000 V/AFL goals, Matthew Lloyd may be feeling just a pang of regret. That could have been him. Probably should have been.

His could have been an exit covered in glory, joining the greatest forwards of all time in one of the rarest clubs in footy. Instead, Lloyd found himself under fire on his way out the door. He was heavily criticised for the hit on Sewell, and headed into retirement, despite having plenty left to offer, 74 goals short of the magical 1000-goal mark, and 30 games short of 300.

Looking back on the final couple of seasons for Lloyd, was the appointment of Knights and the departure of Sheedy the series of events that cut his time with the Bombers short? Or had Lloyd reached the point that he was no longer the player he once was, and Knights was just the first to realise it?

In his 2011 autobiography, Straight Shooter, Lloyd details the impact of the coach losing faith in him, or perhaps having very little of it, to begin with. He also highlights the lack of trust within the playing group – from the leadership group, of which he was part, down to the younger players – that permeated the club. Whilst he remains respectful of what Knights was attempting to do, he is critical of the method, particularly when it comes to the way the new coach handled losses. Knights’ legendary predecessor liked to keep things at the club somewhat balanced, taking the good with the bad on any given week, whilst maintaining a feeling that all was fine within the walls of Windy Hill.

Knights was vastly different, his mood, and that of the club as a result, often mirroring the scoreboard result for the ensuing week.

Whilst not pining for Sheedy, you don’t have to read too much between the lines to realise that Lloyd did not enjoy his time playing under Knights at the club, and with the benefit of hindsight, Bomber fans would have to wonder whether the second prospective coach in line may have been a better choice when it came to replacing Sheedy?

Former Essendon premiership player, Damien Hardwick was also in the running for the position after the Sheedy era came to a close. However, what was described as a “poor presentation” delivered by the now-three time premiership coach worked against him when it came to making a decision. It was rumoured that Hawthorn – then pairing Hardwick with Alastair Clarkson as an apprentice/master combination, scuttled some of the contents of the presentation, uncomfortable with some of the tactical content Hardwick was planning to share with the enemy. After these aspects were removed, it left Hardwick with a watered-down version of his work to present to those in charge at Windy Hill. Hardwick was also of the opinion the playing list needed a cleanout – Knights thought it had potential and the Bombers hierarchy were swayed by his enthusiasm and vision.

In short, they were told what they wanted to hear and they bought it. Hardwick offered reality and was upfront about it. Knights sold them hope.

Would the Bombers have been more patient with Hardwick at the helm? Knights lasted three seasons, let go by the club after they crashed to 14th place in 2010. The James Hird era commenced following that.

It was a couple of years too late for Lloyd, who was told in no uncertain terms in a preseason hit out at one stage that he was “standing on Jay Neagle’s bootlaces” in preventing the young forward from having a decent run at the footy inside 50. That was followed with the instruction from Knights that Lloyd was not to even enter the forward fifty at all. Ahhhhh, so that’s why Jay Neagle never really went onto do much of anything? It was Lloyd’s fault! Not the fact Neagle was never completely fit, or that his lack of aerobic ability meant he couldn’t play anywhere else but inside fifty, but because the bloke with 900 goals was getting in his way.

Lloyd’s decision to retire, despite a one-year deal on the table, came following a meeting with Knights where the coach stated he was looking at playing a combination of Jason Laycock, David Hille, Scott Gumbleton, Michael Hurley and Jay Neagle as part of the forward line in 2010.

Want to know how that went? Let’s explore.

Essendon’s top goalscorer in 2010 was Angus Monfries, who finished with 24 goals. The best of the players Knights named as forward options was the injury-plagued Gumbleton, who finished the season with 19 goals to his name. Combined, those players listed above had 58 goals for the year. If we jump back just two seasons, to 2008, Lloyd had 62 by himself.

It was a hit in hope by Knights as he desperately attempted to conjure something the resembled a working forward line in the wake of Lloyd’s departure, and it left many Bomber fans wondering how they’d managed to turn the man that was a powerhouse full forward into just a memory at the club?

Had Lloyd played on for two more years, of which he certainly appeared capable to me, how close would he have been to the 1000-goal mark?

Taking into account the potential for missed games, we’ll say he plays 15 in each of 2010 and 2011 (his career average was 18 games per year, even taking into account his first couple of seasons). That takes him to the 300 game mark, which the Bombers would have certainly honoured had he got somewhere in the vicinity of that number. Hell, if Marc Murphy gets a 300th game at Carlton, Lloyd definitely gets one at Essendon.

We should also take into account a potential dip in his goals per game as he gets a little less likely to kick big bags – let’s say that 2.50 per game is about what could be expected (the poor – by his standards – 2009 season saw him average 2.95). That’s another 75 goals, and just ticks him over the 1000-goal mark.

Of course, there are a number of factors that may have prevented Lloyd from achieving the mark, and Lloyd’s decision to walk away after 2009 is something that he made his peace with. However, the refusal of Matthew Knights to play Lloyd in the position he was most suited will forever remain the catalyst for one of the biggest “what ifs…” in the history of the game. How do two more years at Essendon change the way Lloyd is viewed? Does it change it at all?

Lance Franklin marched into footy immortality in 2022, notching his 1000th goal. But he should be the seventh man to do it – not the sixth.

Had things gone a little bit differently, Matthew Lloyd could have been there as well.