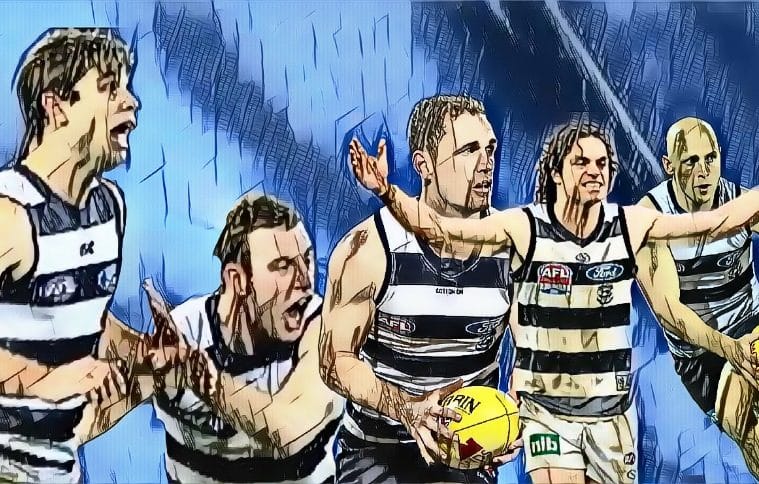 The Biggest Hurdle: Ranking Every Geelong Prelim Since 2007

This article originally began as a joke in our Mongrel Group Chat. Even before Geelong had their obligatory first week of finals loss, I’d said I would rank the Cats’ Prelim Final losses since 2013 from most to least heartbreaking. After all, what good is supporting a club if you can’t poke fun at them, right? If you don’t laugh about the persistent failures to clear the final hurdle, you’ll cry, but I digress.

The plan for this article had been on the back burner over the course of the last ten days, after the loss to Port Adelaide convinced me that my footy club were going out in straight sets for the second time in seven seasons. Obviously that didn’t come to pass, however, and in last night’s win the extraordinary fact that Joel Selwood will play his tenth Prelim of his career, somehow the most ever despite Michael Tuck playing in 11 Grand Finals; figure that one out.

So this article will be a little different from the original plan; instead, it will be a brief exploration of each of the nine Prelims Selwood has played leading up to next Saturday night, ranked from 1 (a sadness only equalled by the end of Infinity War) to 9 (a joy equalled only by that bit in Endgame with the portals). Anyway, enough of me outing myself as a complete nerd; here’s my ranking of Geelong’s last nine Prelim Finals, beginning from the bottom:

As I sit here, racking my brain for any memories of a game I know I was at, I truly think I’ve repressed the memory. It’s not a game I’ve ever really watched highlights of. Of course, I’ve seen Burgoyne’s goal on loop, but I’ve never gone back and watched Travis Varcoe’s miscued snap that broke the hearts of Geelong fans everywhere. After so many years of such thrilling battles that, to me at least, represented the very pinnacle of football, the Kennett Curse was over. Hawthorn, obviously, went on to win the Grand Final the next week in the first of their three-peat, but Geelong supporters feel that one was there for the taking.

If 2013 was the one that got away, 2019 was the one that got away and came back so often you basically just gave it a key to the house and told it to decide. That analogy holds up to absolutely no scrutiny, don’t think about it too much. In any event, the first half of 2019 was the kind of footy every Cats fan had been wanting to see for almost a decade; exciting, tough, ruthless. Then the bye came, and with it came a loosening of the wheels which resulted in a 13 game streak of a loss followed by a win and so on. They were Schrodinger’s Cats; somehow simultaneously world-beaters and uncompetitive in the same moment. All paths pointed to the Tigers, who Geelong had beaten by 67 points in their round 12 encounter but who hadovercome early season struggles to be the best team of the second half.

The game itself has been written about enough; I don’t feel it necessary to mention much more about it. Geelong turned an early 14 point deficit into a 21 point half time lead, with Richmond on the ropes, before they turned it around after the break, running out 19 point winners. Ultimately, very symbolic of the season that was. Tim Kelly was incredible in his last game in the Hoops, with three goals from 30 touches, while Tom Lynch was the difference, kicking five goals in one of his best ever outings.

This one really did sting. 2016 had the vibe of a special year for the Cats; after missing finals for the first time since 2006 in the previous season, the acquisition of Patrick Dangerfield, among others, had all the makings of a fairy tale. Danger lived up to the hype, mostly, putting together one of the best individual seasons in recent memory, and when Isaac Smith’s set shot went awry in the Qualifying Final against Hawthorn, it seemed symbolic of a curse ending at the Cattery.

Smith’s shot was symbolic, but not in that way. Instead to my mind it reflects the fact that Geelong have undoubtedly struggled in the first week of finals and their only win since 2011 came off the back of a player from another team failing, and not a Cat succeeding. In the Prelim, the Cats were shown up brutally; the Swans put 32 points on the board unanswered, and took a 39 point lead into the first break. From that point, it was all catch up. I maintain the Cats would have won the flag the next week, with their contemporary record against the Dogs still excellent. It was a sad way to farewell Corey Enright and Jimmy Bartel, who probably deserved better to be quite honest.

In many ways, this game was the end of an era. After three Grand Finals in a row, the hunger seemed to have been sapped out of a Geelong outfit who had also clearly been distracted by the ongoing Ablett/Gold Coast story. Collingwood, on the other hand, felt they had unfinished business having failed against the Cats in two out of the last three Prelims, and they fired on every cylinder. No team came out and brutalised the Cats of that era the way Collingwood did on that day.

The Pies booted 13 goals to 3 in the first half of the game, effectively ending it before it even began in a similar vein to last night. It could have been a lot greater than a 41 point margin, too, if the Pies didn’t take their foot off the pedal in the last quarter. Gary Ablett had 40 touches in what looked likely to be his last game in the Hoops, and Mark Thompson left the club too in a game which had all the narrative of an ending, and the only reason it isn’t lower down is because of what immediately followed.

Somehow this game just doesn’t have the rawness that other losses have had. It was, by no means, fun to watch. Taylor Walker’s power standing Crows looked on from the very first bounce, or maybe even before it, and the Cats just couldn’t get the ball going their way. Adelaide piled on six goals to one in the opening term, and effectively had the game iced at the first break.

I really couldn’t tell you why this game doesn’t stick in my memory like a thorn the way some of the preceding finals do. Maybe it was the narrative that was Richmond’s first flag in generations, maybe it was bottled in the first week of finals and the Prelim was just the humane snap of the neck. In any event, this was another Prelim where Geelong were beaten in the first quarter, with very few noteworthy performances.

This is another game that honestly has kind of been forgotten. It’s easy, for example, to forget that this was a Dogs’ side which made three Prelims in a row, and came very close to Grand Final berths a couple of times. It’s also easy to forget that, to this point in the season, Geelong had just lost the one game, and looked to be putting together a season paralleled only by Essendon in 2000. It simply wasn’t to be, obviously.

In any event, I have very few memories of this game. It seemed such a foregone conclusion that maybe it just hasn’t stuck in my mind at all. On reflection, maybe this game should have served as a warning sign for what was to come the week following. The Dogs kicked four of the first six goals and got the jump, but from there the Cats seemed to have the game mostly in hand.

These kinds of reflective activities are by their very nature never exact; they are always influenced by what follows. It should be, then, no surprise that the three Prelims which led to three Premierships lay at the top of the tree here. Asking me to rank these games is like asking me to pick my favourite child – I don’t have children, so it’s not exactly easy to do (You’re welcome for another woeful attempt at “humour”). Personally I think Geelong’s 2011 season is underrated now; maybe I’m just as much to blame given I have this game lowest down.

It was, just for a change, a good start for the Cats that got them over the line in this one. Geelong kicked five of the first six goals and never looked back from that point, really. West Coast’s improbable rebound from a wooden spoon ended in a Prelim, and Geelong marched on to take on the Pies the next week, led by James Kelly and Joel Selwood. It wasn’t without a scare, with Steve Johnson going down with a knee injury before recovering to kick four goals the next week. This was the last Prelim win Geelong have had, but an emphatic one nonetheless.

What a game this was. Records of the subsequent week should be forgotten, and this game treated as the ultimate Grand Final of 2007. After their 106 point win in the Qualifying Final, the Cats seemed surely favourites to end a 12 year Grand Final drought and, perhaps, a much longer, much more significant drought. Standing in their way, the villains of the competition, aiming to send off their 35 year old talisman Nathan Buckley with the Premiership Medal he deserved.

This was a game that made legends of a number of players, but none moreso, arguably, than Gary Ablett. Dennis Cometti had a lot of iconic calls in an iconic career, but to me none are greater than ‘cometh the moment, cometh the man, the son of the man’. Ablett’s indelible mark on the football world wasn’t made solely in this moment, but this was the kickstarter. Brad Ottens’ ruck work and physical presence gave him the ‘Mr September’ moniker, and Stevie J put a rollercoaster season behind him to kick three goals, bested by four in a Grand Final the following week. There was no fairytale for Bucks; just another September heartbreak.

At age 10, brought up in a family of Geelong apathists, the 2007 season, while no doubt important, doesn’t have the same meaning to me as 2009. From memory, this Prelim was the first final I ever attended, dragging my dad along just as I would two years later. I remember it being an absolute belting, and it was, although in hindsight the game was very much still alive at half time, the Cats leading by a slender 11 point margin.

It was a night that has solidified heroes in my mind; Chappy’s 26 touch, five goal performance earned him the privilege of his number on the back of my jumper, just in time for the Grand Final where he would win a Norm Smith Medal. Gary Ablett, days before his first Brownlow win, was incredible; Jimmy Bartel a contested beast. And Joel Selwood, in just his third season, had a lazy 29 touches. It’s a game that meant a lot at the time and means a lot now; there truly is something incredibly sentimental about footy, and the memories made along the way. It’s impossible not to be frustrated at Geelong for the years of wasted chances since the last flag, but equally it’s hard not to get tied up in the recollections of a truly great team, who played truly great footy.

Anyway, I think that’s where I’ll leave… whatever this was. Do I expect Geelong to win their Prelim on Saturday and go through to their first Grand Final in 10 years? No, and much though it would hurt I’d love to see Chris Fagan’s Lions get up in a hypothetical Grand Final match up. But that doesn’t mean I won’t be in my lounge room, cheering my boys home.