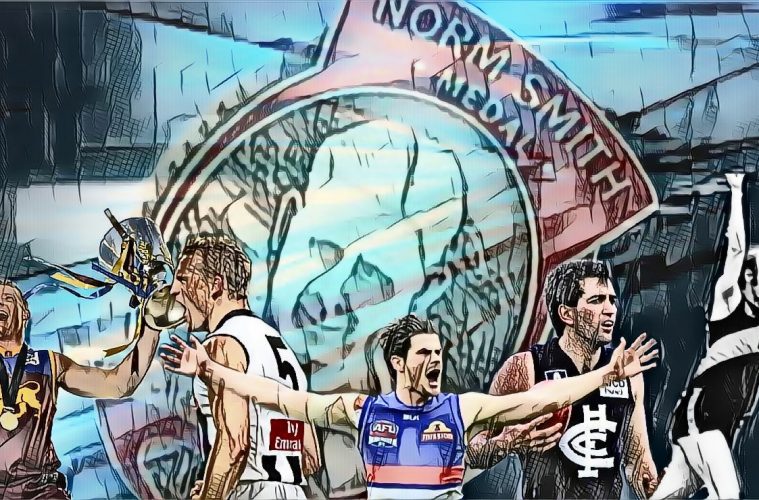 This week at The Mongrel, we are drilling down on one of the most important and sought-after awards in the game – The Norm Smith Medal.

The AFL Grand Final is the stage where boys transform into men, and men morph into club legends. But is it always as cut and dry as one player who is the undisputed best on the day? From the outside looking in, there are those who were incredibly stiff to miss out on the accolade, and they are the ones we’ll be looking at in this two-part article.

Here are the Almost-Norm Smith winners, and the stories of their games.

Re-watching the 1980 Grand Final, it’s hard not to get caught up in the celebratory atmosphere as Kevin Bartlett gathers, turns, leaves Stan Magro in his wake and slots goal number seven on the run. The sight of KB streaming back, with his arms in the air, celebrating his wonderful effort is iconic – it is the KB pose immortalised in his statue outside the MCG, where Bartlett made his name.

But there were others that made their name in the 1980 Grand Final, and some believe they would have been more than worthy recipients of the Norm Smith Medal as well.

Mark Lee was viewed by many as a lesser ruckman to the Brownlow Medallist, Peter Moore. However, in this contest, Lee hustled and bustled his way to a win in the ruck convincingly, and stamp his authority on the contest.

Geoff Raines had a point to prove in 1980. After being snubbed in the Brownlow Medal (check out our story on it here – The Raines Conspiracy), Raines hit the MCG with purpose, and proceeded to rack up 36 touches (his second highest total of the season) as he floated around the ground picking up disposals at will.

The Melbourne morning paper, The Sun awarded votes very differently to the Norm Smith panel of judges, with Bartlett coming in third place.

The Sun voting went as follows.

Those who watched the game – who would you have given your three votes to?

The AFL has rid itself of the “countback” system for the Brownlow Medal, but in terms of the Norm Smith, its reluctance to do so has cost Jason Gram one of the highest accolades in the game.

2009 was a classic Grand Final, highlighted by the “toe-poke” to secure the Cats the flag, and a pair of brilliant games from Gram and Paul Chapman.

Both these blokes finished with nine votes of a possible 15. The panel of judges consisted of John Worsfold, Gerard Healy, Nathan Buckley, Gerard Whateley and Jason Dunstall.

Dunstall, Worlsfold and Buckley all gave Chapman best on ground honours, however Whateley and Healy didn’t give him a vote at all.

In contrast, only Healy saw Gram as the best player on the park, with Worsfold and Dunstall awarding him two votes, and Buckley and Whateley awarding him one.

Gram featured in the votes from all panellists, but as Chapman received more three-votes from the judges, he was awarded the medal on a countback.

The AFL should do the right thing and retrospectively award Gram a medal. He deserves it.

Both Carey and Quayle got it right, awarding Boyd the three votes. He was the game changer – the man who stamped his authority on the contest in a withering blast to ensure the Dogs would be premiers. His six contested grabs were pivotal. His three goals were vital. And his ability to switch from the ruck to forward was something the Swans could not contend with.

Johannisen’s 33 touches are nothing to sneeze at. He got a heap of uncontested footy and made the Swans pay for their lack of attentiveness – in the ensuing years, it would be revealed quite starkly that JJ struggled when some defensive attention was placed on him. It was a lesson learnt too late for the Swans.

I suppose it is obvious where my preference is here. I sit with Carey and Quayle – Boyd’s influence on proceedings was undeniable, and I find myself asking the question; if the Dogs did not have Tom Boyd that day, could they have won?

And I come to the same conclusion every time – no, they couldn’t. But I am not sure about Johannisen. They may have fallen over had he not been the drive from half back that propelled them forward, but I am not as convinced.

And anyway, there was another player sandwiched between them in the voting – Sydney’s Josh Kennedy.

Voss and Johnson gave JJ the three votes, yet the media member involved opted for Kennedy as the best on the park and didn’t have Boyd in the votes at all. Jay Clark… what the hell?

The first man to ever win the award on a losing side, Rioli was eye-catching and brilliant, but was he the best player in the game as the Blues ran out three-goal winners?

Playing in the guts, Rioli kicked three goals running forward and was a thorn in the side of the Blues all afternoon, but the game of Wayne Johnston was pretty bloody spectacular in its own right, and as part of the winning team, would have been in strong contention for the award.

The panellists for the Norm Smith this season were Jack Hamilton, Allen Aylett, Mike Sheahan, Doug Bigelow (Deuce’s brother?) and Peter Landy. Sadly, their votes are not available, but thumbing through old papers reveals that The Sporting Globe was unable to split Rioli and The Dominator.

The six judges from that paper had both players locked on 13 votes apiece, of a possible 18.

Three had Rioli as the best on ground, two had Johnston, and whilst no one is questioning Rioli’s claims on the award, those looking for a reason as to why he was awarded it on the losing team may find their answer in accuracy. Or inaccuracy.

Rioli kicked 3.1 for the game, whilst Johnston, despite having more of the footy (23 touches) and more pings at goal, was only able to convert twice, finishing with 2.4 for the game.

Is it possible that the esteemed judges on the day saw Johnston’s inaccuracy as something that could have potentially cost the Blues? Was he one straight kick away from being named a Norm Smith Medallist and having an award to go along with the title of being a big-game player, bestowed upon him by the Carlton faithful?

One more straight kick, and I reckon The Dominator gets the nod.

I often wonder how the perception of a player would change with the switch of one award, and the way Gary Ayres is remembered at Hawthorn is as a “good driver in heavy traffic.”

It was a phrase coined by the late Allan Jeans, as he would often throw Ayres into the middle when the going got tough, and Ayres had the habit of taking control of things in the guts when the Hawks needed it in big games.

In 1986, Ayres lined up on the wing, opposed to Carlton match-winner, and future Norm Smith Medallist, David Rhys-Jones. He had 23 touches and a goal as the Hawks powered to a 42-point win.

But what of Rodney Eade?

Younger fans would be more familiar with Eade in his role as coach at Sydney, the Western Bulldogs and Gold Coast, and more recently from audio of the man known as ‘Rocket’ giving his players a serve in the coaching box, but Eade played a blinder against the Blues, and would have been just as deserving of the medal.

Eade was opposed to Carlton’s prime mover, Craig Bradley, and whilst Eade would go on to rack up 26 touches; the most of anyone on the park, Bradley had his lowest disposal count of the season – just eight touches.

So, how does the football world look at Rodney Eade had he claimed the 1986 Norm Smith Medal? With it comes a degree of respect that simply cannot be earned any other way. If Ayres was the good driver in heavy traffic, was Rodney Eade the sports car driver matching the sleek Carlton model for speed, but having a bit more grunt under the hood on the day?

The judges for this Norm Smith were Peter Simunovich, Ted Whitten and Lou Richards. However, the votes in The Age at the time told a very different story.

Of the nine people giving votes in the paper, six gave maximum votes to Eade, whilst only one gave the nod to Ayres.

Whilst I am a huge Gary Ayres fan, Rocket could justifiably feel as though this was an accolade that slipped through his fingers.

I suppose this comes down to whether you think the best performer on the winning team should trump the player that kept the losing team in the game.

Buckley was excellent in compiling 32 disposals for the contest, but Voss’ 26 touches and six tackles were equally as good.

Outspoken star, Jason Akermanis, left no doubt as to his thoughts on the day after the game.

“That’s what happens when you have judges that are biased,” said Akermanis to the crowd of Lions supporters at the Gabba as part of the Brisbane premiership celebrations.

The judges in question were Robert Walls, Geoff Slattery, Dwayne Russell, Mark Duffield and Patrick Smith, but there is some confusion around the votes awarded by the Herald Sun the following morning.

Dan Eddy’s excellent book detailing all the Norm Smith Medallists up to 2017 states that the Herald Sun panel awarded their best on ground to Buckley ahead of Voss, again by just one vote, however me… being the diligent fella I am, added things up myself, and it appears as though Dan may have got his maths a little wrong, with the order actually being reversed.

The tie-breaker in the Herald Sun was the minor votes, which eventually added up to Voss with 18 and Buckley with 17.

So, who do you think were the players most worthy of these Norm Smith Medals? Did the judges get it right? Did they get it wrong? Who would you have had wearing perhaps the most coveted medal in our game? Part Two coming soon.

If you like this stuff and want more, I am producing several members-only articles per week currently. Please consider joining to help support our site. Click the pic below.