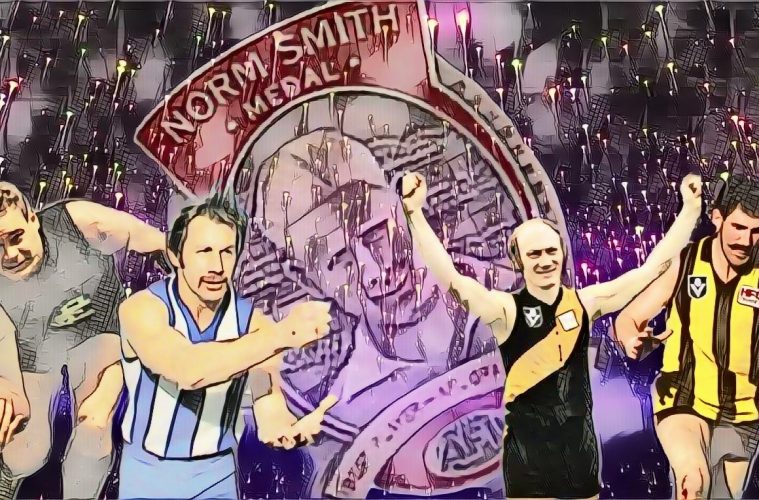 Before The Norm Smith – Best On Ground prior to 1979

As Dustin Martin stood on the podium receiving his second Norm Smith Medal just a year or so ago, those not caught up in the delirium of the second Tiger premiership in three seasons had to spare a feeling or two for Bachar Houli. The Norm Smith Medal is one of the highest achievements in the AFL, alongside the Brownlow and the Players’ Association MVP award. To have an accolade like that bestowed upon you is an honour few receive. To be so close must be, in hindsight, agonising.

And Bachar had run second to Dusty. Again.

To some, it may not have mattered too much – the premiership was the important thing, right? Dusty had a wonderful finals series. What was one more award, anyway? Footy is a team game, after all. But it did matter. The Norm Smith Medal matters greatly.

Ayres, described by Allan Jeans as a “good driver in heavy traffic” was integral to the Hawks dominance of the 1980s. McLeod was like a Rolls Royce, shifting gears from defence into the middle for the Crows as they notched back-to-back flags in 97-98, and Hodge cemented his stature as the general of the Hawthorn Football Club with commanding defensive performances in 2008 and again in 2014.

These men have undoubtedly proven that they perform on the biggest stage of all – Grand Final day. They have the medals to prove it. It mattered to them, just as it matters to every player on that field in every grand final. It’s a tremendous honour – being crowned the best of the best.

Forty-two medals bearing the name of Norm Smith have been handed out since the award was introduced, but only the four times has a player been good enough to win it twice. It’s an outstanding achievement to climb the mountain once; to be named the best player on the best team (with a few notable exceptions). Winning it twice leaves no room for doubt as to just how good you were when the heat was on.

Wayne Harmes was the inaugural winner in 1979 for Carlton, and names such as Hird, Buckley, Rioli x 2 and Judd have all earned the right to stand on the dais and have the medal placed around their neck. However, prior to 1979, there were a host of players whose efforts have never been officially recognised. These are players whose skill, courage and ability to perform on the biggest day of the football year were proven, but they’re also players who have not had their accomplishments lauded, as Dusty, Hodge, McLeod or Ayres have. Their exploits, however great, have not been celebrated even remotely like those in the modern era.

Perhaps foremost amongst these players is Brent Crosswell.

‘Tiger’ as he was known, could hold the unique distinction of being judged best on field in two grand finals, for two different teams. The first effort came for Carlton in 1970. Crosswell was named the Blues’ best in their win over the Magpies in a game famous for the Jesaulenko “you beauty” mark. Crosswell collected 17 kicks and six handballs, and was one of few Carlton players able to stem the tide as the Magpies established a seemingly insurmountable 44-point lead.

He transferred to North Melbourne in 1975, just in time to help usher in the club’s first premiership. Crosswell was named best for the Kangaroos with 24 disposals (22 kicks) and a goal. He was often described as an “incredible big-game player”, and his ability was only matched by his volatile temper. Crosswell’s on-field exploits would be fondly remembered by both older Carlton and North Melbourne fans, but his reputation within the football world would be enhanced with two Norm Smith medals to his name.

Kevin Bartlett proudly accepted his Norm Smith medal in 1980 as the Tigers ran over Collingwood. Whether Mark Lee or Geoff Raines had claims on that medal is a matter for debate, but ‘Hungry’ finished with seven goals and put on one of the best goal-kicking displays ever to that point. The vision of him streaming past Michael Roach to receive the handball and run into the open goal was burned into the memory of every Tiger supporter who saw it, as was the memory of him leaving Stan Magro in his wake on the boundary as he turned towards goal and slotted his seventh goal. But seven years earlier, Bartlett had another stellar outing.

Richmond knocked over Carlton by five goals in the 1973 Grand Final as Bartlett racked up 26 disposals – all kicks unsurprisingly, and kicked a goal. A retrospective medal for his ’73 outing would only enhance the legend of KB, and it would befit the reputation of Bartlett, given that it occurred in a game where he did not see the need to handball even once.

The accolades Ron Barassi received during his career are many, but due to the era he played, a Norm Smith Medal is something he could never obtain. That Norm Smith was actually coaching him at the time kind of prevented that.

Barassi was named best on ground in both the 1957 and 1959 Grand Finals, kicking five in ’57 and adding another four in ’59. Naming him as a retrospective dual Norm Smith Medallist is probably something Barassi doesn’t want or need at this stage in his life. His career is etched in stone as one of the greatest of all time, but if you ask a modern fan of Barrassi’s achievements, they may struggle to tell you. He was a master coach, and many remember him as such, but Barassi, the player, was equally as good. Two Norm Smith Medals would be all that you need to know about him as a player.

Just ask Robert Dipierdomenico if there should be retrospective Norm Smith Medals, and he’ll tell you all about it. Missing the cut by just one year, Dipper will tell you he was the best afield as the Hawks got over the Kangaroos by 18 points. He had 21 touches and won plenty of hard ball, but Leigh Matthews (28 touches and four goals) may be a victim of his own high standards when people talk about his impact on that game.

Despite the greatness of those mentioned above, one man could even top all of them when it came to big-game performances. You’ll be forgiven if his name doesn’t automatically ring a bell.

Percy Beames of the Melbourne Football Club was in contention for three consecutive best on ground awards in Grand Finals from 1939-41. His six-goal haul in ’41, playing as a rover left no doubt as to his prowess. MCC members would be well aware of the Percy Beames Bar at the Melbourne Cricket Ground, and those who follow amazing individual sporting achievements may be aware that Beames is the only sportsman to ever play 200 VFL games and 200 cricket matches for Melbourne and Victoria.

Beames went on to become the chief football and cricket writer with The Age. He sits in the forward pocket in Melbourne’s Team of the Century, which is an amazing set of accolades. Adding “triple Norm Smith medallist” to the CV is something no one else could lay claim to.

There are many others whose careers would be greatly enhanced with a retrospective medal. Robert Dipierdomenico was arguably best on ground in 1978 although many swear it was Leigh Matthews. Arnold Briedis’ five goals and 28 touches were good enough to earn best on ground for the Kangaroos in the 77 Grand Final Replay. Mongrel Punt favourite, Don Scott (71), Robert Walls (72) and the great Kevin Sheedy (74) could all stake a claim to be recognised as retrospective Norm Smith medallists as well.

The Norm Smith medal enhances a player’s reputation. It is a source of pride; recognition that when it was all on the line, the player awarded the medal was the one to stand up and make a difference. The AFL has footage of grand finals dating back many years before the inaugural award. There are newspaper reports detailing the games dating back before that, too; a compilation of reports detailing the best player on the ground is not too far removed from the voting system currently employed.

The players who came before the award was instituted deserve the honour just as much as the modern-day heroes. Sadly, for some of those great players, their time with us has ended. That’s all the more reason to ensure their legacy is preserved.

They may not have won the medal on the day, but their exploits deserve to be remembered.

In Ken Piesse’s book, The Greatest Game, he compiled a list of players judged best, both as voted by media outlets, and from his own assessment.

Here are those from 1960 onwards

Any thoughts on his choices are more than welcome.