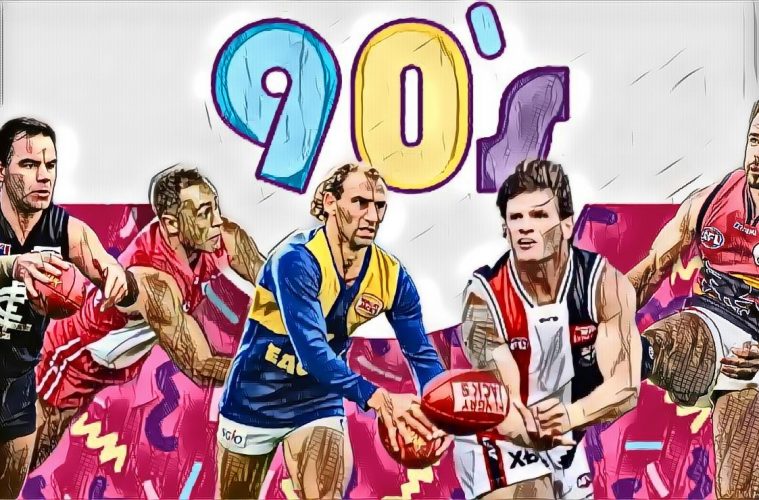 Well, this turned out to be a lot more work than I thought it’d be. I seem to make that mistake quite often when I start these sorts of lists. It all seems simple until I get into the nitty-gritty and then it becomes apparent how much effort it’s going to take.

The Top 15 defenders of the 90s took quite a while to get right, and this one took even longer – the number of great midfielders that graced AFL fields in the 90s was huge, and the amount that did it at a high level for the entire period meant that I had to be meticulous with applying a formula that was equitable.

Before I get into the countdown, I should give a bit of a rundown on the differences between the rankings this time around and the defenders’ top 15 I put together last week.

For the mids, I had to reduce the value placed on Brownlow votes. As an example, the top defender amassed 78 Brownlow votes in total for the decade. In regard to mids, there were eight players that topped that mark – some of them quite easily. There was also the fact that mids were much more inclined to rack up Best and Fairest awards AND All-Australian selections – throwing them on a half back or half-forward line is something that continued for many seasons but was prevalent in the 90s.

As such, I had to reduce the value I placed on some categories for mids in order to give a commensurate score with the backs. If I am going to compile the best 20 of the 90s after this is all over, I have to have a relatively level playing field.

And so, a reduction was made. I’m not sure it’ll have a huge overall impact on the final overall standings, but it gives the defenders a chance.

Whilst he did claim three of his ridiculous seven Charlie Sutton Medals in the 90s, only one of his five All-Australian selections came before we all started panicking about the Y2K bug.

West became the heartbeat of the Bulldogs midfield in the late 90s, often receiving attention from opposition stoppers, yet producing big numbers all the same. He would go on to have two runner-up finishes in the Brownlow – one to Woewodin… ugh, but was also third in 1999 as Shane Crawford claimed his medal.

We’ll be seeing a bit more of Mr West as we progress to cover the 2000s, but the fact he can slot into the top 20 here as well, despite missing three years at the start of the decade is indicative of the influence he had at the Kennel.

I feel a bit bad having Knights ranked one spot below the next guy, given their history, but numbers are numbers, and numbers don’t lie.

Knights is in here due to sustained form over ten seasons, as he and Craig Lambert put the Tiger midfield on their backs for the first part of the decade. He picked up two Tiger Best and Fairest awards in the first three years of the 90s before notching a well-deserved All-Australian selection in 1998.

Often seen as the key to the Tiger midfield, Knights was targeted by taggers, and in a famous incident had his head split open by Tony Liberatore as part of a spiteful game between the Tigers and Dogs.

As testament to his consistency, Knights finished in the top four of the Tigers’ B&F an amazing seven times over his career and was right in the mix at the pointy end of the ’95 Brownlow. Knights had 13+ votes in the Brownlow four times during the 90s as his play always seemed to catch the eye of the umpires.