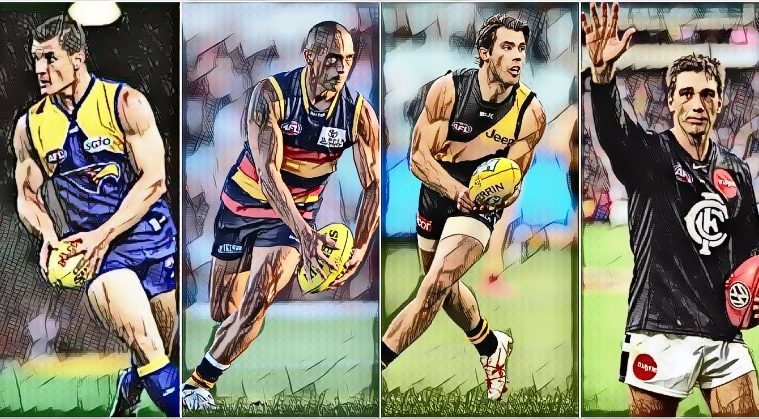 The Team Of The AFL Era – Defenders Squad

This is an ambitious exercise, but it’s the off-season, and it’s not like I don’t have the time to do it, right?

I mean, I have a family, a job, a business, a couch… all require my attention, but the team of the AFL era… it calls to me like a siren’s song.

Let’s hope the results don’t see me crash into the rocks and sink, never to be seen again, although I’m sure some would celebrate.

So, rather than just dole out 22 names in positions, I thought I would offer the opportunity for input from all readers first. People can get very passionate about a subject like this, particularly when their favourite player is snubbed, or someone they feel is undeserving gets in. This is your chance to have your say.

Similarly to the annual All-Australian Team, we are going to start with a squad and whittle our way down to end up with our best 22 of the AFL era.

Yes, the AFL era, and you know what that means? It means that anything accomplished prior to 1990 does not count. This will hurt players like Ablett Snr, Lockett, Williams and Dunstall, who would probably be in everyone’s team if we were to include their entire careers, but for the purpose of this exercise, we are focusing only on the period from 1990 to now. Prior to that, the AFL was the VFL, and really… to include what was happening then is not just bending the rules I’ve just laid out, it’s a little disrespectful to teams like Freo, who have an already limited window to have players qualify.

Let’s start down back, as the proctologist said to… well, you probably, once you turn 50.

Did getting the nod for Full Back of the Century actually damage SoS’ reputation? It seems like it became fashionable to knock him after that. People were stating that he wasn’t even the best full back in Carlton’s history (Southby), let alone in the previous hundred years, league-wide.

As someone who watched him, there was no doubt he was a star. I’ve heard him called a koala for the way he clung to full forwards, but we are talking about a time when this was allowed. If he was playing to the rules of the day, how can we punish him for it now?

We miss the first five years of Silvagni’s career here as he debuted in 1985, however, he really peaked once the league became the AFL.

He gets an extraordinary amount of hate, whether it be for not playing on a designated opponent or more recently for diving, but there is no arguing Rance’s credentials. He has become the best defender of his generation, with only injury robbing him of the chance to pick up a sixth-straight All-Australian blazer.

Rance’s career is incomplete, so he has the chance to strengthen his claims in 2020 and beyond. Is what he has achieved to this point enough to get him a spot in the back six?

Scarlett took a few years to find his feet in the Geelong team, but once he established himself, he didn’t look back. 2003 was his breakout year, and he proceeded to claim scalp after scalp as the pillar in the Geelong defence that would power them to three flags in five years.

As if his effort in the contest weren’t enough to sway you, there was that time he put one on Haydn Ballantyne’s chin… maybe that’ll sway you?

23 years in the role… how much does longevity count in terms of greatness? It’s the not the only time we’ll ask this in compiling this team. Fletcher is an Essendon darling  – from a kid who looked all arms and legs to a mature man who also looked all arms and legs, his career in defence for the Bombers was a highlight in an era full of highlights.

A little… hmmmm, clumsy at times, Fletcher ran afoul of the tribunal here and there, but was there anything better than seeing him go the torp and getting onto one? Is he good enough to leap Rance and Scarlett?

Look at that CV… bloody impressive.

I happened to re-watch the Adelaide v North Melbourne game from 2003 yesterday for a bit of research, and the fluency of McLeod is so evident. He is classy, balanced, poised… he is the complete package – what a luxury for Malcolm Blight to be able to play this bloke in the backline in that 97-98 period. Only four blokes have ever won two Norm Smith’s and McLeod is one of them. For me, he’s a lock, but when push comes to shove, maybe others will feel differently?

Started at the Bombers, won his flag, his Brownlow and headed home to become one of the foundation members of Port Adelaide in the AFL where he repeated the premiership dose.

Amazingly able to contort his body in the air, Wanganeen appeared freakishly agile at times, and was just as elusive at ground level.

The General had a great career at Hawthorn before taking the risk and heading to Brisbane for two more years. This move had the potential to take a little gloss off a polished career. It didn’t. Hodge commanding the Brisbane backline enhanced his reputation.

It was a reputation that was forged as the leader of a Hawthorn outfit that won three consecutive flags, with Hodge instrumental as a dual Norm Smith winner.

Can we agree that Wayne Carey will hold down centre half forward in this team? I sure hope so, because if we can’t, it’s going to ruin my argument for Jako.

A real threat for a spot on the half back flank, Enright was the quiet achiever in the Geelong backline through 332 games.

Ultra-consistent, Enright was accountable whilst being creative, with his run from half back integral to Geelong’s sustained success last decade.

Maybe a surprise pick for some, but Heater’s numbers over his career find himself in the top 20 for the following categories – kicks, marks, rebounds, uncontested possessions, and running bounces. Not bad, eh? And he ain’t finished just yet.

Shaw has never shirked the toughest jobs in the game, lining up on Robbie Gray one week and Charlie Cameron the next. He’s durable, consistent and though he strikes me as a real pain in the ass, his desperation and refusal to give up are admirable qualities.

Hart had a wonderful run in the early years of the Crows, right through their premiership years and into the 2000s with his wonderful combination of man-to-man defence, and run from the backline.

I remember a point in time when you would see a full forward streaming out on a lead, looking to take a chest mark, and out of nowhere would come the fist of McIntosh to make an unlikely spoil.

Blessed with blistering speed, the West Coast defender was able to shut down some of the biggest names in the game in an era where full forwards were king.

Unsung, and low profile in a team full of high profile stars, Glass built a solid career as one of the best defenders in the game and was held in such high regard that he was elevated to All-Australian captain in 2012.

He was the one the team looked toward to lead them out of an era where drugs rocked the club, and on the back of the work of Glass, a new era was ushered in at the Eagles.

Memories of that brutal Brisbane back six always seem to involve Leppitsch for me. Charged with roaming around centre half back, he was close to impossible to move, and combined with the likes of Mal Michael, the Scott Brothers and Chris Johnson to wreak havoc on forward structures.

As hard as nails, Leppa was never far from the action when things got a little fiery.

So, who do you have as your back six for the best team of the AFL era? Don’t forget, only the accomplishments from 1990 onwards count in this, so make sure to take that into account.