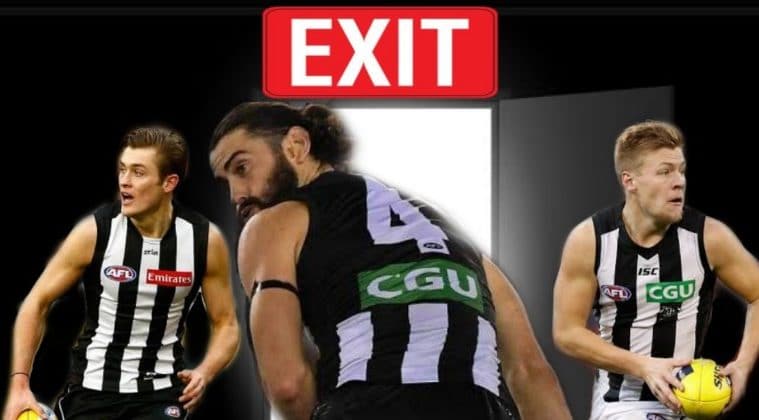 Once it became apparent during the trade period that James Aish looked set to leave Collingwood for very little in return, the reality of the looming salary cap squeeze started to hit home.

We are still 12 months away from a period that could make or break the Collingwood Football Club, but the future is very much on the mind not only of the list management team, but of three individuals who have some serious negotiating to do in the near future.

If they choose to negotiate.

Darcy Moore, Brodie Grundy and Jordan de Goey are all out of contract at the conclusion of the 2020 season, and given the talent they possess, you can guarantee clubs are already circling in the hopes they will not get the offers they’re hoping for from the Holden Centre. Every day that ticks by without a new deal with the Pies penned, list managers from elsewhere get a little more interested in the possibility of pinching one of these stars out from under the Pies.

This seems to be the sticking point for two of the three players, with both Grundy and de Goey reportedly desiring the security of long-term contracts in lieu of huge short term pay days. As it stands, Collingwood are reportedly only offering a three year commitment as a standard. It is a stance that emulates what Hawthorn has been doing for several years now, resulting in several mature players exploring options elsewhere – simply put, the Hawks will not overcommit to players, particularly older ones. Whilst those mentioned at Collingwood are not in the older age bracket, anything above three years is a huge risk. Really, it is good business for the club.

But business only works when it benefits all parties, and if de Goey and Grundy are looking for longer deals, this kind of business isn’t working for them at all.

Though clubs may preach loyalty, there is no question we are entering an era that is more akin to seeing players willing to jump ship. Looking at American sports, players are jumping teams with an alarming regularity. They call it the “player empowerment era”, with the talent increasingly deciding where they want to play and how long they’ll commit for. The power used to lie with the teams – those days are long gone.

The Adelaide Crows will definitely throw their hat in the ring for Brodie Grundy. From South Australia, the Crows will be willing to throw the kitchen sink at the big man to bring him “home”. Does that mean they’ll commit to a seven-year deal that will take Grundy well into his thirties? Would you?

All it takes is one major injury and a commitment like that can come back to bite hard. It is a risk versus reward scenario, and the Crows may have seen enough of the potential rewards of having a player like Grundy controlling the ruck to happily accept the risk. He has hurt them enough times for them to have vivid memories of what he’s capable of.

The de Goey case presents a further problem. Also reportedly looking for a seven-year deal, de Goey is a 23 year old with as much potential to become a superstar as anyone in the league. Some believe he is already there – I’m not one. He is electrifying in patches, but we are yet to see the consistency from him that would make him a top ten player in the game.

Jordan de Goey had a 2019 that was injury-hampered. You can understand the reluctance of Collingwood to commit to a long term deal with a player whose hamstrings are starting to become a worry. Do they bite the bullet and secure the prodigious talents of de Goey as soon as possible regardless of doubts, or sit back and watch things play out, holding fast to their three-year offer and hoping that he decides to stick it out with the team that stuck by him through a 2018 pre-season that saw him run afoul of the law?

What happens if de Goey has that huge breakout season and firmly stamps himself as one of the top five players in the game? How do the Pies justify NOT coming to the party with a long term deal?

Darcy Moore was linked with the Sydney Swans after the 2018 season, and coming out of contract, could be another who opts to seek opportunity elsewhere. He is also just 23, and has displayed the talent to indicate he could become a dominant defender, but again…those hamstrings are an issue.

Moore has been plagued by hamstring issues over the past two seasons, and whilst there have been no demands of a seven-year deal from his end (that we know of), Collingwood would be very wary of committing to a long-term deal with someone whose hamstrings have the durability of old elastic bands.

Even if Collingwood are cautious with Moore, other teams may be more willing to take the gamble, backing their medicos to get him right. And it’s not as though decisions to leave the club aren’t in his blood. His father won a Brownlow with the Pies, captained the team, then packed up and headed to Melbourne, where he went on to win another Brownlow. It’s not as though the Moore family have a history of staying put just because it’s expected.

So, what’s the likelihood of Collingwood losing one of these players? How about two? Could they lose all three? Unless they bend in regard to their views on contract duration, the Pies could be face to face with their worst-case scenario in 2020. As time ticks by and these three stars remain uncontracted, there will be an increasing number of nervous people in the Collingwood football department.

When you add in that the Pies have perhaps their greatest modern player, Scott Pendlebury coming out of contract, they really have some work to do. I expect Pendles will sign year-by-year from here, given his age and history with the club, but he does love the NBA… maybe he likes the idea of player empowerment, himself?

Collingwood is in the premiership window. They have talent right across the board and a coach who has become one of the most respected in the game, but as we approach 2020, a cloud of contract uncertainty hangs over the team.

The Pies will be hoping this blows over quickly, because the ensuing storm could define their team for the next few years, and derail a team looking at the genuine chance at picking up premiership number 16.