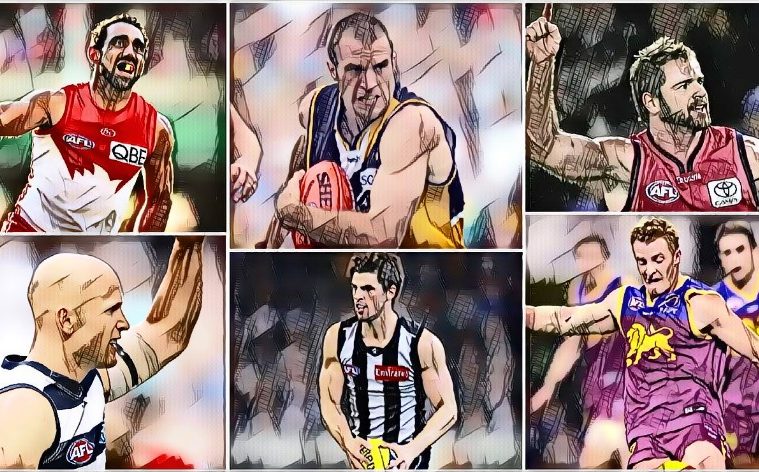 Team Of The AFL Era – The Midfield Squad

So, after some debate around the defenders (click here), it’s time to move to the mids.

Realistically, we have six or seven spots for mids in this team, which will make this a real squeeze when you look at some of the names involved. A centre, two wings, ruck rover, rover and a couple on the bench. That’s it.

I fully expect the forward line to be incredibly tight as well, so we cannot expect All-Australian levels of repositioning to squeeze midfielders into the side. Some will be incredibly unlucky to miss out – some may be considered incredibly lucky to get in, but every single one of these players listed below has a case to be included in the best team of the AFL Era.

Again, we are only counting accomplishments from 1990 to current. As mentioned in the previous article, this will no doubt hurt the chances of players like Lockett, Dunstall, Ablett Senior and Diesel Williams, all of who played in the VFL before it changed its name and officially went national.

But let’s cross that bridge when we get to it. For now, here are the contenders.

So, does missing a premiership matter? He was best on ground in a loss, so it’s not like we can blame Bucks for not performing on the biggest stage. He has checked every box EXCEPT the one that really matters. If you’re picking your team do you want the brilliant player who never took that final step and achieved success, or do you pass on him to take the players who stood on the dais with their hands raised?

The ultimate winner, Voss was close to indestructible at one stage of his career. Remember Scott Burns cleaning him up in the Grand Final? Remember Voss bouncing to his feet and being involved in the very next play to create a goal for the Lions?

Boo all you like, but his record is as good as anyone. The two Brownlows are the standout, but Goodes modified his game to move from the ruck to on-baller/forward at points in his career. That he had to completely change the way he played, and doubled-up on the success with a second Brownlow are testament to just how good he was.

For mine, has to be in very strong consideration to get a run in the midfield.

Crawford was a shining light for the Hawks at a time where they were pretty ordinary. He saw them through some dark times and was rewarded in 2008 with the team’s first flag since 1991.

His 1999 season is one for the ages, with him snaring the Brownlow/MVP double, but is that one brilliant year enough to propel him into the best team of the AFL era?

His 2000 was amazing, but with just two All-Australian berths, is that one amazing year (and the 99 finals) enough to elevate the Greek God into this team?

I’m not sure I can argue against eight All-Australian selections. It speaks of a man who was ultra-consistent over 11 years in the game and someone who was able to perform at the highest level across a long duration.

Adding to the appeal for me was that element of Mongrel that Roo possessed. Put yourself in harm’s way and Ricciuto was going to find you, and make you pay, Ask Dean Kemp…

The lockiest of all locks, Ablett has a record of individual success that can simply not be denied. Five MVP awards… bloody FIVE! The next best is two.

Ablett adds to his personal success with two flags with the Cats, and truth be told, he was probably robbed of a record ninth AA berth due to forgetful selectors opting to disregard his brilliant first half of 2019.

Burst onto the scene as perhaps the most ready-made impact midfielder we’ve seen. His ability to take the footy and hit top speed in a matter of steps blew opponents away, and set him up to earn a Brownlow in his third season in the system.

Judd added a second medal in 2010 after the switch to Carlton and should be very short-priced to make the team.

There are a few on this list who are fighting a tough fight to be on the team. In fairness, their claims might be strengthened in two years’ time. Fyfe is one – his two Brownlows and two MVP awards may already be good enough for some, but for others he may need another great season or two.

Has what he’s done too date been enough, or do you require some more sustained greatness?

Ahhhh, speaking of those who still have time in the game remaining, heeeeere’s Dusty!

Two Norm Smith Medals puts him in rarefied air, and the accompanying Brownlow makes him the only player to ever have the Brownlow/2x Norm Smith combination. I don’t think there is anyone who thinks Dusty will not end up in this team… eventually.

But is his time now? Or do you need to see more?

Let’s consider Danger in context with Nathan Buckley. The big knock on Bucks is that he was never able to secure that flag. He played well in a losing GF, but the lack of a flag hurts him.

Does it hurt Dangerfield as well? Or is his sustained form over the past several years enough to propel him into the team? Danger is another with a bit of time left to improve his stocks. A second Brownlow… a Norm Smith… a Premiership… what will it take for Danger to be a part of this esteemed company?

The stats probably don’t do him justice. In his day, there was no more damaging running player in the game. His ability to tear a game apart with leg speed is legendary, particularly if you’re a fan of West Coast.

But there is some stiff competition here. Are your memories of Matera tearing down the wing enough to see him slot in over some of the other names mentioned?

I wrote above about Ricciuto’s consistency… well, Pendles ain’t that far off, either.

Duelling with Bucks for the title of greatest Magpie of the modern era, he has the thing that Buckley coveted most – the premiership. Is that enough to push him past his current coach?

Pendles has been called the Rolls Royce for years, and continues to cruise along with excellent form. How many years does he have left? And if there’s two more, with another AA selection in the mix, his claims on a spot in this team may be hard to deny.

Back-to-back Brownlow medals…  the only player in the AF era, and the first in the V/AFL era since Keith Greig in 73/74, Harvey is often discounted due to the Saints’ lack of success in his time there, but his credentials are impeccable.

His eight All-Australians are an equal record and though he debuted in 1988, he loses only 16 of his 383 games due to ineligibility before the league became the AFL.

The spiritual leader of the West Coast side in both the glory and not so glorious days, Cousins was a gut-running machine, and whilst his Brownlow Medal year of 2005 was his peak, his nest season went close to matching it.

Did Cousins falling off the rails ruin his chances of a berth in this team? Or do you wear blue and gold glasses when it comes to Ben?

If we were counting VFL accomplishments as well, it’d be hard to go past Diesel, but with an MVP and Brownlow missing from his CV in this criteria, it brings him back to the pack.

Just one B&F in this period for Williams as well, but the difference he made to the Carlton side after moving from Sydney went a long way to securing them the 1995 flag.

He would have to be a contender to be rated Hawthorn’s best, and most consistent performer of this period. Mitchell’s ability to win clearances and fire off quick handballs to teammates in better position was Greg Williams-esque, and Mitchell’s career stats ended up very closely aligned to those of Williams.

A premiership captain, Mitchell selflessly stepped away for the role to hand over to Hodge. Arguably, his best year came in 2015, when he averaged 31.17 touches per game, career-high numbers in his second last season at  the Hawks.

Looking at the crop of players in this mix, the Brisbane Lions get two from the dominant three-peat teams that carved out their place in AFL folklore.

Joining Michael Voss is Simon Black. A quieter achiever, Black’s wonderful skill with the ball in hand, and ability to get into the right spots at the right time made him a damaging weapon. His performance in gathering 39 touches in the 2003 Grand Final was one of the more dominant individual midfield performances of the AFL era. Along with James Hird, Greg Williams, Jimmy Bartel, Nathan Buckley, Dustin Martin and Chris Judd, he has managed to secure the rare Brownlow/Norm Smith double.

The heart and soul of the Bulldogs at a time when success eluded them, West was a worker, right from the outset. Averaged 25+disposals per game for ten years and basically took out a mortgage on the Charlie Sutton medal for the majority of his time in the red, white and blue.

Unlucky at times, West finished second in the Brownlow on two occasions (00 and 06) and third in 99. Was the victim of the infamous Shane Woewodin two-vote game in 2000, where the Melbourne mid had 17 touches and still managed to poll.

The thing that jumps right out at me is the All-Australian captaincies. Three times, Joel Selwood was recognised as the high quality leader he is.

Selwood boasts an impressive 73% win percentage for his AFL career, indicating that he has been part of, and leader of highly competitive teams, and his record four most courageous player awards from the AFLPA are a sure sign that he is recognised by his peers for his willingness to put his body on the line.

Geelong’s Mr-Fix-It through their glory years, Bartel was deployed wherever the Cats needed someone to plug a hole. Could go forward, kick goals, win clearances, drift back and play in the hole… Bartel is a footballer’s footballer.

With a great pair of hands, Bartel’s ability to outmark his opponents, and propensity to elevate his game when things got tough are legendary at Geelong. The amount of times he and Selwood dragged the Cats over the line against my Hawks make me feel sick.

An absolute workhorse, Swan was never the most stylish of players, but when it came to hard run and ability to win a contested ball, Swan was a beast.

Claiming a Brownlow in 2010, Swan was able to average 30+ disposals in five straight seasons from 2009-13. Sometimes overlooked as being in the shadow of Scott Pendlebury, there are many who throw Swan’s name into the mix when discussing the modern greats of the Collingwood footy club.

So, who else should we be throwing into the mix? Josh Kennedy? He has been huge for the Swans over a number of years and is one of three players to register 400 contested touches in a season (He’s done it three times!). Matty Boyd? Jobe Watson? Lenny Hayes? Nigel Lappin? Craig Bradley? Paul Kelly?

See if you can sway me around to your way of thinking in the comments.