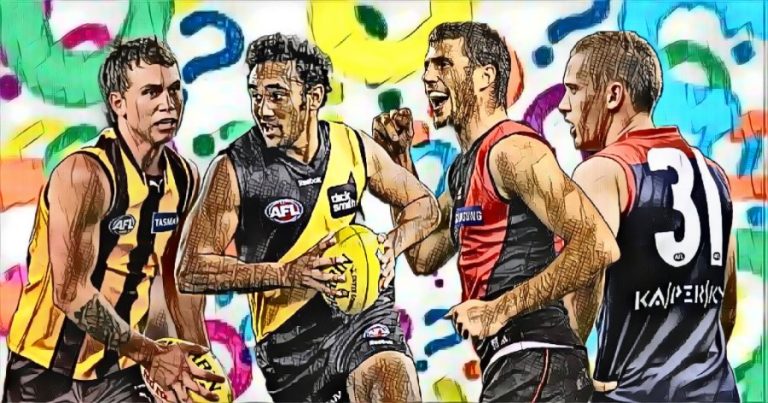 This time of year can make or break a list manager. One wrong call can have their name associated more with who they DIDN’T draft, as much as who they did. Sometimes they get it very right, and others they get it very wrong. Sometimes, even when they turn out to be right, they’re considered wrong for quite a while – it’s not a great situation.

All it takes is one move to change the trajectory of a club, and possibly, the league, itself.

The 2004 draft will live in infamy for Richmond fans. Anointed with picks 1 and 4, the Tigers were certain this was to be the draft that turned around their flagging fortunes. They grabbed Brett Deledio at number one overall; a move that has to be considered a success, even when you look at what followed. Deledio was a star for the Tigers at a time when the team was simply not performing. Whilst the Tigers team whimpered, Deledio had moments where he roared. He played 243 games in yellow and black, averaging above 24 disposals per game in six seasons. He would add two Jack Dyer Medals to his name before his time at the club ended and he headed to GWS to play out the remainder of his career. When all is said and done, despite missing out on the Tigers’ premiership glory, he’ll be remembered as a Richmond hero.

Pick four, however, did not pan out as well.

Tiger fans were not too displeased at the time when Richard Tambling’s name was called as the fourth overall pick in 2004, one pick ahead of a man named Lance Franklin. Tambling was very highly rated, and to be fair, most mock drafts had him as a top five pick. There’s no need for a vivid history lesson here. We all know what Franklin has accomplished, and continues to accomplish at both Hawthorn and Sydney. He has been the best forward in the league for the past 14 years and will one day ascend t the AFL’s highest honour – being named as a Legend in the Hall of Fame. Tambling, however, played 124 games over eight years in the competition at Richmond then Adelaide. He peaked in 2009, averaging 21.5 touches per game, however his drop off in 2010 was significant. With just three games in three seasons with the Crows, his career ground to a halt in 2013.

Richmond were awarded an end-of-first-round compensation pick when Tambling moved to Adelaide in 2010 and also received pick 51 (Dean MacDonald) but imagine what could have been with just one pick different… Buddy in yellow and black. What could it have meant for the Tigers and Hawks?

But it wasn’t all bad news for the Tigers. Yes, they may have botched the 2004 draft, but that led to redemption. They picked up a youngster named Dustin Martin with pick three in 2009. Melbourne had picks one and two that year and were later found to be guilty of tanking to secure the worst record. They opted for elite runner, Tom Scully and future Demon captain, Jack Trengove. Neither of these players finished their careers at the club, with Scully opting to head to GWS on a huge contract, and then to Hawthorn, where he was unable to recapture the form that made him one of the competition’s best gut-runners. Trengove’s body let him down after he was appointed captain. Meanwhile, Martin elevated his game to become THE superstar in the competition in 2017 and repeated the dose during the finals of 2019 and 2020 just in case you needed a reminder. The Tigers are thanking their lucky stars that Martin took a little bit longer to come on. If Melbourne had their time over again, how could the drafting of Martin have changed the outlook of their last decade? Would that long-awaited flag have arrived a little earlier? And where would the Tigers be without Dusty?

Speaking of having your time over again, Hawthorn would like to have another crack at the 2006 draft. Holding the number six pick, the Hawks opted for tall forward, Mitch Thorp, despite having drafted both Franklin and Roughead a couple of years earlier. This allowed the Cats to pounce on a bloke named Joel Selwood.

Looking back, the number of times Selwood dragged his team back into games against the Hawks seemingly on willpower alone, or made crucial plays to carry them to victory during the Kennett-Curse years tore the heart out of Hawks supporters. Selwood retired as premiership captain and an undisputed champion of the game in 2022. He was one of the most influential players of the last 15 years. His courage and leadership were the underpinning principles of the continued success of Geelong. He also happens to be one of my favourite players, and as a Hawthorn supporter, watching him in the hoops when he could have been ours… it killed me!

Behind Hawthorn’s established key forwards, Mitch Thorp was in an unenviable position from the outset. He’d manage just two games in his AFL career, and was chosen in part due to concerns around Selwood’s knee. If those concerns were proven correct, Selwood would’ve been long retired from AFL footy. I guess a few medicos got that one wrong, and the Cats benefitted greatly from the overly-cautious Hawthon approach.

Garry Lyon was a Jimmy Toumpas fan. He publicly lauded the talent of the young Demon mid when he was drafted fourth overall in 2012. Toumpas was a pick in hope, but hope only lasts so long when success doesn’t follow. Then it turns to disappointment, and that’s what Toumpas’ time at Melbourne was. His 15 disposals per game in nine games in 2015 were just not enough to sustain the hope. He became a Port Adelaide player at a time the Power became a current graveyard for players who once had potential elsewhere, and drifted off into footy history with 37 games to his name in total.

Then, of course, is the one who got it right, yet was still viewed as getting it wrong.

They’re an impatient bunch in the world of AFL.

Luke Hodge went first overall in 2001, but it was the third pick, Chris Judd, that set the footballing world alight in his first few years in the competition. Hawthorn considered picking Judd, but opted for Hodge in part due to concerns about Judd’s suspect shoulders. He’d already had surgery as a junior and there was a worry his body would not stand up to the rigours of AFL football. Judd did more than stand up; he stood head and shoulders above the competition, winning the first of his two Brownlow Medals in just his third season with the West Coast Eagles.

But Hodge was no bust at Hawthorn. Slowed in his first season with Osteitis Pubis, Hodge gained fitness as his career progressed, and compiled an outstanding resume of his own. Unfortunately, that didn’t save Hawks recruiting manager, John Turnbull. Former Hawks coach, Peter Schwab believes that the Hodge pick was the catalyst for Turnbull’s sacking two years after the decision was made. Whilst Judd burst from the blocks, Hodge took a while to warm to the pace of the game at the highest level. Whilst Judd was a sprinter, Hodge was running the marathon.

Sadly, it took Hodge a little too long to hit his stride to save Turnbull.

Whilst Judd’s numbers in his first three years cast a dark shadow over those of Hodge, it is the number of games played that makes him look even better. Whilst Hodge worked through injuries, Judd was durable from the outset, Judd played 68 games in his first three years. Hodge would manage just 45. At that point, you would never have picked that it would be Hodge with the longer career, and a second lease on football as part of the Brisbane Lions’ resurgence, playing on for four years after Judd was well and truly done.

Turnbull went to work part time for the Fremantle Dockers, but will be best remembered for choosing Hodge over Judd. It was short term pain and long term gain for the Hawks. Judd would lead the Eagles to one flag. Hodge would lead the Hawks to three, and be part of a fourth. Hindsight is a lot kinder to John Turnbull than the Hawthorn hierarchy was at the time.

There are many other draft day blunders. Essendon used pick two in 2006 to snare Scott Gumbleton. They could not foresee the litany of hamstring injuries that would hobble him over his 35-game career, or that those taken after him – Boak, Selwood or Jack Riewoldt would emerge as stars of the game.

St Kilda squandered pick nine on Caydn Beetham in 1999. He’d go on to play 37 games for the Saints. Bob Murphy went just four picks later, and could have brought his hipster wisdom and tragic facial hair to St Kilda… as if they didn’t have enough issues.

The Dees took Lukas Cook with pick 12 in 2010 (after the Suns took Daniel Gorringe at pick 10) but made up for that error by acquiring Tom McDonald with pick 53. And the Western Bulldogs used pick four in 2002 to acquire Tim Walsh. You only need one finger to count his total amount of senior games, but hey… he averaged a goal per game.

In recent seasons,s we’ve seen the Crows snatch up Fischer McAsey with both Caleb Serong and Hayden Young heading to Freo immediately after. Will this be a move that see Adelaide fans shake their heads in years to come? Are they shaking their heads, already?

And we don’t need to look too far to find a team who have buyer’s remorse about their selection with the number one overall pick, do we North fans?

The experts get it wrong sometimes. Some kids peak early, whilst others promise so much and deliver so little. As we head toward this year’s effort, let’s hope your team isn’t the one lamenting what could’ve been when they revisit the 2022 AFL Draft in a few years’ time.