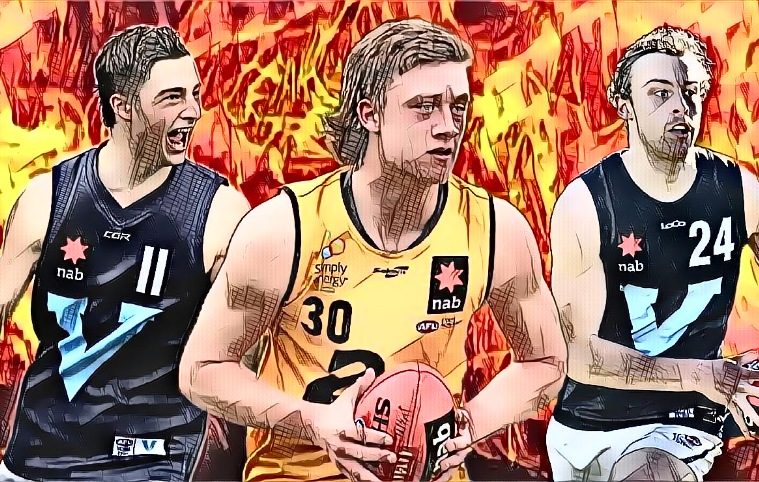 If you’re anything like me (and no, I don’t mean old and about ten kilograms heavier than you’d like), you probably don’t know a hell of a lot about the blokes about to be picked in the AFL Draft.

I mean, I pay a lot of attention once they start playing in the league, but with kids, work, lazing around the house, and engaging in the occasional form of exercise, I don’t have the time to research how well a prospect is playing in the NAB League, or how high he jumped at the Draft combine. I don’t have much of a life, but I do have one.

And so, at this time of the year I feel like the type of person who has a bet only on Melbourne Cup Day. I genuinely have no idea what’ll happen. I look at the field of horses, see that a few have had recent wins and have a short-price as a result… and then I pick my horse based on its name.

So, with that in mind, I am completely disregarding all the phantom drafts, including our own double-whammy, compiled this year by the devilishly handsome (and single!) Alex Docherty, and the new-father amongst our crew, Brett Hodgson (congrats, Hodgey). If you want quality analysis and predictions of the draft, have a read of their column, below.

I see you’re still here – that must mean you’re either a little more adventurous, or slightly curious as to where I am heading with this. More power to you – I like the way you roll.

What I would like to do is look at the draft the exact way I look at the Melbourne Cup, and pick a draft order based on the best names in the game.

Childish? Hmmmm, I prefer “childlike”, but whilst some are going to be talking about Jason Horne-Francis, my interest likes elsewhere. Obviously, this is not meant to be taken seriously, so if you do, despite this warning, it’s on you. Let’s have a look at the 2021 AFL Draft on name value alone.

So hang on… a key forward whose name is “Amiss”?

You can just picture Dwayne Russell rubbing his grubby little hands together the first time this kid has a shot for goal, can’t you?

“Amiss, on the run… fires at goal. And lives up to his name.”

Calling you out early, Dwayno – you need to get creative, buddy.

Come on now – either he is going to be one of the greatest, or people will immediately relate him to those who have their way with farm animals.

Too far, you think?

Okay, here’s how I picture this playing out.

In a wild clash, Sonsie appears to hurt his leg as he collects an opponent. He knocks the bloke unconscious and is referred straight to the AFL tribunal to answer for his alleged crimes.

He is an unassuming kid, and limping into the room, he seems meek… as non-threatening as you can get. He looks out of place in the cut throat world of the AFL. Sonsie appears before the tribunal and manages to concoct a story so elaborate that the tribunal members find themselves simply unable to prove him guilty.

As he walks from the tribunal, his limp starts to disappear. It is only then that the tribunal panel realise he has taken aspects from the immediate surrounds and use them in his story to get himself off the charges.

Tyler Sonsie walks free… if he even existed at all.

Frankly, my dears… he doesn’t give a damn.

If the more feral of the opposition supporters don’t calling him “Rachel” after the first time he kicks the footy, I’ll have to start questioning what has happened to footy crowds.

I used to watch a lot of early 80s WWF (or WWE, if you prefer) and one of my favourites was Paul Orndorff (he recently passed away – rest in peace, Mr Wonderful) and he used to become incensed when the live crowd would chant “Paula” at him during a match.

If the crowd gets on Rachele’s case, I hope he reacts the same way, complaining to the umpire, kicking at the fence, and generally flying off the handle, which leads to him assaulting one of his opponents as the umpire’s back is turned.

And if he turns on one of his popular teammates during a game, he’ll be my favourite.

The new “bad boy” of the league? He’s got a bit of a rep before he even plays a game. Lucky his parents didn’t name him “Lucifer”.

You can just see it now, right? What a pity St Kilda won’t have a decent pick in the top ten. Maybe he’ll go in the early double figures and he’ll end up at Moorabbin. Grabbing ‘The Sinner’ to play on the Saints would have made a nice twist.

I reckon he’ll have to make a name playing against them.

I don’t often take the time to read the actual pharmaceutical names for some of the products I’ve used over the years, but I reckon I may have seen this name on one of the de-congestive nasal sprays I’ve used.

“Hey, yeah… I’m all stuffed up and need a decongestant.”

“ No problems, you incredibly attractive man – here, try some Nasiah Wanganeen-Milera. It’ll clear you right up.”

I’d hire him to do my plumbing.

Got a leak? Alleer is on the case!

Arlo is a dog’s name.

Terrible decision naming him that.

Possibly the coolest name in the draft.

If his teammates call him Macca, they should be shot. You don’t elongate a person’s name to make a nickname – that’s not how these things work at all. Maybe they can call him Ma? Or maybe Just M?

I kind of dig it when a player has a name you don’t need to shorten. I reckon this bloke will be like Cher, or Beyonce – just one name will do to recognise him. That’s Mac.

Erasmus was a Dutch philosopher. It’s a pretty cool surname to have. And then this bloke’s parents went and ruined it all by naming him Neil.

If they have another son named Bob… I really hope they don’t introduce them as Neil and Bob.

People will get the wrong idea.

And there we go – just a bit of fun and probably indicative of my ridiculously poor knowledge of the Draft. I intentionally left this til late in case the boys at HPN Footy (good site, look them up) included it in their consensus phantom draft. I’ll link it below – always a good read.