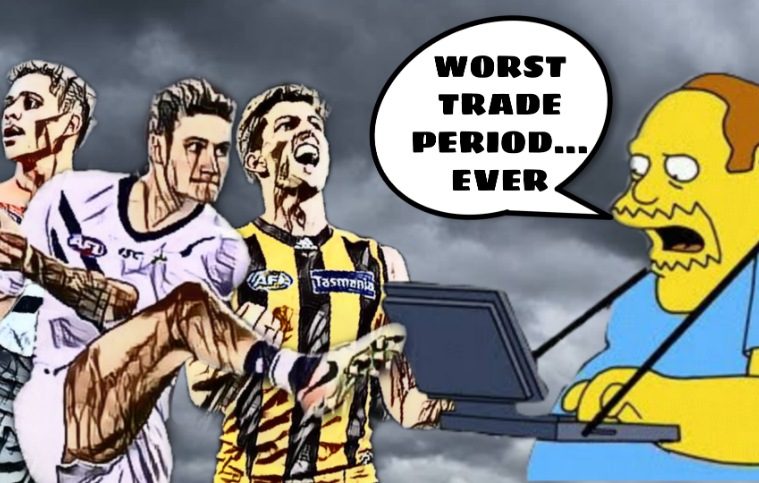 Worst Trade Period Ever! Do The AFL Need To Tinker With Trades?

Trade period came and went with more a whimper than a bang.

There were no surprises, no blockbusters and no real substance to the eight days of posturing and posing. There were potential trades that would have, could have, and perhaps even should have spiced things up, but the current nature of the AFL Trade Beast puts a lot of emphasis on the desires of the player.

And that leaves the clubs with little power to improve their lists.

It is a bit of a conundrum for the league, its players and the supporters. On one hand, the desire for a team to rapidly improve is something we all share. Those who watch US sports understand just how quickly a savvy trade can turn the fortunes of a team around. It is particularly prevalent in basketball. With just five players per team on the court, a huge trade can mean an entirely different look and feel of a team, especially when that player plays 40 of the 48 minutes. It can change the fortunes of a team in one fell swoop.

In the NBA, players are treated as little more than assets to move when and where it suits the team. Sure, there are some who are so good that they demand, and receive no-trade-clauses in their contracts, but for the most part, the cattle are herded by owners and general managers as they see fit.

Of course, those cattle are incredibly well-compensated bovines.

Things are different in the AFL. Here, the trading process is a little more… humanitarian. You cannot simply trade a player away because he has become surplus to your needs – if he has a contract in place, he can negotiate, or in some cases, demand where he wants to go. And the team is then required to do what they can to make that deal happen.

In many ways, it ties the hands of the team, forcing them to negotiate with just one opposition team, as opposed to 17. In the process, it kills off any potential bidding war that may see the team trading the player actually get above market value or, heaven forbid, above market value.

This trade period saw a couple of instances that amounted to nothing. More than a couple, actually.

The details of a GWS-Hawthorn deal to send Luke Breust to Greater Western Sydney were all but ironed out. The Hawks, heavily into their rebuild phase, would have enjoyed the fruits of another first round pick for trading their faithful club servant, whilst GWS would give Toby Greene a dangerous partner in crime.

One problem, though – Breust didn’t want to go. Deal off.

Rory Lobb had been reported as a potential departure from Fremantle all season, so come trade period, it was no surprise that his name was linked back to the club he initially left to head to Freo. The deal fell through, but by specifying GWS as his preferred destination, he effectively reduced the window of opportunity to just a crack. Unable to satisfactorily work a deal that pleased all parties, the deal was off.

Jordan Clark wanted to head back to Western Australia, after the Cats kept him on the sidelines (yet still thought a first round pick was warranted… give me a break). He wanted to go to Freo, and things got pretty heated. Like Tim Kelly before him, why only one WA team in the mix? Ditto for Adam Cerra – why only one team in the mix? Eventually the Clark deal got done and he is now a Docker, but again, the Cats took what they perceived as a slight loss as they had no one else to bargain with

And then there was Bobby Hill. Apparently desperate to leave GWS, Hill trotted out a few reasons (excuses) as to why he wanted to leave and why he really wanted to play for only Essendon. The deal fell through, but had he opened himself up to more Vic-based options at the outset, could he now be a player on a different team? This one reeked of amateur-hour.

Many laud the decision of the AFL to put the power in the hands of the players, however, there is no doubt that it tramples all over the toes of an exciting trade period. Whilst the AFL would hold its head relatively high in terms of player empowerment, the lack of maneuverability for the clubs most likely drags out rebuilds for a couple of years and prevents the clubs contending from topping up their list in the way they would probably like to.

Would Gold Coast be in the same position if the club was able to trade without considering the demands of the player? Lynch only wanted to go to Richmond. Prestia too. Ablett only wanted to go to Geelong. Dixon only to Port. It tied their hands and pigeon-holed them into situations where they had to deal with one team. How could they possibly get value for money in those situations?

The problem here is that, other than the highest-paid players in the game, AFL players simply do not make enough cash to be subjected to a sudden move across the country at the whim of their list manager and club. Whilst those in the NBA are treated like cattle, they are more akin to prize bulls, worth many millions of dollars per season. That’s in $USD as well. Here, players make a tenth of that in the best scenario – maybe even a 30th in other instances of what their American counterparts do. To expect them to subject themselves to a spur of the moment decision that could see them uproot their family and move from Queensland to Melbourne, is pretty unrealistic.

So, where does it leave us?

On one hand, we have a trading situation that cuts its own throat with the processes we’ve put in place. Yes, it is fair to the players, but it kills off the chances of teams to move in the way they would prefer to.

Yes, the trade period is garbage. It is a lot of bluster and little in the way of action. A lot of posturing and very little substance, but the reasons for that are valid.

In the end, the AFL is one of the only leagues in the world that treats players, their families, their friends and so on… as though they matter. Whether you like it or you don’t, and whether you think the Boys Club of the AFL is doing a good job of it all, they actually kick a goal in this regard and should be commended.

But that doesn’t mean I like it as I look at my phone for trade results and see bugger all coming through. Perhaps it is a small price to pay?

And if you were going to change it, what could work whilst remaining fair?