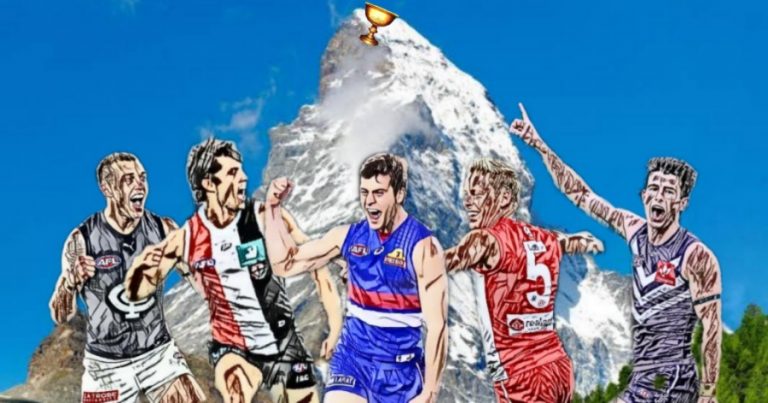 The Holy Grail of AFL Stats – Chasing the Quadruple Double

Welcome to my weekly column for the Mongrel Punt where I take a deeper dive into stats of the AFL; not always your conventional analysis, but more often an irreverent, irrelevant, and quirky take. It’s a break from the day-to-day AFL scrutiny with the stuff you never asked for but never knew you needed.

In this week’s edition, we start with the triple-double before looking closer at the elusive quad double, a stat that is approaching a seven-year anniversary since its last occurrence.

In basketball, a commonly referred to stat that players can achieve is a triple-double, which is double figures in the categories of points, rebounds, and assists. Current LA Laker, Russell Westbrook is the all-time NBA career leader in this category achieving a triple-double 194 times in a thus far 1021 game career. Therefore, he gets a triple-double approximately once in five matches or, to be exact, 19% of the time.

In an AFL context, there are four categories of stats that can be relatively commonly made by players in double digits, being kicks, handballs, marks, and tackles. Whilst double-figure kicks and handballs are generally achieved individually by around 40% of players each match double figure marks or double-figure tackles are much less common.

In fact, generally only one or two players each match will have either double-figure tackles or double figure marks, thus having the option of either gives players a more reasonable chance of scoring a triple-double.  Using the Westbrook comparison, the AFL leaders in triple-doubles are Tom Rockliff with 35 times from 208 games at 16.8%, and Brendan Goddard with 33 times from 334 games at 9.9%.

Andkeep in mind that these are the best of the best so we can see the AFL version is much tougher. Of current players Mitch Duncan has achieved it 19 times from 234 games and leads the way – in fact anyone getting close to a triple-double around once in ten games is extremely rare.

So, what type of player does it take to crack the triple-double? Obviously, someone who has a strong propensity to gather the ball is our starting point, which means basically the key midfielders at every club are in the frame, However, then the mark and tackle count filters it out quite a bit. A strong tackling inside bull will pick up the odd triple-double – think Clayton Oliver, Touk Miller or Jack Steele – whilst those who can spread and take the cheap mark in link-up play can rack up double digits there – the likes of Bailey Smith, Andrew Brayshaw, and Lachie Whitfield.

Let us look at who has achieved a triple-double so far this season:

This now leads us to speculate if we will ever see the elusive quad-double of double-digits in all four categories. This has been ach ievedjust six times in AFL history.

By whom you may ask?

Well, here is the definitive list of quad doubles achieved in chronological order:

An amazing blend of inside and outside play achieved by all six of these individuals but, disappointingly, we are approaching seven years since the last one.

So, in anticipation of one occurring again here are my top five predictions of players most likely to join that list and record an elusive quad-double.

But quickly, before we start an honorable mention to two current players who have just missed the quad double in recent years.

Sadly, for both these two, I can’t see them achieving the quad double as both have dropped off in marks and tackles recently.

So here are my top 5 with a quick reason why for each.

No 5 – Jack Steele. The Man of Steele has recorded 10+ tackles eight times in his last 20 matches so tackles are not a worry for him. However, he recorded his first-ever double-digit marks in Round Four this year when he took 10 grabs against Hawthorn, so he just needs to bring the two together now. Last round he had seven marks and six tackles so it’s just another 50% effort on that for him to get there and with St Kilda flying now he just needs that one perfect day to achieve it.

No 4 – Isaac Heeney. Definitely the most surprising player within the top five, but when you think about it neither tackling nor marking is questionable with him as he excels in both. The bigger question mark has been around his ability to get into enough contests to rack up big disposal numbers, but Horse Longmire has given him more runs through the midfield this year. Perhaps it might take an early injury to a teammate for him to get those boosted midfield minutes that will earn him a crack at the quad-double but I’m willing to speculate he can do it if given the chance.

No 3 – Josh Dunkley. A part-time ruckman / forward / midfielder who gathers plenty of ball, bobs up regularly in the right spot for a mark and really knows how to stick a tackle. Dunkley has come closest of the players named in my top five to the quad-double with his Round 5 effort of 9k 14h 9m 7t a testament to his overall game. Given he is just about to reach the 100 game milestone, his best may still be yet to come but will it be this season with the Dogs, or does he need to find a new home such as at Bomber land where no one else seems to tackle so he can fill his boots?

No 2 – Patrick Cripps. The man who carried Carlton for years is now getting the support he needed to become the absolute beast that he is capable of being. Hamstring pending, he looks to have the Brownlow at his mercy, but could he also have a quad-double within his grasp? He is still not afraid to get his hands dirty with 11 tackles against Hawthorn in Round Three evidence of that, and he just needs to use every inch of his 195cm frame to up his marks tally. I feel like he might have that one massive game against a team like North Melbourne, who Carlton meet in Round Seven, to give this thing a big shake.

No 1 – Andrew Brayshaw. With the absence of his role model, Nat Fyfe, young Andy has taken all before him this year as the central pillar to the Fremantle midfield. He has the work rate to match the best with an average of 5.8 marks and 6 tackles a game in 2022 he is certainly within reach of this rare feat. With 80 good games under his belt, I feel like the next 50 are going to be the absolute sweet spot of his career. He just needs one of those opposition coaches who don’t believe in tagging to let him go and if he keeps his tackling game on point then he looks the no 1 most likely player to bring up this most unlikely statistical peak.