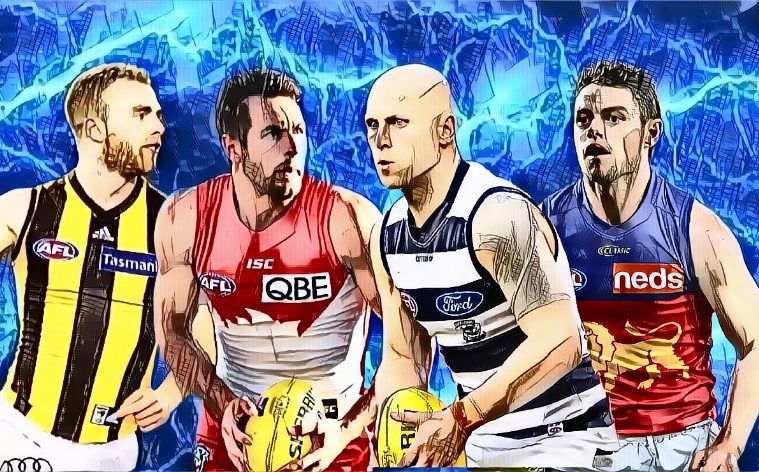 Talking stats can be dangerous. One slip… one incorrect number here or there and people jump down your throat like they have a strange affiliation for phlegm.

Fair enough, too, I suppose. I mean, the numbers are right there to use – all I have to do is add them up, or even read them properly, to begin with, and there should be no problem, right? Then why do I have such problems? Maybe I am the mathematical equivalent to being dyslexic?

Anyway, a way around this is to concoct my own stats, or at least my own combination of stats to form a different one. That way, a slip here or there can be due to creativity, rather than unbridled stupidity. Or at least I can pretend that’s the reason.

And that’s where we find ourselves today – with the unveiling of The Mongrel’s 40-20-10 club.

So, what does it all mean? Well, that’s the easy part. We often see players rack up big numbers through the midfield. We’ve seen Tom Mitchell top 50 touches a record three times. Lachie Neale notched his first and only 50-disposal game in 2019, making him the most recent player to do so, but we often laud certain types of disposals.

But what about when a player combines 40 touches, 20 contested possessions, and ten or more clearances in a single game? How often has that been done, is it the ultimate mark for a truly great inside mid, and who has been the best at it?

Oh, and before you go any further, there are some undoubted stars who will be missing from this list due to the fact that contested possessions and clearances were not recorded for the majority of their careers (Buckley, Ricciuto, Williams, and so on. Disappointing, I know. Particularly when there is complete video of every game since 1990. The AFL and Champion Data could put a bit of work in one off-season and remedy this – would pay proper respect to players who were part of the game before advanced stats became a thing.

Anyway, here are the members of the latest Mongrel Club.

His enormous 2018 carries him through here, with three of the four taking place en route to his Brownlow Medal. Amazingly, none of these came in any of his three 50-disposal games.

Mitchell’s game has changed since his broken leg, forcing him to miss the 2019 season. Since then, he has recorded four games of 40+ disposals, but no games of 10+ clearances, and no games of 20+ contested touches. Given that, chances of him catching Ablett seem a little more remote.

He is the main contender to Ablett’s throne, with the form-line and game style to make a run at it as soon as the 2022 season should he be able to get a clear run at the season.

Had we been playing full games in 2020, he may have been one game closer, as he had 36 touches, 12 clearances and 18 contested possessions in 20% less game time against the Western Bulldogs in Round 11.

I love this bloke – admire the way he has played the game over the last ten years.

JPK is the other man to achieve this feat in a final, racking up 42 touches, ten clearances, and 21 contested possessions as the Swans despatched the Crows. Now in the twilight of his career, Kennedy may have one more 40-20-10 game left in him, as he did manage a massive 42-11-22 game in Round six of 2021.

THE TRIOS OF TERROR

Not many would have picked this one, but Priddis was an absolute warrior for the Eagles, and is probably underappreciated by those outside Western Australia.

I have to say… I expected him to feature more prominently, but I guess with Fyfe, it is as much about quality as it is about quantity.

Fyfe’s chances to notch another 40-20-10 game may be taking a hit, with Freo possibly playing him more forward in 2022 (personally, I’d play him at half back and have him drift through the middle… but that’s a story for another time).

Very close quite a few times, but he got the job done twice, and given the Cats have their forward targets settled, may very well have 12 months to notch another as a result.

Underrated when people talk about the great mids – even with a Brownlow to show for his efforts.

Swan was a beast in the middle, notching 40+ disposals on 13 occasions, with his most complete games coming as part of his 40-20-10 efforts.

Only had 40+ three times, but two of those outings have been monstrous, with the third seeing him fall short of the 40-20-10 mark by just two contested touches.

Another underrated star in his day, Rockliff was a monster at stoppages and rarely met a contest he did not want to crack into.

An accumulator by nature, Macrae is not your regular outside runner. Whilst many would have thought his captain would have made the list, it is Macrae doing the hard yards to notch two additions to the club.

Note – Massive thanks to Reddit user u/billskelton who filled some gaps for me. Much obliged.

No Cripps? No Bont? No Judd? No Cunnington? No Sloane? No Cousins?

Yep, none of them ever hit the 40-disposal mark in their career, let alone put these three stats together. I was pretty surprised by that in regard to a few of them, as well.

Christian Petracca missed on joining the club, and also missed being the only man to top the 40-20-10 milestone in a Grand Final. His 39-11-24 game will go down as one of the better GF performances in history.

There’ll be more than this, as I wasn’t really looking for those who almost achieved it.

Patrick Cripps missed by one disposal in his career-high disposals game in Round 19, 2019.

Gaz Jr missed extending his lead by one contested possession on one occasion in Round 17, 2017, whilst Jack Macrae fell short of becoming a two-time member by the same margin in Round 7, 2018.

Matthew Boyd narrowly missed adding two more to his total, with a miss by one contested touch in Round 19, 2011, and again in Round 7, 2012. He was an incredible player.

As always, if I have missed one, my apologies. Let me know and I’ll add him. It’s never fun when someone throws something back in your face, though, so if you’re going to let me know, do it nicely, eh?