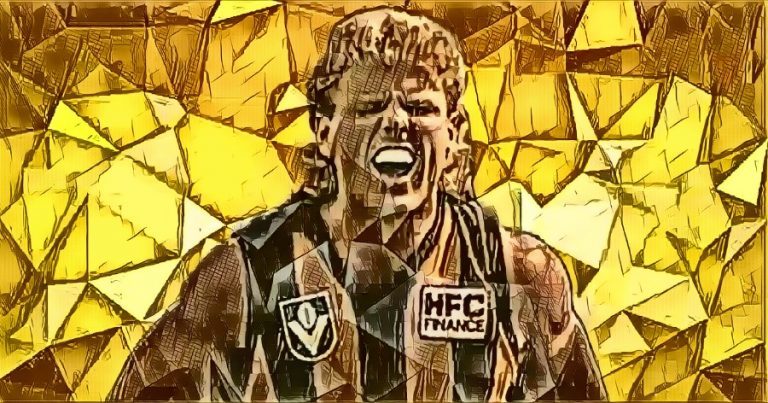 I was always more inclined to barrack for the bad guy. I remember being initially horrified as Darth Vader cut down Obi Wan Kenobi when my father took me to the cinema to see Star Wars. We lined up around the block and waited for hours to see that damn movie. However, when I got home, I was chopping down pretend Kenobis left right and centre with whatever could double as a lightsaber.

What was Kenobi doing standing there like that, just letting Vader cut him down? I found myself thinking I would’ve done the same thing – you don’t pass up the opportunity to get a free hit!

The kids at my school were all about Luke Skywalker – he was the hero, after all, but I preferred Han Solo. More than that, I preferred Darth Vader over Solo. I guess it’s why I like The Empire Strikes Back the best of all the Star Wars movies.

Fast forward eight years or so and the world (or my world, at least) was in the grip of Wrestlemania. I was a little older and not much wiser when Hulk Hogan and Mr T headlined the main event, taking on Rowdy Roddy Piper (RIP Hot Rod) and Mr Wonderful Paul Orndorff. Well, I reckon I was the only kid in my school that wanted Orndorff to beat the shit out of Hogan and T. Alas, it never happened.

I have always liked a good villain. Hans Gruber in Die Hard, or basically any evil characters Alan Rickman played were wonderful – he was great as the Sheriff of Nottingham. I liked Severus Snape before he was revealed as a reluctant hero. I wanted Sylvester the Cat to eat Tweety Bird. I wanted Daffy Duck to get one over Bugs Bunny, and I wanted Dick Dastardly to finally win one of the Wacky Races! When I was a kid I had a comic where the Coyote finally caught the Road Runner… and I loved it! He even had the bird in a pot ready to eat him – I wish I could find that somewhere.

They say nice guys finish last, but there are so many stories of good guys getting the rewards. It makes for a good story, doesn’t it? But what about when the villains win? And what about when they do so at the expense of the good guys? Do you cheer? Do you revel in the fact the person with a bit of mongrel in them has scrapped to the top of the heap?

In this series, The Mongrel has been taking a look at some of the biggest bad boys our sport has seen – not the ridiculously silly bad boys like Mark Jackson or Robbie Muir who were better known for going the knuckle than for their footballing ability; I’m talking about the blokes who talked the talk, then walked the walk to back it up.

There are the guys who may have rubbed you the wrong way several times, but you cannot deny their greatness.

“It may have happened to someone in your family, but today someone has a loaded gun and it’s pointed at your head. How do you respond?”

Those were the words the late, great Alan Jeans levelled at his star centre-half-forward before the game of footy that would be the last under the VFL banner. Brereton later admitted that Jeans’ challenge had angered him, that he felt his coach was using knowledge about Brereton’s family and laying it bare in front of the team. When he ran out onto the MCG to partake in what many believe to be the greatest game ever played – the 1989 Grand Final – Derm’s blood was boiling.

And he’d soon be cooled off, courtesy of Mark Yeates.

But the Brereton story goes back way before those fateful moments at the start of the 1989 Granny. After kicking five goals on debut in the 1982 semi-final against North Melbourne, Brereton came back to earth with a thud, collecting just three touches in a preliminary final loss to Carlton. The young Brereton was at that point known as “The Kid”, stemming from a threat from then reserves coach, Des Meagher to another player that if he didn’t get a kick, he’d “put the kid on”. Yep, he didn’t know his name.

But he soon would, and so would the football world.

Brereton embarked on a storeyed career that would see him eventually don red and white, then black and white after an acrimonious split from the Hawks. For all the high (and there were plenty of them), there were quite a few lows. Brereton’s temper and his penchant for walking a little close to the edge of football legality, saw him suspended for thirty games over the course of his career.

Some of the publicised of Brereton’s  reports include the following

– a four-week stint on the sidelines for clubbing Garry Lyon to the back of the head after Lyon marked in front of him in 1990. Should have been given a medal.
– a six-match suspension for knocking St Kilda’s Danny Frawley unconscious behind the play in 1988.
– Three separate charges from the 1985 Grand Final where he also happened to kick eight goals in a side that was belted.
– A five-week holiday for knocking out Adelaide captain, Chris McDermott in the Crows’ debut game in the AFL, in 1991.
– A seven-week suspension for stepping on the head of young Hawk Rayden Tallis in 1994.

But it wasn’t just the suspensions that raised the ire of opposition fans. Sure Derm was throwing his weight around illegally at times, but he was also doing plenty of it legally. His hit on Mark Yeates in Round Nine, 1989 damaged one of the Geelong wingman’s testicles as Brereton crashed into him at a boundary throw-in, leaving Yeates writhing in pain and having to be stretchered off. As he left the ground, Derm was right there to let him know all about it.

“I just walked alongside (the stretcher), and badmouthed him. We did stuff like that in those days.”

He also lay what the Herald-Sun termed the “perfect hip and shoulder” in the second semi-final at Waverley against the Bombers. It was Paul Vander Haar on the end of that one… not that he’d remember much of it. It was one of many big, fair bumps that Brereton levelled in throughout his playing career.

Here’s another against North Melbourne in 1991

Not many remember the other incidents in that semi-final. Brereton had Darren ‘Daisy’ Williams down and in pain after a crunching tackle, and a roundhouse swing at Tim Watson in a contest was probably lucky it didn’t connect for all involved – that one was a definite holiday from Derm had it connected, and Watson may have been in need to re-attach his head to his body.

Here are the Williams and Watson clashes

He ran through huddles at three-quarter time, kissed opposition players on the lips and went nose-to-nose with umpires. In an age when players still had personalities, Brereton had the biggest of them all, and for a man so used to walking the fine line between what was legal on the footy field, and what wasn’t, he tipped over into dangerous territory quite often.

But it wasn’t all just physical stuff that Brereton used to get under the skin of opponents. His racial insults directed at both West Coast’s Chris Lewis during the 1991 Grand Final, and St Kilda’s Nicky Winmar in 1990 are not commonly spoken about these days. Both times his verbal attacks prompted violent responses from the Indigenous players. Brereton regrets his actions now and has publically apologised to both players listed above as well as Winmar’s St Kilda teammate, Russell Jeffrey – those moments are a blight on a career littered with moments many could point to as unsavoury. In a time when the game was more physical, it is interesting that Brereton has not apologised for knocking players unconscious – he has felt regret for his words over his actions.

He was booed relentlessly at points – I can remember watching him warming up before a Collingwood game in 1990 and the Magpie faithful were especially vocal as Brereton darted back and forth before the bounce in front of them.

Some of the worst crowd interaction came in Western Australia, and in one particularly disturbing incident in the 1991 Qualifying Final, the West Australian crowd cheered as Brereton rolled awkwardly on his knee and had to be helped from the ground. This is also something that would not fly in this day and age – in Toronto just a couple of years back, the crowd was chastised not only by media, but by players on the court as they cheered when the Golden State Warriors star, Kevin Durant injured his Achilles tendon in his comeback game. The Eagles fans did themselves a disservice the day they cheered Brereton’s injury. He would have the last laugh that season – after a season where the Eagles dominated, the Hawks were able to roll them on their home turf – it remains one of the best Hawthorn wins of all time. They were then able to repeat the dose in the Grand Final.

The West was also where he was introduced to the hip and shoulder of John Worsfold, as the Eagles’ hard man put Derm on his backside on the boundary with a crunching bump. As was the Brereton way, it stunned him – it could’ve stunned a bull elephant – but he pulled himself to his feet. He got up.

And so we head back to the moment in the 1989 Grand Final.

Down and unable to draw breath, Brereton was in huge trouble. Shots from the Hawthorn coaching box displayed an uncommon image – Alan Jeans standing, pointing, and looking very concerned. The hit sent shockwaves through the stadium and the body of Brereton simultaneously and many wondered how the Hawks would recover from this blow. The loss of Brereton could very well be the catalyst for a Geelong premiership. With just two players on the bench, the disadvantage would have been too great, particularly given the toll of other injuries on the day.

But Brereton refused to yield.

His body screamed for him to stay down.

But he got up.

The trainer pleaded with him to come off.

He refused. he would not be beaten like that.

Retreating to the forward pocket, he vomited on the way as his system railed against him. He should’ve gone off to be treated. Of course he should’ve.

And of course he didn’t.

Minutes later, on a long ball into the Hawks’ forward line, Brereton had his chance to make a difference. Eyes only for the footy, he backed into a contest and took a strong mark above his head – once again leaving himself wide open had a Geelong player wanted to make him pay. He goaled and the Hawks were away – how can you not respect that? In one fell swoop, the villain become a hero.

Make no mistake, Dermott Brereton was a bad man to be on the wrong side of on the field in his day. He revelled in the pain he could inflict on an opponent, and by proxy, the supporters of the opposition. He was ruthless, aggressive and calculated, yet at the end of the day, he’d be there with a smile and a handshake for the opposition, accompanied with a knock-about nature that made it almost impossible to dislike him for long.

He is not everyone’s cup of tea, but he is one of the greatest centre half forwards the game has seen. A villain in his day, he has made the transition to TV better than most.

He may be the good guy now, but he is still one of the greatest villains the game has seen. Just ask any Essendon supporter over 40 years old. They’ll tell you.