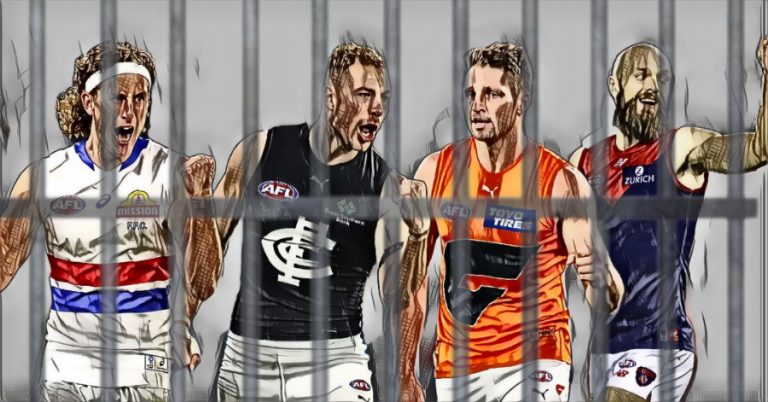 The 2022 Mongrel Punt “Get out of Jail” Marking Champion

After 23 Rounds, we’ve come to the end of one of the more… interesting exploits I’ve undertaken at The Mongrel Punt.

Allow me to explain.

Earlier this year, I was watching some older games for research on an article that I never ended up writing – maybe I’ll do it after this season. Anyway, in one of the games, Wayne Carey flew at a footy and clunked a big mark on the wing. At that point of the game, Essendon had really locked North in their own defensive half and had multiple repeat inside 50s as a result. Once Carey hit this pack and clunked the mark, North were able to slingshot forward and kick a goal against the flow.

Not much was made of that mark from Carey – I mean, it was something he was doing on a weekly basis in the mid-nineties, wasn’t it? However, in retrospect, seeing him take that mark broke the Essendon zone defence and allowed North to run hard forward as a result – it was a Pagan’s Paddock-type setup, but this time it was Carey initiating it as opposed to being isolated inside 50, running back to goal.

I stopped and watched the passage again to see if there were any other players responsible for the play – nope. It was Carey taking a mark from a pressured kick, beating two opponents in the process, and it was his action that broke the game open. I remember thinking “he dragged them out of jail” with that mark.

Thus, the “Get out of Jail” mark, or GooJ mark was born. Cool story, huh?

Okay, so thanks for the completely unnecessary nostalgia, HB… how about you dial it back a bit and give us the results?

Coming into the 2022 season, I decided to apply the GooJ mark criteria to the games I was reviewing. Only, that wasn’t really fair, was it – I kind of had to see every game in order to get a complete picture as to who was best in the league at it.

And so, in a move that has caused quite a few moments of consternation at Casa Del Mongrel, I made the decision to watch every game and record every GooJ mark in order to make this accurate.

Yes, Mrs Mongrel has reminded me of my stupidity several times since.

Despite the dirty looks and sometimes dirty comments – bum chika wow wow – I persevered and glued my eyes to the TV to cover every game.

The end result is a comprehensive list of the players that bailed their team out of trouble and provided the best marking targets to aid in breaking down defensive walls. I have to say the results surprised me.

Uh oh… another Mongrel Paywall. Don’t you hate that? There will be several of these columns in the lead-up to the finals, and several more during and post-finals. Mongrel Members also get access to HB’s finals reviews early. Wanna join them and support the best damn independent footy site you’ll find?