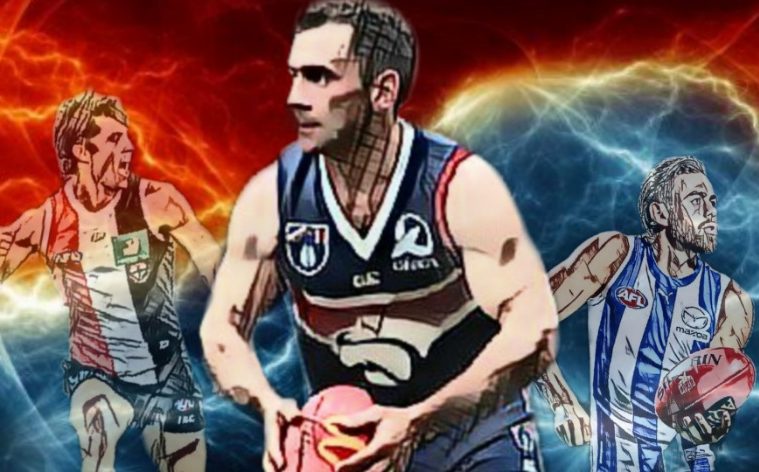 The Greatest Tackler The Game Has Seen?

This afternoon, I will be releasing the first article in a three-part series detailing how tackling in the current game is being adjudicated incorrectly. I’ve compiled a heap of data from Round Five to Eight, watching every game and taking note of every holding the ball decision paid.

It has been eye-opening, to say the least. Until then, here is a piece about arguably the greatest tackler the game has ever seen.

I’ll start this off with a simple yes/no question. That way, if you’re not interested, you can finish reading the article right after you come to your non-evidence-based conclusion.

Is Tony Liberatore the best tackler the game has seen?

And immediately, I feel Richmond fans bristling at the mere mention of his name. Visions of a bloodied Matthew Knights leaving the MCG whilst Wayne Campbell remonstrates with “Libba” come flooding back. Their eyes bug out, their faces turn a shade of crimson, and their fists clench.

Yes, Libba has that type of effect on a supporter – particularly Richmond supporters – did then, and can still ruffle feathers now.

Whilst I readily agree that some of his tactics later in his career were… questionable, the fact remains that this little wonder of Aussie Rules Football not only changed the way midfielders play the game, but was the precursor to the tackle-fest we see in games right now. No… I’m not talking about clips from the changerooms after the game – that’s a completely different type of tackle-fest. I am talking about the sheer volume of tackles we see in the modern game.

Whilst many have surpassed the numbers compiled by Liberatore in his best tackling season, it remains one of the most singularly impressive outputs in history. I’ll get to why very soon.

Before we get to Libba’s performance(s), we need to look at the modern-day players who excel in the art of tackling.

In 2021, we saw two incredible efforts, with two players claiming the two highest averages for tackles per game in the history of the game. Hugh Greenwood looked to en route to breaking the record for most tackles in a season. He was going to give it a shake had he been able to stay healthy. Averaging an incredible 8.67 tackles per game – the highest in history- the season record of Scott Selwood (202 tackles at an average of 8.02) was in jeopardy until he injured his knee and spent the rest of the season on the sidelines.

In his absence, Jack Steele surged to the front, recording 185 tackles for the year, at an average of 8.41 for the Saints. This placed him in seventh place, all-time for single-season totals. He is again the best in the game for laying tackles this season, with 6.8 per game, level with Luke Shuey on averages, but having played twice as many games.

Greenwood’s 2021 average would have clocked him in at 190 tackles for the year had he continued at the rate he was travelling at prior to his injury, which would have still placed him behind Selwood’s record of 202, but he would have achieved his totals in three fewer games. One big week amongst the remaining games could have seen him go very close to claiming the highest season total recorded

Those types of figures from Greenwood and Steele kind of dwarf the efforts of Libba… no pun intended, but are they simply inflated figures that reflect the way the game has changed over the last 25 years, rather than the outstanding achievements they appear to be at face value? I’m contending that this is very much the case, particularly when viewed besides Liberatore’s efforts.

Greenwood and Steele both had enormous impacts on the defensive side of their team’s games. The Saints averaged 61.95 tackles per game in 2021. Steele’s 8.41 tackles per game amount to 13.57% of his team’s tackles – an outstanding effort. With 23 players on the team any given week, one bloke had over 13% of their collective tackles. Makes you wonder what the rest of the team were doing when they were without the footy, huh?

Greenwood was slightly better, making up 13.96% of the average tackles the Suns compiled a game. He carried the defensive side of the Gold Coast midfield, and though they have compensated for his absence by adding Charlie Constable for 2022, his loss will be huge when it comes to toughness in the contest. He has never once averaged under six tackles per game. Think about that – his worst season still amounts to a higher tackling average than the best from Libba. Incredible…

And before we look at Libba, let’s have a look at some of the great tacklers in the period in between.

Lenny Hayes averaged 10% of the 2010 St Kilda team’s tackles. The Saints averaged 70.19 tackles per game when they went perilously close to the flag. Hayes had 7.08 per game top lead them.

Jude Bolton was a monster in Sydney, relishing the chance to drag an opponent down whenever the opportunity arose. He averaged 7.05 tackles per game in 2009. That’s 10.53% of the Swans’ tackle totals.

And now we get to Libba. Buckle up, babies.

Libba’s best tackling season, as mentioned, was 1994. He amassed 142 tackles – a pittance by modern standards, right? How about if I tell you that the entire Footscray team had 625 tackles in total? Got your calculators out?

In 1994, before tackling was in vogue, Tony Liberatore averaged an incredible 22.73% of his team’s tackles. In a time people laud as being the best footy they can remember, little Libba was in the process of demonstrating the value of tackling when everyone else was trying to pick up a cheap kick. Darren Jarman was next best in ‘94 for Hawthorn. He had 83 tackles for the year, or 10.7% of the Hawks’ total tackles.

So, is Tony Liberatore the greatest tackler the game has seen?

If we’re going by sheer tackling numbers, the answer is no, but the question is not as simple as that. What Libba did came at a time when nobody else was even close. When it came to tackling through the early to mid-90s, he simply had no peer.

Although players and the game have evolved, no one has put the type of distance between himself and the next-best player in the way Libba did in 1994 and the years surrounding it. To have consecutive seasons where you average over 20% of your team’s total tackling numbers is ridiculous.

If you want to argue the case against it, I am all ears, but I have never seen a player better at tackling than Tony Liberatore, despite the fact modern stats will tell you current players are doing it better. If Libba were getting a game now, disregarding that he had trouble kicking the footy over a jam jar, how many tackles per game would he pick up?

Double figures would be a given.

Oh, and though he reaches nowhere near those numbers now, it is somewhat gratifying to see a Liberatore own the most tackles in a single AFL game, even if it is Tom*. The apple doesn’t fall far from the tree.

*Tom Liberatore had 19 tackles in a game in Round 8, 2016. He co-holds the single-game record with Jude Bolton (R3, 2011), and Jack Ziebell (R3, 2016). Interestingly, two of the three highest recorded came against Melbourne in the same season – 2016. The Dees really needed to hit the gym back then. Nice to see they’ve progressed just a tad, huh?