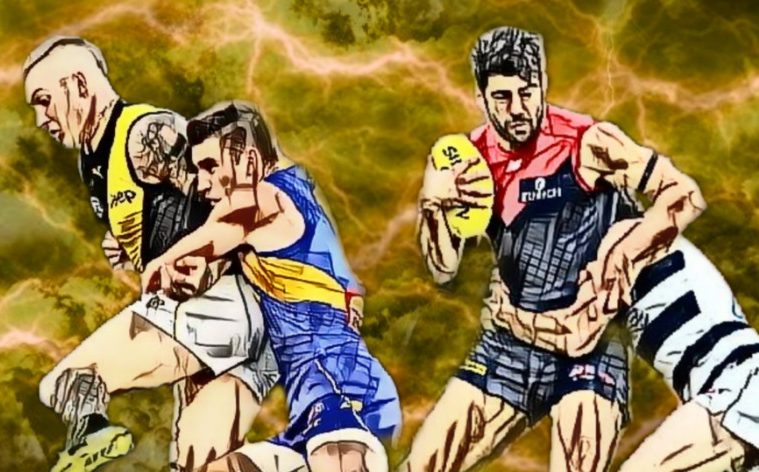 Why Bother Tackling – What Does The Data Tell Us?

Have I got a treat for you guys!

Well, maybe… I guess we’ll see. I don’t want to over-promise and under-deliver. Lord knows… there are several women in my past that can attest to that occurring on a semi-regular basis.

Speaking of tackle… or more to the point, “tackling”, it has been a source of frustration for me over the first eight rounds of the season. You see, I love this aspect of our great game. I love watching someone lay a perfect tackle, drag an opponent down, and then… it all kind of falls apart as the umpire finds one of about a dozen ways to give the ball-carrier the benefit of the doubt and either call play-on, or call for a stoppage, or give him a free-kick for some aspect of the tackle being slightly incorrect.

It has annoyed me so much that I made a decision that almost drove me insane over the past four weeks. I would watch every single game, beginning to end, and note every free-kick that was paid for holding the ball, or incorrect disposal as a result of a tackle.

Mmmmm, I thought so, too. But as my eyes started to hang out of my head by week three, and Mrs Mongrel started to side-eye me a little more, I started to feel as though this may not have been as good an idea as I thought it was. Still, I was committed, so we got to the end of Round Eight and I had four weeks of tackling data at my fingertips. Still a relatively small sample size, and part of me wishes I started this at the commencement of the season, but… ya work with what ya got, right?

With this data I’ve collected, I’ll be producing a couple of columns. In this one, I look at the teams who are rewarded most with holding the ball decisions, and those who are genuinely robbed on a regular basis.

Later, I will also look at the players who are the most successful tacklers in the game – not the blokes who lay the most tackles; that crappy stat is available at the AFL website for anyone with half a brain (and really, you’d have to have half a brain if you use the AFL website as your main source of info pertaining to the league – go to AFLTables or Footywire – they’re great). I don’t care about blokes who tackle to win stoppages – I care about those who tackle so well that the umpires cannot help but pay them a free-kick.

Oh yes, much to get through with this.

Paywall… what a pain, right? Well, it is how we survive and keep the page clean of gambling ads. Yeah, that’s right – we don’t just talk about how bad they are, we just don’t accept their coin. This article is the fifth of six… maybe seven members’ articles this week. You can access this, additional exclusive columns, and get the game reviews from HB earlier than everyone else by becoming a Mongrel Member. Plus, you help us grow.