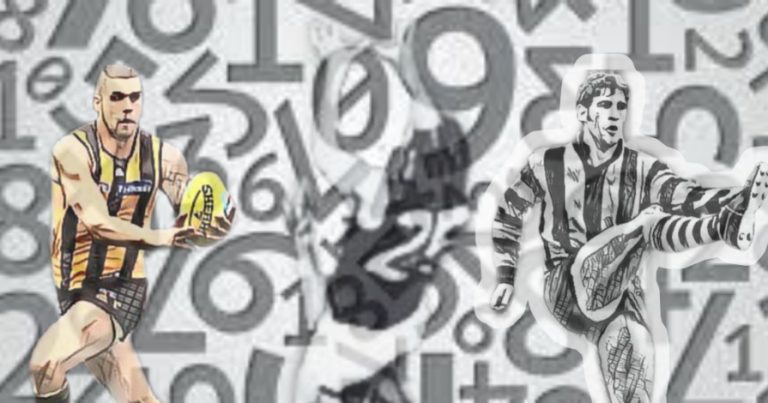 Welcome to the first of hopefully many regular contributions to The Mongrel Punt. If you have clicked looking for something a bit different, then perhaps you have come to the right place – as the founder of the Facebook page Useless AFL Stats I like to do things a bit differently. If you have a penchant for the slightly weird, bizarre and with a nod to historical events but of course always in an AFL context then strap yourself in and enjoy the ride.

So, what is Scorigami you may ask? Well, I was first introduced to the concept by a fellow admin over at UAS with a link to a video hosted by the legendary NFL analyst, Jon Bois.
You can check this amazing piece of work out at Scorigami: Final Scores that Have NEVER Happened Before | NFL Films Presents

In the NFL context, Scorigami refers to two teams’ final scores for a game. So naturally, we looked at that in an AFL context but instead of two teams’ final points total, we decided to apply it for individual team scores in terms of goals and points, which for at least us anyway resonates more with our unique scoring system.

If you were watching the Sydney v Kangaroos game on Saturday at three quarter time North Melbourne were 11.1.67 and on the verge of a new Scorigami, they had options galore to create one. They ended on 12.3.75 which unfortunately has been done seven other times. Had they kicked a bit straighter in that last quarter, a 14.1.85 would have seen them still lose but at least they would have created a Scorigami, they could have also done so with 15.1, 16.1, 16.2, 17.1, 17.2 and plenty more, even 19.4 would have got them there.

Given 16,019 games of AFL have been played and therefore 32,038 individual scores recorded you would be right in thinking plenty of combinations have been covered, but every now and then a Scorigami will pop up.

In Round Six, 2021 the Adelaide Crows score of 16.3.99 is the most recent and the 747th different AFL score ever recorded. It was the first new score since Fremantle kicked 10.1.61 in Round 9, 2020 when defeating Collingwood. And yes, you would be right in thinking that for a Scorigami to occur a team needs to be either extremely accurate or extremely inaccurate, so let’s look at my top five most unique Scorigami’s of all time and how they occurred.

Hawthorn’s 7.0.42 is the most goals ever kicked by a team without registering a behind. Pretty amazing when you think the whole aim of the game is to kick it between the big sticks yet so many players struggle to do it with any regularity.

There is not a lot known about this game which was played at Glenferrie Oval but interestingly, Hawthorn came into it as winners beating St Kilda by eight points, yet Essendon had lost by 95 pts to Geelong. By the end of the season, Hawthorn claimed the wooden spoon with just one more victory whilst Essendon would go on to win another nine straight matches including two finals and the Grand Final by 73 points.

A fun fact is that Hawthorn have never won a game after not having kicked a behind at halftime, which has occurred just five times. In fact, being behind less at half time is not a good omen as rarely does a team win in this situation at just 20.3% with the overall record being 31 wins 3 draws and 119 losses. Even the aforementioned Adelaide Crows score of 16.3 which saw them at 14.0 and with a 25 point halftime lead resulted in a loss as they were overrun by Hawthorn to the tune of three points.

An amazing scoreline with the Hawks notching up 66 scoring shots but incredibly wasteful with a record 41 behinds. The next highest ever record is still an impressive 35 but pales in comparison to this effort with the second most scoring shots being 60 (we will get to that one later).

Incredibly, 13 Hawthorn players kicked a behind that day with just two rushed behinds on the score sheet. 1977 is the only V/AFL season where two players from the same team have combined for 200 goals with Peter Hudson kicking 110 and Leigh Matthews 91. In this particular game they kicked 7.4 and 4.5 respectively whilst the biggest culprits in the points scoring spree were Bernie Jones 1.4 along with Alan Martello and Michael Tuck who both kicked 1.3.

Sadly, for Hawthorn in an incredible year they were beaten in the Preliminary Final by the eventual premiers, North Melbourne by 67 points. St Kilda on other hand won the wooden spoon for the 19th time.

Which score is the Scorigami you may ask? In a near rare feat of a double Scorigami the North Melbourne score of 8.1.49 had already been recorded once before, in the very first season of 1897 by Essendon. However, some 82 seasons later, it is yet to be repeated.

The score of 12.34.106 is easily the rarest of the ways to make up that score, next time you see the final score of 106 have a little drink to celebrate as it will be the 300th time it has occurred.

Melbourne had entered the match after a surprise defeat to Hawthorn but easily demolished North Melbourne on this day at Ardent Street. Whilst there is no official record of all the behinds scored it is documented that Norm Smith was chief offender in front of goal, kicking 4.11. The match was played in rain and with a strong crosswind that concentrated play along one wing and led to Melbourne’s inaccuracy. The game fizzled into a one-sided affair and in the last quarter after Melbourne had kicked nine-straight behinds. The Bronx-cheers rang out in the crowd when Alby Rodda finally registered another major.

This match set a then-record total of behinds for a team and the largest gap between teams for behinds of 33, subsequently passed by 25.41 of Hawthorn and 34 behind gap over St Kilda on the day covered above.

Another amazing scoreline and the pinnacle of inaccuracy costing you the game, something I’m sure Western Bulldogs fans could relate to right about now. The 83-point margin is a staggering 26 points more than the next biggest loss recorded by a team with more scoring shots than their opponent which was Melbourne 6.22.57 to Carlton 18.7.115 in Round 14 1976.

So, what happened on that day out at Corio Oval, as the home side romped to victory? According to newspaper reports, Fitzroy hit the post five times and they scored their second goal in time-on of the last quarter. At the time it was Fitzroy’s greatest ever loss eclipsing a previous 78 point loss to Carlton in Round 7 1907. Surprisingly, Fitzroy, who were winless to this stage of the season, recovered to win seven of their next 12 whilst the Cats won just three more games for the year to finish below them on the ladder.

If you are reading this on the date of publication then it’s exactly 53 years since this match was played.

However, back to the Scorigami of 30.30.210 which is the highest scoring parity ever recorded between goals and behinds well ahead of 25.25.175 which has occurred twice, the last time by Geelong in 1992 over Fitzroy who kicked 11.11.77, incidentally is the largest combined score when both teams have had goal/behind parity.

The experience of unfurling the 1968 Premiership flag in front of its home ground at Princes Park no doubt inspired the Carlton players as they went on a scoring spree against Hawthorn. Many media pundits had labelled the match as a danger game for the Blues as the Hawks had recorded an impressive 22 point victory in Round One over Collingwood, whilst Carlton had scrambled home by three points against St Kilda.

Hawthorn also had the imposing presence of Peter Hudson at full forward who had kicked 125 goals the year before, and although the mercurial forward had a hard time getting get much ball this match, he still kicked four goals from seven disposals. Carlton full-back Wes Lofts was reported for striking Hudson and received four weeks – it was one of many willing clashes on the day in what was a regular occurrence for matches in that day and age.

Up forward the Carlton big men put the Hawks to the sword. Back up ruckman Peter ‘Percy’ Jones kicked 7.3 whilst Alex Jesaulenko had a field day, dominating around the goal-front. However, his kicking for goal was inexplicably wayward, and he was to end the day with a personal tally of 6.12. The 12 individual behinds still an AFL record for a player with only Lance Franklin’s 2.11 in Round 21 2007 getting close in recent years.

Wingman Ian Robertson lined up a shot on goal just as the final siren sounded – and kicked truly to register the Blues 30th major. In 125 years of AFL games, 30 goals have been kicked 19 times and 30 behinds have been kicked 42 times but this was the only time a team achieved both. It still stands as Carlton’s highest ever score.