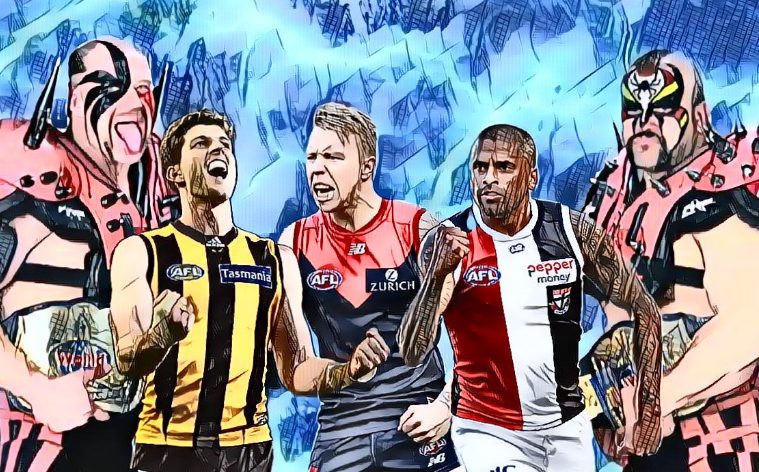 The Road Warrior Ladder – Round Four

Well, I waited four weeks to get this one started again. It made a little more sense to have a month of footy before we started looking at niche ladders…

The Road Warrior Ladder is named after one of the best Tag Teams of all-time. Don’t come at me with your Demolition garbage, or your Powers of Pain crap… they were Road Warrior rip-offs… who were, I suppose, rip-offs of the 1980s movie, Mad Max.

Anyway, you get four points for an interstate win and two points for a win at an away venue that IS NOT played at the venue considered your home ground. I don’t care if it’s not your home game – you’re still at the ground you play your home games at. The Road Warrior Ladder Nazi isn’t concerned with your feelings.

THE ROAD WARRIOR LADDER AFTER ROUND FOUR

Well, the Dees are on top of the AFL Ladder and they debut as the front-runners in the Road Warrior Ladder as well, picking up two wins interstate in the first four weeks, knocking over Port and Gold Coast. Did you expect something different?

So, plenty of potential movement for Round Five. No two-point games this week, as the Cats still have that horrible little situation where they can be forced to play home games at the MCG, so they don’t get the chance to pick up any points against the Hawks. Yeah, yeah… a cat-spiracy, right?

Wrestling note of the week – Big Van Vader was posthumously inducted into the WWE Hall of Fame a couple of weeks ago. Mick Foley campaigned for Vader to be inducted a couple of years ago before his death, knowing that Vader was unwell and wanting the WWE to do the right thing and put the big man before he passed away.

They didn’t, even though he was far better-credentialed than 80% of the guys in there at the time.