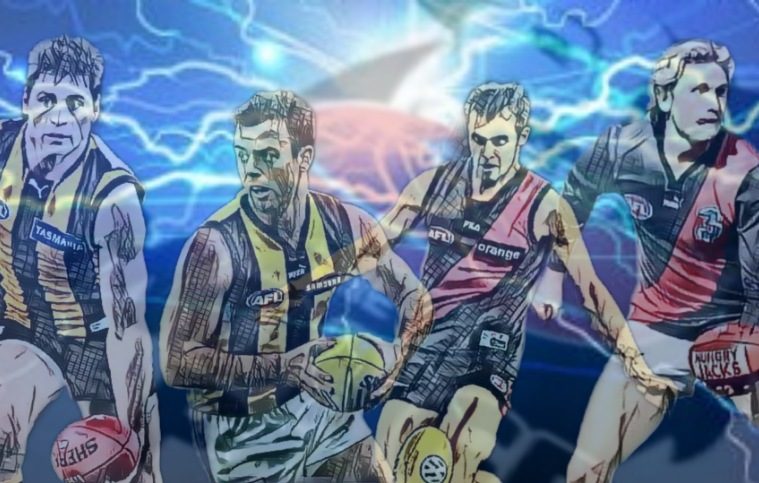 Welcome ladies, gentlemen and all others inclusive to the first instalment of Mongrel’s Mighty Moments. A little column where I take a deep dive back through the history books and reminisce on some of the forgotten moments throughout the vast history of our great game.

Whether it’s a heartwarming tale, a controversial decision or just a trip down memory lane, I bring to you some of the greatest stories that aren’t quite etched in the annals of your everyday footy fan’s memory, but still live on in folklore.

Our first flashback comes on the back of two teams that still absolutely hate each other to this day, and a controversial decision that many who played that day still look back on acrimoniously. It was the day that Hawthorn’s Daniel Harford climbed the goalpost as a form of protest against goal umpire, Steve Stirling who had just awarded Essendon’s Justin Blumfield a goal after it was alleged that the ball had hit the post on its way through.

Allow me to set the scene; the year was 1998, and it was a cold Saturday afternoon on the second last day of May. Two teams took to the field at Waverley Park for a rare Saturday twilight match in front of a reasonable showing, just shy of 42,000 fans, back when Waverley would comfortably house around 72,000 patrons. It was Round 10 of the home and away season and Hawthorn, who had lost five of their first six matches, were coming into this clash against their old enemy fresh off back-to-back losses to both Footscray and Sydney.

The Bombers hadn’t had their best start to the season either, they were sitting on four wins, five losses but had entered the game off a seven-day break, having easily accounted for both Brisbane and Melbourne at the MCG over the past fortnight. Both teams were stuck outside the top eight and looking for a way to steer their seasons back on track. A win to the Bombers would see them jump back inside the eight.

In game number 100 of the 400 that he would go on to play, Essendon legend Dustin Fletcher was one of the multiple defenders who began their day being set the arduous task of playing one-out with Jason Dunstall – the superhuman Hawthorn full forward who had kicked 1,236 career goals leading into this game, and would leave the field that day having kicked 1,245. That’s right, a lazy nine-goal day for Jason Dunstall, who would only kick a further nine goals across five more games in season 1998 before retiring at season’s end. Imagine that? Who was the last player in the AFL to kick nine goals in a losing side? But we’ll get to the result of this game later.

The game started off heavily dominated by the Bombers and their classy ball movement. Shane Crawford spent the day running with and curbing the influence of James Hird, whilst Blake Caracella played a leading hand role out of the midfield and helped feed blokes like Damien Hardwick and Joe Misiti the ball. The first goal of the game saw Matthew Lloyd gather the ball as it went through the hands of James Hird and three Hawthorn defenders, running into an open goal. Both midfields would bear witness to a herculean ruck battle between former Bomber, Paul Salmon and Steven Alessio, who would surprisingly take the cake as the dominant ruckman on the day, kicking 2.2 and really hammering into the champion Hawthorn ruckman at every opportunity. By quarter time the Bombers lead by 20 points thanks to goals from Matthew Lloyd (2), Scott Lucas, David Calthorpe and Steven Alessio, with the scoreline reading Essendon 5.4.34 – Hawthorn 2.2.14.

The Hawks came out firing in the second quarter after a rev-up from coach Ken Judge, kicking the first three goals of the quarter to get back within three points of the Bombers who had missed three early shots on goal and finished the quarter scoring only a single goal from the boot of David Calthorpe, and four behinds. Shane Crawford and Daniel Chick both held a strong influence on the game during the second quarter whilst Jason Dunstall continued his goal-kicking onslaught. With Hawthorn closing the margin back to only eight points at half time. Essendon 6.8.44 – Hawthorn 5.6.36.

The third quarter saw a number of Bombers players lift, including Blake Caracella who would go on to have a massive second half and finish as the Bombers best player for the day. Steven Alessio continued to prove a problem for the Hawks up forward as he scored his second goal on Paul Salmon to extend their lead. Angelo Lekkas kicked a strong goal to bring the margin back within a couple of kicks, only to cough the ball up in the centre at the next bounce which lead to another Scott Lucas goal and gave his Bombers a 16-point lead going into the final quarter. Essendon 9.12.66 – Hawthorn 7.8.50.

Now, this is where the game really starts to heat up.

Thanks to the monster effort of Jason Dunstall, the Hawks would kick the first three goals in the last quarter to draw level with the Bombers, until Daniel Chick’s undisciplined tackle on Scott Lucas after he had marked the ball in the centre square, gifted the Bombers a 50-metre penalty and gave Lucas his third goal of the game, and a six-point lead back. Paul Salmon started to win more and more clearances in the last quarter which aided the Hawks in kicking the next two goals and gave them back a lead of six points. Damien Hardwick and Joe Misiti both capped off brilliant days by running amok in the last quarter, as a goal from Sean Denham drew the scores level on 80 apiece with five minutes left in the term.

As the game drew towards an end, a “Hail Mary” kick out of fullback from Angelo Lekkas hit Matthew Lloyd lace out in the centre square, a quick pass over to Darren Bewick who had space in front of him sent the Sherrin inside 50 to be marked by Dustin Fletcher, who goaled in his 100th game to give the Bombers a seven point lead with only a few minutes left on the clock. This is where we get to the great crescendo.

The ball is thrown in on the half-back flank for the Hawks, Paul Salmon gets the tap clear out the back where it’s won by Richard Taylor. A turnover lands in the hands of Darren Bewick, a flick pass sees the ball in the hands of Matthew Lloyd who kicks long and high inside the Bombers forward 50 where it’s gathered by Daniel Harford. He is subsequently crunched in a bump by Dustin Fletcher and the ball spills free.  It is gathered by Scott Lucas who sends the ball towards goal, where Justin Blumfield gets out in front of Brendan Krummel and manages to keep the ball on the ground near the goal square as the pair tumble towards the right hand behind post. Blumfield gets to his feet first, runs back to the ball and gathers, turns on to his left and snaps a shot on goal from just inside the goal square.

Goal umpire, Steve Stirling approaches field umpire Troy Burton, as well as both boundary umpires to check if anyone had seen it hit the post after Nathan Chapman, Daniel Harford, Daniel Chick, Luke McCabe and Brendan Krummel all plead their case that the ball appeared to deflect off the goal post as it sailed through. Even the kicker, Blumfield, had a solemn look on his face, definitely not that of someone who was elated at kicking the winning goal. As the Hawthorn defenders continue to plead with Steve Sterling, Daniel Harford, in the heat of the moment scales the goalpost like King Kong on the Empire State Building, begins to bash it with one hand whilst screaming at the umpires that he can see the red mark on the post that was left by the leather of the ball glancing off it. Much to Harford’s dismay, he would go on to admit years later that being a twilight game, the game ball was actually yellow and couldn’t have left the red mark that he so aggressively attempted to use as evidence.

The Hawks would score one last goal and a behind to finish the game trailing by six points. It was a loss that still pierces the hearts of many who played that day, especially those that were in the backline and swear they saw the ball deflect off the post as it went through. Interestingly, former player and at the time commentator Peter McKenna was right behind the goals as the ball was kicked and is quoted saying “I had a good view and it definitely hit the post”. Later that week, Channel 7’s Live and Kicking football show did a skit where Harford was found still mounted to the post but this time draped in a chain and padlocks, refusing to come down until they admitted that it was a point that was kicked.

Just another chapter in the biblical sized publication that is the Essendon v Hawthorn rivalry.

Thanks for tuning in, keep your eye out for more Mongrel’s Mighty Moments.