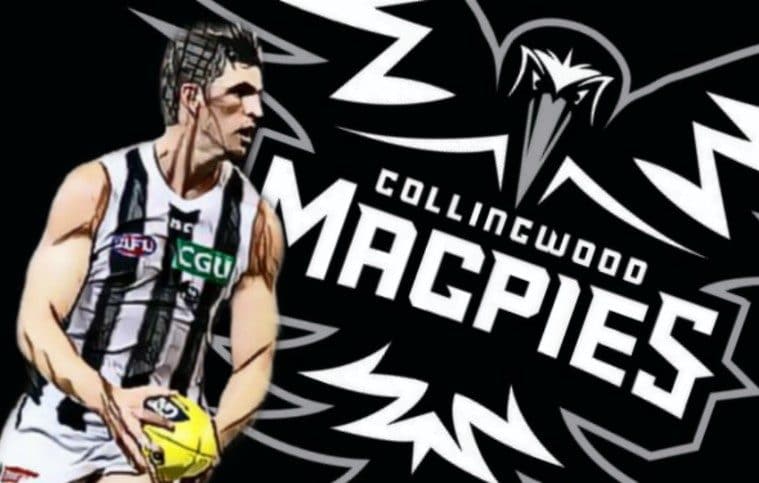 Legacy-Maker – Scott Pendlebury On The Verge Of Stats Immortality

Awesome Collingwood logo designed by @whitingdesign and used with permission- give him a follow on Instagram to check out his fantastic work.

Scott Pendlebury is an NBA fan at heart. We have all heard about his “basketball background” to the point where it has become a meme, but as we start to head toward the twilight of Pendles’ career, his legacy in the game is something that may start to become very important.

And if not to him, it is important to me.

In the NBA, there is always talk about legacies, and with the recent release of the Michael Jordan documentary, The Last Dance there is a renewed focus on history and what Jordan’s time meant to the game. In addition, it adds fuel to the fire as fans of certain camps argue as to who deserves the mantle of the greatest player of all time.

Some will hail Jordan as the undisputed king of the court, where others – usually the younger generation, will throw their support behind LeBron James. Of course, recency bias means that players like Kareem Abdul-Jabbar and Wilt Chamberlain are bumped down the list a little too easily for my liking.

As Pendlebury goes about his business in 2020, he will not only be striving for a premiership; this time as captain. He will also be adding to a legacy 15 years in the making, and one that fans will look back on and use to compare to players in ten, twenty or fifty years’ time.

You see, I place a great deal of importance on the achievements of a player the likes of Scott Pendlebury right now; a player who just a couple of short seasons ago was written off by some segments of the AFL media.

The Collingwood Captain suffered a debilitating back injury in 2017. It was the kind of injury that prevented him from doing everyday activities – getting out of a chair, doing up his shoes, or the worst, picking up his child.

Despite the pain and restriction, Pendlebury played on. He played through the season and endured the perception that he had lost that which made him special. And was determined to make amends in 2018.

The Collingwood captain rebounded back to excellent form and led his team to the Grand Final, only to see his Magpies fall agonisingly short, beaten by the West Coast Eagles in the dying moments. The loss denied him the ultimate honour as an AFL Captain – the opportunity to stand on the dais and hold aloft the premiership cup. The leader of the club that climbed to the very summit of the mountain.

But as we started once more at base camp in 2020, the challenge is before Pendles to ascend again. Asterisk or not, a premiership as captain would be the ultimate reward for a player who has almost done it all in this league.

He is already a premiership player (2010), a five-time Copeland Trophy winner, a six-time All-Australian, a Norm Smith Medallist, a three-time Anzac Medallist, and also won the Coaches Association Champion Player of the Year award in 2013. In a league that boasts champions left, right and centre, none stand above Scott Pendlebury.

Some might stand shoulder to shoulder with him, but none stand above.

MEMBERS – Saint Ben… What Could Have Been?

In 2020, we have a situation unlike any other I’ve ever experienced. I’m a few years too young to remember players being shipped off to war, and just missed the Spanish Flu by the lazy 54 years, so this postponement of the season has been as weird for me as it has for you, but for a guy like Scott Pendlebury… could it actually work in his favour?

At 32 years old, he has to be painfully aware that he cannot play forever, but that back injury, and the way he adapted to overcome it speak volumes of a person that now takes his preparation seriously. Stretching, yoga and even cutting out caffeine in order to allow his body to recover better have all been part of the Pendlebury regimen over the last couple of seasons.

After his disappointing 2017, Pendles rebounded with a stellar 2018 and followed up with a vintage display in 2019. His sixth AA selection was a wonderful reflection of his return to form, and just reward for his brilliant season last year.

But whilst there are accolades aplenty in his past, there are many milestones beckoning for the player many believe to be the best Magpie of the modern era.

As we approach the second outing of the interrupted 2020 season, Scott Pendlebury is starting to eye off a position in the AFL Pantheon of Greatness. Some will argue that he has already reserved a spot, but as Jerry Seinfeld taught us in his dealings with the car rental industry, reserving something and actually receiving it are two very different things. Sometimes you need something a little more concrete to back it up.

As it stands, Scott Pendlebury is right on track to break some records in the league, with the first set to tumble this year, even with the obstacle of a shortened season.

There was a time in the league where handballing was underrated, and underutilised. The kick was king, and it was not uncommon to see prolific ball-winners finish games with the number of kicks in the twenties, and the number of handballs on their stat sheet amounting to a big fat goose egg. But those times changed as the league smartened up.

First, it was Polly Farmer, then Barry Cable setting up teammates in better position with quick hands. Then it was Greg Williams farming the ball out to Gerard Healy and winning a Brownlow for him (just ask Diesel – he’ll tell you!). And into the modern-day we leap, with Sam Mitchell, Gary Ablett and yes, Scott Pendlebury some of the best exponents of delivery by hand.

There is just one current player ahead of Pendles in regard to all-time handball totals – Gary Ablett. With Gaz playing more forward, and Pendlebury adopting his trademark on-ball role, it is likely based on 2019 numbers that the Collingwood captain will catch and pass The Little Master by the end of 2020, if not early next season.

Ablett sits on 4127 career handballs. Pendles sits on 4015. He has him well within his sights.

Also ahead of Pendlebury are Scott West (4093) and the overall leader, Sam Mitchell (4155). It is likely that Ablett will briefly reign as the most prolific handballer in the history of the game… until Pendlebury takes the title as his own.

But that’s not all. How many seasons would you say Pendles has left in the tank? Another two years after this one, perhaps? I reckon that’s a fair assessment if all goes well.

He sits fifth all-time in tackles (138 behind Matt Priddis).

He sits eighth in contested touches (662 behind Gary Ablett).

And he slots in at tenth in uncontested touches (1002 behind Brent Harvey).

Some of these may sound like a bridge too far, but let’s take a look at just how far they are out of Pendlebury’s reach.

Over the last three seasons, Pendlebury has registered 362 tackles. Assuming he plays even just a couple of years, he will end his career as the greatest tackler the game has seen – not the category you’d expect him to lead, is it? But there you go.

His past three seasons have registered 321 clearances, so a fourth of very high quality may be required if he is to move past Sam Mitchell and into the all-time first place in that category.

Pendles has registered 689 contested touches over the last three years. Although Gaz will play this year, it is expected that this will be his last season. With a couple of big years, Pendlebury may end up atop this category.

And finally, although 1002 uncontested touches may seem like a heap, Pendles has managed 1,101 in this category over the past three seasons. He’ll catch Boomer Harvey as well.

So if we’re looking at Pendlebury historically, he will more than likely end up the all-time statistical leader in five individual categories. That is simply quite amazing. In his beloved NBA, John Stockton holds the all-time record in two statistical categories; assists and steals. The rest are shared amongst Kareem, Chamberlain, Olajuwon and Ray Allen (until Curry gets him in a couple of years). When we sit back and look at the record books, a player holding court in five different categories simply cannot be ignored.

That is where Penlebury is headed.

Some will argue that numbers don’t matter, but you know what – numbers do not lie, and they are an accurate reflection of just how good Pendles has been for the past 15 years. He may have a bit left in the tank yet, and I sincerely hope he does.

When all is said and done, and people start going down the afltables rabbit hole to find just who was best at what, I expect many to come away astounded by the numbers of Pendlebury across the board.

His career to date has been remarkable. His balance, poise, decision-making and ability to create space where there simply is none are unparalleled in the league. If there is a player universally loved and respected by the AFL community, Scott Pendlebury’s name would most likely be near the top of the list.

All-time leader in handballs, contested touches, uncontested touches, clearances and tackles. Accolades like that create an aura around a player. They’re proof of how good he has been for a long period, and they’re the kind of notes on a career that stand up when people use stats to assess the game.

Whilst they are not the be-all and end-all of football, but they are a part of the fabric of our great game. And they’d go nice with one more accolade…

Could 2020 be the year he makes it happen? Asterisk and all.