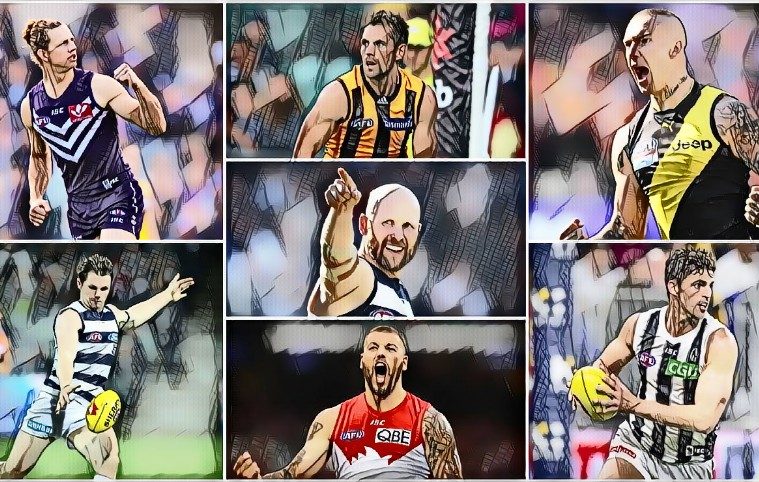 Mongrel Punt Player Of The Decade

Player of the Decade.

It has a nice ring to it, doesn’t it?  But how do you decide who is the standout player of the last ten years? Do you look at stats? Accomplishments? Awards? Performances in big games where it mattered most?

So, I’m an inclusive kind of fella. I like people to feel involved. How about we open it up for discussion and see where it leads us? Let’s have a look at the players that have excelled in the last ten years, and work our way through their claims on the title of player of the decade.

Please note, only awards won in the last decade appear in this article. It’s nice that someone won something in 2008 or 2009, but in terms of player of THIS decade, they’re irrelevant.

Buddy is the standout forward amongst the group. With competition from Jack Riewoldt and Josh Kennedy (WCE), Franklin was the most dominant force in front of the big sticks. Competing in all ten seasons, Buddy looks set to become just the sixth man in V/AFL history to kick 1000 goals. Hasn’t won a B&F in the last ten years, however…

Making the leap from Adelaide to Geelong in 2016, Danger looked like a man on a mission, racking up his Brownlow, MVP and Coaches Association Player of the year award in one fell swoop. Seven AA selections are hard to argue with, but does the lack of September success have a bearing on his claim?

At face value, I thought Ablett’s accolades for this decade would be… more voluminous. Yes,, let’s just say that. But that move to Gold Coast, whilst securing him many awards, robbed him of the chance to perform on the big stage this decade. Great CV, but he was a big fish in a small pond at the Gold Coast.

Ah yes, West Coast legend, Sam Mitchell. There is an argument that Mitchell was Hawthorn’s best and most consistent performer during their three-peat – my mate Adam West makes this point consistently. Whilst Hodge was the spiritual leader, Mitchell was the workhorse. Not playing out the decade, however, hurts in this kind of assessment.

I reckon people forget how good this bloke is, because he makes it look so easy. The only thing missing from an incredible CV is a Brownlow, but given the choice, he’d  prefer to have that Norm Smith and the premiership medallion. Five B&F awards in ten years is incredible.

If you’d told me after 2018 that Hodge would play the role he did with the Lions so well, I may have giggled, but you should never doubt the heart of a champion. An inspirational leader with results on the board, and played his best in the biggest games of the season.

Speaking of playing your best in the biggest game of the year, heeeeeere’s Dusty – two-time Norm Smith Medallist and current owner of September football. Despite starting as a burst-player, Dusty has never averaged under 20 touches per game, and on his day, is the most damaging player in the game.

Injury has probably damaged Fyfe’s standing in the game slightly, but when fit, there are few that can match him. Two Brownlows put him in elite company, but two MVP awards do the same. Alongside Fyfe, only Gary Ablett, Greg Williams, Wayne Carey, Michael Voss and Chris Judd have multiple Leigh Matthews trophies.

This is a captain I would follow into battle. Never, ever shirking the issue, Selwood’s decade has been one that exemplified leading from the front. Only Glenn Archer has secured more awards for his courage, and with five AA selections as well, courage was only one part of Selwood’s game.

400 contested possessions has only ever been achieved six times since the stat started being measured. Three of those times belong to Kennedy. He is a tireless workhorse who powered the Sydney midfield to their 2012 flag with his in-and-under work.

Overshadowed by Dusty in the later stages of the decade, Cotch has the addition of leadership to his CV. With an amazing habit of turning 30-70 situations into true 50-50 clashes more often than not, much of what Cotchin now does on the field is not represented in stats.

A little left field, but alternating between small forward and on-baller, Gray has walked a tightrope between two positions, and done it so well that he was almost a walk-up start as AA half forward flank for a few years. Those five Showdown Medal-winning performances have been wonderful as well.

Looking at the impressive list above, we’re in a bit of a conundrum. What do we rate the most out of these accomplishments? Is consistency a factor? Is brilliance in fits and starts more your cup of tea?

If you want continuous form, then you would have to be forced to look at the work of Patrick Dangerfield. In seven of the ten seasons, he has been in the AFL’s Team of the Year. Ditto for Lance Franklin, with injury perhaps the only obstacle preventing him from accumulating one or two more.

Or do we rate the huge finish to seasons, placing Dustin Martin above all others due to his ability to raise his game to new levels when the heat was truly on and the September spotlight shined down at its brightest?

We could survey ten people (because we’re too lazy to survey more) and get ten different answers depending on what aspect of the game appeals to them most. Maybe Hodge’s three flags as captain are enough to c0onvince you that his leadership was the decisive factor in the last decade?

For me, I love consistency, and I love a player that has been able to routinely deliver, year after year, even when injured. With that in mind, I would like to make the case for Scott Pendlebury.

Pendles began the decade with his first All-Australian selection, and ended it with his sixth. That he is still operating at that level is testament to the professionalism he brings to the table. He started the decade averaging 26.58 disposals per game and finished it averaging 27.29 touches.

At 31 years old, he has added new tricks to his arsenal, getting out in the open more to hit a career-high for uncontested possessions in 2019. Not once in the last ten years has Pendles’ disposals per game numbers dipped below 26.58, and that was in 2010… when he won a Norm Smith Medal – the best player in the biggest game of the year.

Whilst others have had huge seasons (Dangerfield in 2016, Dusty in 2017 and Tom Mitchell in 2019), Pendlebury’s consistency has been his biggest weapon.

I’m not sure the way you guys value a player, but for me, Pendles ticks all the boxes. Played a big role in a flag? Check. Rarely misses games? Check ( he as one season under 20 games in the last ten years). Capable of individual brilliance? Check, check, check! Is consistently great? Five B&Fs and six AA selections indicate that’s not an issue either.

I am no Collingwood supporter, but I cannot help admire the way Pendles has gone about it for a full ten years. Whilst others have had patches of greatness, Pendlebury has been consistently wonderful. His five B&F awards also have two second place finishes to accompany them. If you’re talking Collingwood in the 2010s, you’re talking Scott Pendlebury.

He is The Mongrel Punt player of the decade*

As stated at the top of the page, this is very subjective. Just because he is my player of the decade doesn’t mean he is yours (and I’m sure if I stated it was, you’d let me know all about it). Please add your thoughts as to who you think should be the player of the decade in the comments below, or hit us up on our socials.

*And for that he gets a box of Extra Chewing gum.

More Mongrel goodness? Our members get more articles in the off-season, a heap more during season, and early access to our Good, Bad and Ugly game reviews. Plus, you’ll support us in growing… always growing muhahahaha! Click the pic below and jump on board – sincerely, your support is greatly appreciated.