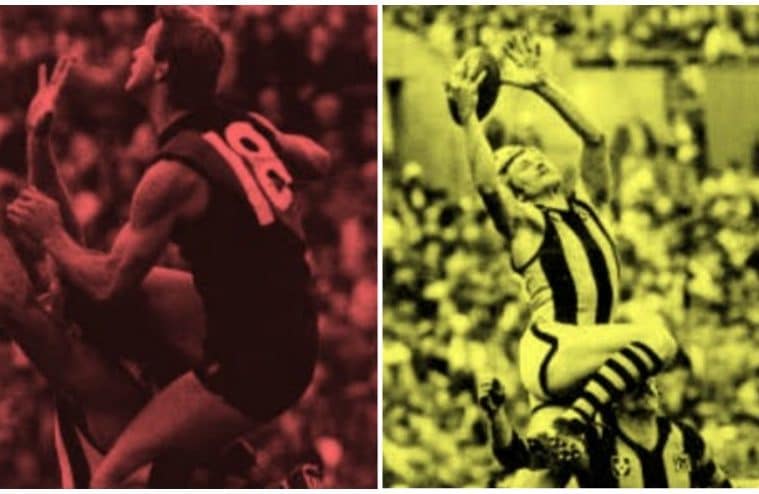 There are memories of Phil Manassa grabbing the ball across the half back line half during the last quarter of the 1977 Grand Final Replay, and taking off down the wing. He put the foot down and left Malcolm Blight in his wake, had a couple of bounces, sold a beautiful dummy handball to get within range, and slammed home a goal to get the Magpies within 19 points. If you listen to those who saw it, you’d swear he’d run 300 metres and beat the whole team by himself to slot that goal. Others have done it since, and possibly better. Mick McGuane had a similar run and goal. As did Jeff Farmer, but Manassa’s run is legendary at Collingwood, and in the AFL.

There’s Tony Lockett’s 16 straight goals against Fitzroy in 1995. It added to the perception that the big man hardly missed when lining up for goal. He kicked them from every angle, that day. At the time, the Lockett v Dunstall debate was still raging, and also had the name of Gary Ablett Snr thrown into the mix as to who the best forward in the land was. This performance by Plugger put to rest whatever doubts people had at the time about his standing amongst full forwards.

And then there were the aerial duel between two of the league’s highest flyers. With respect to Trevor Barker, Peter Knights and Paul Vander Haar were two of the best high marks in the business in 1978, and on a Saturday afternoon in June, they went head to head. Though this match up is fondly remembered, they’d played against each other before. The Hawks and Bombers met twice in 1977, with the Hawks emerging victorious on both occasions.

Their second encounter was in Round 22, 1977. Vander Haar had warmed to this VFL business by this time, and recorded 19 touches to go along with eight marks and a goal. Knights had 17 possessions of his own, with five marks and a goal. The stage was now set for their iconic clash.

Knights was at the peak of his powers by the time 1978 rolled around. He’d finished second in the Brownlow in 1976 and would go onto be runner up again in ’78, losing by just one vote to Malcolm Blight. He went on to be part of the mighty ’78 Hawthorn premiership side and was Hawthorn’s Best and Fairest that year. He looked a bit like a comic book character; blonde mop, porn-star moustache, a bit of swagger about him. On-field, he read the play better than anyone else in the game across half back and always backed himself in to beat his opponent in the air.

At just 20, Vander Haar was the new kid on the block. In his second year at Essendon after winning the VFL’s Recruit of the Year award (the equivalent to the AFL Rising Star award), Vanders was making a name for himself by climbing all over the back of unfortunate defenders, and taking hangers. He was runner up in the Crichton Medal in his first season, one vote behind Simon Madden despite not debuting until Round Five, and was perceived as a future pillar of the club. The potential head to head matchup between the two had football purists salivating at the prospect.

It’s an understatement to say that football was a different beast back then. It was a game built on contests – not ball-retention. Both men went into the clash looking forward to a true one-on-one contest, and that is exactly what they got. There was no Hawk dropping in the hole in front of Vander Haar to help Knights out. There was no Bomber blocking Knights to allow Vander to get an easy mark on the lead. It was a straight up clash between two high marking champions, and there was more than a little ego involved. Six years older, Knights was one of Vander Haar’s heroes. The young Bomber grew up a Hawthorn supporter and now, here he was about to stand next to the man he’d looked up to. And more than that, he was about to take it right up to him at every contest.

The Hawks traveled to Windy Hill for the contest, and as expected, Knights went to Centre Half Back and stood beside the heir apparent as the ball was bounced. They went head to head for the entire day. Four quarters of contested marking by two of the art’s best exponents. Over 24,000 people witnessed it in person, but like any momentous event, those who claim to have seen it live completely dwarf the actual number in attendance.

Footage of the game is rare. I have been unable to locate a full copy of the game, and doubt I ever will. There are a few snippets around as part of highlight packages, or season reviews such as ’That was the season that was’ which you can find on YouTube, but as with most legends, so much is left to hearsay.

Lou Richards claimed in Melbourne newspaper The Sun following the game that “it’s a long time since I’ve seen such sensational high marking as that of Vander Haar and Knights.” Someone should’ve possibly edited Lou’s work, but the sentiment is clear.

Knights claims that he and Vander Haar contested 25 marks against each other that day. The Hawthorn Centre Half Back took 10 grabs. Vander took 6 and kicked a couple of goals as the Hawks ran out winners by 29 points. In Vander Haar’s 2016 ‘Open Mike’ interview with Mike Sheehan, it is speculated that there may have been more marks between them, but we’ll never know. The stats say 16, so that’s what we’ll go with. All contested.

On face value, Knights won the duel that day, but it was just one chapter in the Knights v Vander Haar duel. Sadly, other chapters failed to live up to the level of that epic clash in 1978. Modern fans may not be truly aware of just how impressive 16 contested marks in a game are between a pair of opponents. Here’s some context – when the Hawks and Bombers met in Round 1, 2017, the contested mark total for both teams was 13.

The two would meet again in Round 22 in 1978, with Hawthorn again prevailing. Vander Haar had 15 kicks, four marks and kicked two goals, but Knights was very good again, with 26 disposals to go along with his six marks. The Hawthorn victory would mark their fourth win in a row against the Bombers with Knights in the side. It would also be their last for a while.

It was four long years until the two combatants squared off again. In this time, the tables had turned substantially. Knights had missed four straight games against the Bombers due to a litany of injuries, and Vander Haar had seized the opportunity.

The Flying Dutchman’s stats in the four games Knights was missing are impressive. He averaged 17 disposals, 7.25 marks and 3 goals per game over that period to become one of the catalysts for the Bomber revival.

By the time they encountered each other again, Knights was the wrong side of 30, and the opportunity for an ongoing rivalry had passed. They would only play each other four times in total following their epic 1978 clashes.

In Round 18, 1982, the Hawks beat the Bombers at Windy Hill. Knights had a very modest eight disposals, two marks and a goal, whilst Vander had 16 touches, 9 marks and a goal of his own.

The 1983 Grand Final saw Knights capture his third flag with the Hawks. Vander Haar contributed 10 disposals and three marks, whilst Knights had 18 touches, 6 marks and a goal to be amongst Hawthorn’s best.

In their next clash, neither man had much of an impact. At Windy Hill in Round 2 1984, Knights had seven disposals, four marks and a goal. Vander Haar amassed equally modest stats of eight touches and one mark. For the remainder of the 1984 season, Knights struggled with a knee injury that restricted him to four games in total. He missed the ’84 Grand Final, and Essendon’s amazing come from behind win. Vander Haar didn’t miss that one and celebrated hard, according to the stories.

In 1985, they managed one last game opposite each other. In Round 14, they had their only ever meeting at what was then called VFL Park. Knights managed three goals to go along with his eleven disposals and seven marks, whilst Vander Haar collected nine touches, five marks and a goal. It was the Essendon champ’s first win over a Hawthorn team containing Peter Knights.

Despite  coming back from injury to play in the Preliminary Final in 1985, Knights was dropped for the Grand Final that saw a rampant Bomber team destroy the Hawks. The Knights versus Vander Haar duels were done, and none ever came close to topping their first real head to head clash. A rivalry that started with such a bang ended with little more than a whimper.

When thinking of duels and rivalries since, only the Wayne Carey – Glen Jakovich duel of the 90s comes close – the number one Centre Half Forward in the game matched up against his physical equal. As good as it was, it was a slow burn over many games. It does not have the exclamation point on it that the Knights-Vander Haar match up did.

The Knights-Vander Haar rivalry could’ve been so much more. Injuries to Knights robbed VFL/AFL fans of more enduring memories of the two blondes flying for screamers with the best man on the day taking the honours. In an age where coaches would allow players to go one-on-one, we had two that were willing to back their own ability against each other. Injuries to Knights killed it. However, for one day in 1978, those two stood in the football spotlight. And that spotlight was bright enough then that the old guys like me are still reminiscing about how brilliantly bright it was,  40 long years later.

In these days of team defence, blocking, loose men, defensive sets and blocking for teammates, we’ll likely never see anything like it again.