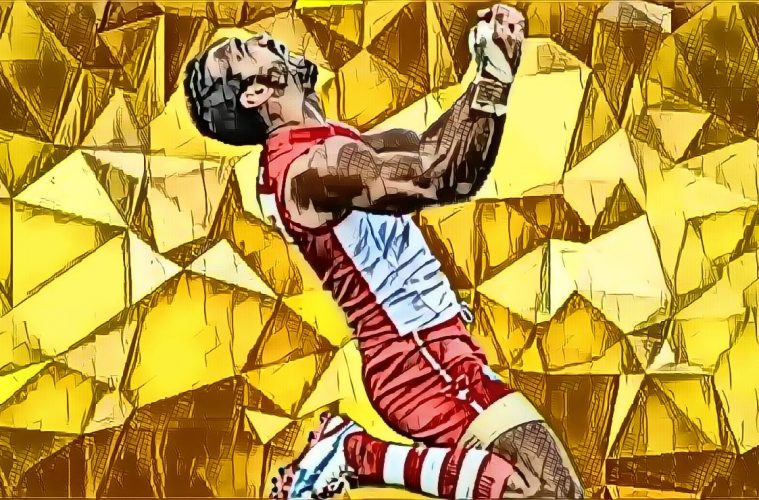 What Could Have Been… Goodes as a Hawk?

I’m an avid podcast listener and have about three or four on rotation in my car weekly.

One of my guilty pleasures is the Sam, Mike and Don podcast, featuring Sam Newman, Mike Sheahan and Don Scott. Yes, a lot of rubbish is talked and they tend to spend a fair amount of time either revving each other up, or cutting each other down, but in between the banter and over the top rants, you can occasionally find a genuine pearl of information.

And that is what I discovered a couple of weeks ago.

When discussing the inclusion of Marlion Pickett in the Richmond premiership team, the direction of the conversation turned to his teenage indiscretions that led to him spending time behind bars.

Don Scott, in particular, was quite adamant that what Pickett had done as a young man had little to do with the man he is now, and upon some needling, recanted a story about his time at Hawthorn – not as a player, but as the man who tore the Velcro Hawk off a Melbourne jumper and refused to be party to any kind of merger between the clubs as a board member.

Those actions cemented Scott in the hearts of many Hawthorn supporters. Not only was he a premiership captain; he was the man who stood up when the club was on its knees and gave it the hand it needed to get up and thrive once more. He is a Hawthorn legend and one that deserves the admiration of all Hawk supporters.

The crux of this issue is the behaviour and the resultant perception of young men and the willingness of a club to take a chance on them.

As Scott defended Pickett, he spoke about his time at the Hawks in the mid to late nineties and how he would have liked to have drafted a player, but some at the club had concerns about the young man. Scott claimed to be quite taken by the way the young bloke played across half back, and though he refused initially to state who it was, he quickly relented under questioning from his two co-hosts.

“Well, he went on to win two Brownlow Medals for Sydney,” he said, leaving no doubt as to the man’s identity.

What could have been…

Adam Goodes was taken with pick 43 in the 1997 National Draft. The Hawks not only had pick 42, but picks 35 and 19 as well. They had ample opportunity to select Goodes, but opted not to. I wonder how often those recruiters who had doubts wonder where Chris Obst (pick 19), Marcus Baldwin (pick 35) and Matthew Dennis (pick 42) ended up. They finished their AFL careers with a combined 27 games.

Scott didn’t elaborate further, and did not name those who questioned Goodes’ character or ability back in 1997, but the possibilities that open up had the Hawks been a little more courageous that day are mind-boggling. The Hawks would have been blessed with a generational mobile ruck-cum-forward. The Swans would not have had the player who became the face, and the heart of their club.

It would be 11 years after that draft until the Hawks lifted the premiership cup, and one cannot help but wonder what a difference a player like Goodes could have made to the Hawks at that stage. Hawthorn struggled through the late nineties and into the new millennium, finishing 15th in ’97, 13th in ’98, 9th in ’99 and finally cracking the top eight in 2000.

Would they have got their quicker with a 6’ 3” mobile ruck aiding Paul Salmon?

It’s worth noting that Goodes did not debut for the Swans until 1999, winning the Rising Star award in the process, and won the first of his two Brownlow Medals in 2003.

Hawthorn’s early 2000s renaissance came to an abrupt end in 2002, when they missed the finals, and would go on to bottom out over 2004/05 as they finished 15th and 14th respectively (it was a 16 team competition at that stage). But it was around this time they had started to draft a little more wisely, and the names of Hodge, Lewis, Mitchell, Franklin and Roughead started to make their presence felt.

You have to wonder – would they have had access to those guys had Don Scott got his way in 1997 and convinced the Hawks to take a risk on Goodes? Could the acquisition of Goodes had a ripple effect on where the Hawks finished, and subsequent draft selections? Could the impact of having a player the class of Goodes in brown and gold have changed the course of the team that would go on to capture an historic three-peat?

History tells us both the Hawks and the Swans would be okay with the way things turned out. Goodes wore the Brownlow twice and was part of two flags. The Hawks would go on to create a dynasty.

Years later, Hawthorn took a risk on a young man by the name of Dayle Garlett with pick 38 in the 2013 Draft. Unfortunately, his story did not end like that of Goodes or Pickett. He returned home to Western Australia after playing no games for the Hawks, and was later sentenced to five years jail for a string of drug-fuelled crimes.

AFL footy, and in particular, the drafting aspect of AFL footy is about risk versus reward. In 1997, Don Scott claims the Hawks refused to take a risk on a young man named Adam Goodes. Sydney thought he was well worth it, and they were absolutely correct.

In the end, it was Goodes playing a pivotal role in the 2012 premiership win over the club that opted not to take him.

How things could have been different had the Hawks called his name with pick 42. But I am pretty sure everyone involved is content with the way it turned out.

Like this? Get more at The Mongrel Patreon, and help us grow in the process