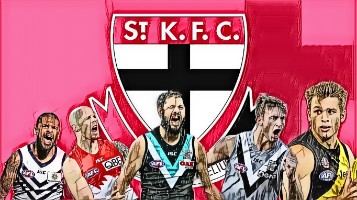 Something In The Water At Moorabbin

As I lazed around last night perusing the comings and goings of trade week (it took about three minutes), there was yet another name nominating St Kilda as his preferred destination.

Richmond’s Dan Butler has seen his stock plummet in 2019, yet remains a bargain pick up for any team. However, with so many teams to choose from, his nomination of the Saints has continued 2019’s weirdest trade period trend – the pilgrimage to Moorabbin.

So, what are these players seeing that I’m not at the moment?

I’m not going to state that I am some expert – I am wrong way too often to even begin to make that sort of claim – but looking at the recent history of St Kilda hardly buoys me with confidence about their direction.

In the past three years, the Saints have finished 11th, 16th and 14th without ever really threatening to go anywhere. They’re looking like they’re going to lose their most consistent player of the last ten years in Jack Steven for what is a pittance in terms of what he’s meant for the team, as well as Josh Bruce, who had some great moments in 2019. Their young key forward has suffered a succession of concussions to the point his career is in jeopardy, and they are fresh off sacking a coach and appointing Brett Ratten to run the show.

During the season, the Saints were reportedly looking at either of Todd Goldstein, or the unproven Sam Draper from Essendon as possible targets during this period… despite the fact they possess one of the best young ruckmen in the game in Rowan Marshall, as evidenced by his second place finish in the Trevor Barker Medal. They’re coming off signing Dan Haneberry to a long term deal which saw Hanners get on the park for five games this season, with the jury still well and truly out on the wisdom of that move.

So, with all that going on, why have the Saints become so attractive?

But with that popularity comes problems of its own.

As of Friday afternoon, St Kilda had made just one move in the 2019 trade period, trading away pick six for two lower picks (12 and 18), which the team believed would allow them more room to move with potential trades, but Fremantle have thrown a spanner into the works with their request of two first round picks for Hill. If the Saints decide the running man is worth the price, how are they going to find room for the others?

And who will miss out?

As it stands, it’s looking increasingly like Ryder may not land at St Kilda, which is not the worst thing in the world (Marshall is great!).Having been reportedly touring Ikon Park in the latter part of the week, Ryder may now be feeling as though his move to St Kilda may not be the fait accompli he thought. Right now, the Saints don’t have another pick until number 76, and that holds very little value in the current market. Or any market.

St Kilda have incoming picks from the impending Steven trade, as well as whatever they get for Josh Bruce, but will that be enough to secure their new talent? You’d think Butler would only require one of those late picks. He struggled to get a look in at Richmond this season, playing just seven games and averaging career-low numbers, but has the ability to be a very good pressure small forward if he can get things together.

However, it is Dougal Howard that could be the jewel of this trade period, and would be an amazing pick up for any team. The Saints are in the box seat, but the longer this drags out, the more likely the big defender (he’s not a forward, despite what Ken Hinkley thinks) may look to greener pastures. It’s a nervous time, and with Howard under contract for three more years, and the Saints probably only able to offer whatever they get for Steven or Bruce this season, we’re looking at St Kilda potentially dipping into their 2020 draft stocks if they want Howard’s talents on their books. And will that be enough to loosen Port’s grip on Howard? He is a great asset, and at just 23 years of age, is yet to hit his peak. Maybe a package deal with Ryder costs them just a little more if they’re still keen on the big man.

But the big problem here lies with Brad Hill, and it is, in part, a problem of their own making. Fremantle picked him up for the miniscule price of pick 23 in 2016, when he decided to go home after experiencing premiership glory with Hawthorn. The Dockers are now looking at cashing in on the good form of the wingman with a classic buy-low, sell-high tactic. Demanding two first rounders, and with their eyes on pick six, St Kilda’s decision to trade down in the draft can only be described as bizarre, and may have jeopardised the enture move. With Hill under contract for a further two seasons, the Dockers won’t necessarily be in too much of a hurry to offload their valuable asset.

St Kilda, for the first time in a long time, is at the centre of the trade bubble. They have players looking to come and go, and with a chequered recent past in terms of acquisitions, the high hopes of Saints fans have the potential to turn to despair.

Can the Saints work a miracle this off-season and get all their talent on the books? And if so, at what cost?

If they can’t secure Brad Hill after their jettisoning of pick six, how much of the blame falls squarely on their list management team? At who does the finger of blame point?

It will be the same person that receives the pats on the back as the ink dries if he does sign.

Irrespective, if I were him I’d be feeling pretty nervous.