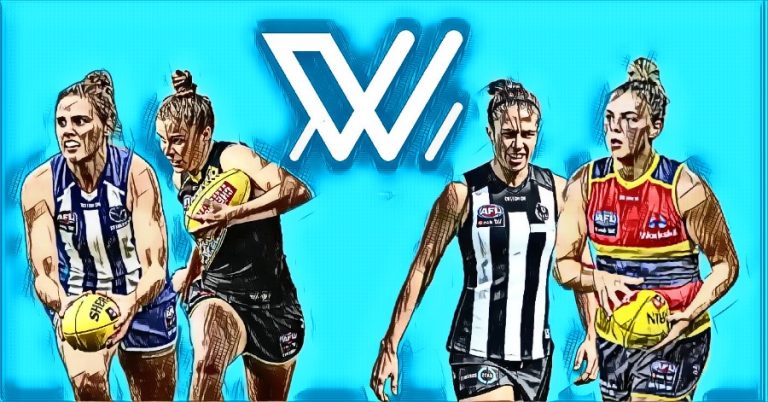 After a cracking first week of finals, we’re down to six teams. The two best teams in the league this season await the winners of the two semi-finals this week and they are both games where anything can happen.

This is why I’m back to write up some previews and see if I can dissect what can happen, what should happen and what I’ll probably think will happen, which will most likely be incorrect, because I only managed to get two out of four right last week… that will teach me to tip with my heart.

I know that a lot of the news this week in the AFLW has been about the decision to host this game at Punt Road, which only holds about 10 people, in favour of grounds like Ikon Park or even Marvel Stadium – both of which aren’t being used.

I get all the insiders at Richmond are wanting a home final because they feel they’ve earned the home ground advantage. Well, guess what? Geelong’s men’s team have been crying out for a home final at Kardinia Park for years and have been constantly knocked back by the league because they want as many fans getting to the game as possible.

Will it sell out at Docklands? Maybe not, but I reckon you could easily get around 7000-8000 people at this game. I’d like to think even more, but then again, this clashes with the Matildas’ exhibition game at AAMI Park around the corner and there’s a large portion of AFLW fans who are just all-round fans of women’s sport in general.

If we’re being honest, North could be considered lucky to even have got past them. Geelong – on stats – looked the better side. North conceded 41 inside 50s and only had 18 themselves. But in their favour, they were defensively outstanding; 83 tackles to 58 outlines that they kept the game skinny and really put pressure on the Cats to hit targets and link up their outside run, which has been a core strength over the second half of the season.

Amy Smith has been somewhat of a revelation the back half of the season. Last week against the Cats, she had a whopping 17 tackles and for a lot of the game, had the unenviable task of manning up on Amy McDonald around the stoppages. McDonald would finish the game with 23 disposals, but just the four clearances and if you watched the game like I did, McDonald wasn’t given much time to dispose the ball to her running mates on the outside.

Smith’s last three weeks have seen her average over 11 tackles and was matched up with Mon Conti around a lot of the stoppages last time they met, we could be set for a great rematch. Like we should with Meg Macdonald and Jasmine Garner.

Garner’s credentials this year have been immense and should be one of the first picked in the All-Australian team, but Macdonald keeping her to just 13 disposals last time will be one of those cases where if it isn’t broke, don’t fix it. I wouldn’t be falling off my desk chair if I see that match-up come to fruition again. Macdonald spent 100 percent of centre bounce attendances in their last encounter

Macdonald was given the matchup on Ally Anderson last week, and whilst Anderson had a pretty solid game, she wasn’t the most influential midfielder in that Brisbane team, which was both a positive, but also a detriment to the Tigers’ game, as they lost in a lot of those key stats: contested possessions were -12, clearances were -13 and an uncontested possession count of -32 meant that they were playing catch up to the Brisbane side all game.

Having said that, this is a big week for not just the midfielders, but for the forwards. Katie Brennan kicked all of their goals last week, but there needs to be more of a consistent spread of goalkickers. Courtney Wakefield has disappeared at the wrong time of the season, kicking 2.2 in her last three games.

The pair of Stella Reid and Emelia Yassir must be valuable contributors come the first bounce, and they’re certainly capable.

It won’t come easy. Last week, the North defenders were brilliant in staving off nearly every Geelong charge that was brought to them. North’s zone defence worked well to close Chloe Scheer out of the game. Jasmine Ferguson and Sarah Wright have been strong this season, but often float under the radar. Likewise with Brooke Brown, who has been in the higher echelon of the most improved players of the competition this season.

Also, a big thing to point out for North is that Emma Kearney didn’t play in their last encounter. Neither did Kim Rennie – both of who will be valuable in terms of structural balance. But in terms of providing the drive out of defence, Kearney will be one of the more important players for this North side.

Kearney leads all North players for intercept possessions, averaging 6.7 per game, and rebound 50s, averaging 4.2 per game. She also averages 306 metres gained per game, which tells you about her willingness to move the ball forward at all costs and often the one who generates out of the defensive half.

This is a very hard game to predict. On one hand, I’d love to say that Richmond bounce back, because it has been very rare that they have two stinkers in a row. But North Melbourne are the side that knows how to handle themselves in a big-time final, having had experience in years gone past. If they get their kicking boots on, they could run away from the Tigers away from home, but I’m going to tip the Tigers to bounce back in a very close one.

The winner of this one awaits Brisbane in the preliminary final. This is perhaps the most intriguing match of the two this weekend, given their matchup earlier in the season and their form guide heading into the weekend.

Let’s start with the Crows. They were very good in the opening quarter against Melbourne, they were on top of a lot statistical areas and kicked the first three goals of the match and opened up an 18-point lead at the first break. From there, Adelaide only managed just a further seven points to their quarter time total and they got outrun in the last quarter.

This week, they will have to do it without Chelsea Randall, which is significant considering her impact on this Adelaide team this season. She’s played a little bit of everywhere this season. Against Melbourne, she spent more time in the forward line than she did in the midfield – just 20 percent of centre bounce attendances last week, but across the board, she’s averaged 62 percent.

My biggest issue with Adelaide is that it feels like it’s too reliant on its stars. I could go on and on like a broken record about what Ebony Marinoff and Anne Hatchard do to this team and how they excel out of stoppages and centre bounces, but both were a lot quieter than they have been this season, both registering under 20 disposals and combining for just nine clearances.

This is a big week for them against an understrength midfield and perhaps a big game for Teah Charlton. Not that she’s been terrible – in fact, quite the opposite, she’s been very solid. But these are the kind of games that make great players – backs against the wall against a side – although understrength, the Pies they have shown all year that they won’t be pushovers.

Charlton’s numbers read of averages of 13.3 disposals, 8.1 contested possessions, three clearances, 4.9 tackles and 117.1 metres gained per game. She’s a player that thrives on the in-and-under work – fourth at Adelaide in contested possession averages. But I’d love to see her work on the outside a little bit more and provide some more impact either forward of the ball or defensively.

Up forward, they need to find more options to benefit Ashleigh Woodland and Danielle Ponter. Between the pair of them, they have combined for 24 of Adelaide’s 61 goals this season. Add Randall to the mix and it’s practically half of their goals.

Caitlin Gould stepped up last week with two goals in the opening term and I’d like to see that carry over to this week. There’s a mountain of potential with her and how she plays. As a ruck, she’s solid with her tap work and up forward, she’s got the mobility and the strength to play as a key forward.

It’s an interesting ruck battle to say the least. The tandem of Gould and McKinnon split the duties roughly 50-50 and they combine for an average of over 32 hitouts per game (Edit: since writing this, McKinnon has been omitted from the team). Collingwood’s ruck tandem last week was Imogen Barnett, who rucked for 71 percent of the game, and Alison Downie as the second up, with Sabrina Frederick pinch-hitting at times too.

Barnett has been an intriguing player to watch and will be interested with what she does on Saturday to douse the efforts of the Adelaide pair. Against Alice Edmonds last week, the hitout count was 18-12 in favour of the Dogs’ ruck, but it was the ability to roam and present up the ground that’s given Barnett confidence that I haven’t seen since she was kicking goals for fun in Collingwood’s VFLW team last year.

The hero of last week for the Pies was Eliza James, who kicked four goals and should’ve had possibly five or six if it weren’t for some wayward shots on goal, but the Pies had a lot of good moments throughout the game that showed that their vision and their forward line structure can coexist.

Last week, Chloe Molloy attended 50 percent of centre bounce attendances and looked to be situated more across the forward half of the ground last week. When she gets going on the scoreboard, the Pies look a vastly different side and with Ruby Schleicher and Sarah Rowe both cleared to play after sustaining injuries in the last quarter last week, the Pies’ depth doesn’t take any substantial damage.

Jaimee Lambert and Mikala Cann are reliable and tough as nails midfielders, whilst seeing Aishling Sheridan take on Ellie Blackburn head to head was a fun battle to watch. I’d love to see her get the job on Ebony Marinoff to start things off. We’ve seen this in the AFLW before, if you don’t give these premier inside mids any space, then the impact is severe enough to cause change to the result.

After their win against the Bulldogs last week, I made the remark about the Pies potentially heading for a serious whooping by the reigning premiers this week. They were nearly five goals up midway through the third term and were a kick away from choking.

If it wasn’t for poor accuracy in the opening term, the game would’ve been over by quarter time. The Pies must take every opportunity they can and maximise it against this Adelaide team, because we know that on their day, the Crows can hit the scoreboard in quick succession. I’m tipping a strong bounce back by Adelaide this week, but the Pies won’t make it that easy for them.