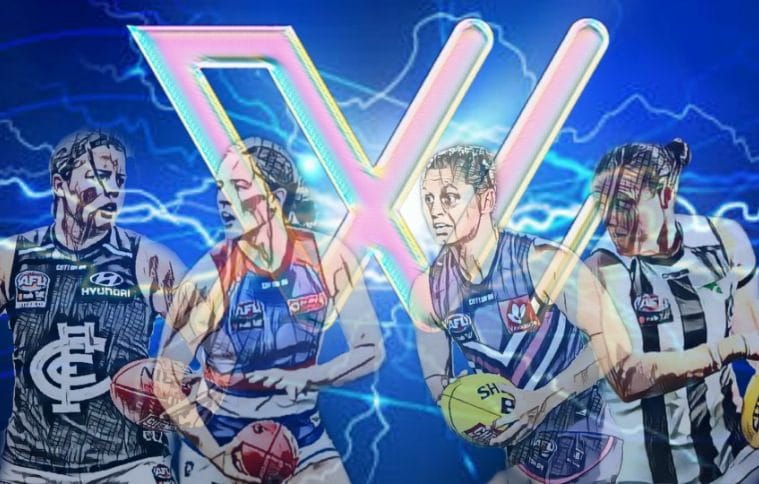 Well, it’s time for the first week of making changes of the rolling All-Australian team. I’ve watched most of the replays, read through the reports, the stats, done everything I could and this was not an easy team to run with.

Nonetheless, it was a bit of fun having a look over the team and making decisions; some you may or may not like, and that’s the best thing about this. I love differing opinions, even when I’m being told that I’m a number of things that won’t be repeated on here.

But enough of that, let’s take a look at the changes for my rolling AFLW All-Australian team for round two.

There are six changes all up, so I’ll try not to waffle on too much. I’ll also try not to say the word ‘waffle’ too much because waffle fries are very enticing right now.

I’ve made two changes to the backline to start with. Stacey Livingstone – yes HB made a little comment at the end of last week’s piece and I took it on board – was definitely stiff to not make the side last week, but she gets in after playing another strong hand in the Collingwood backline. The Cats kicked two goals in the opening term and would go on to add just a further two points for the match.

The other inclusion is Jade Pregelj – now I know this will sound a little extreme considering the Suns got absolutely belted by Brisbane, but Pregelj’s performances so far in the season can’t be ignored – she’s second in the competition for intercept possessions. She was in the All-Australian squad of 40 in 2020 for this reason – she’s a tremendous intercept defender.

Moving into the middle of the ground, I’ve made a change in the ruck, whilst changing around a couple of positions in the process. I’ve moved Ellie Blackburn from the bench into the starting five midfielders and have moved Brittany Bonnici to the wing alongside Karen Paxman who keeps her spot in the side.

Starting in the ruck this week is Adelaide’s Rhiannon Metcalfe, who I think has been one of the more underrated rucks so far this season. She currently leads all rucks for hitouts averaging 23 per game, is equal-first for rucks in clearances, averaging 3.5 per game and leads all rucks outright for score involvements, averaging 4.5 per game.

The remaining three changes will come from the bench – two midfielders who’ve earned their spot from their performances on the weekend – Bri Davey was arguably the best on ground in the Pies’ win over the Cats at Victoria Park and Ebony Marinoff has started the season in fine touch for the Crows.

The other is a forward that I feel has gone unappreciated outside the four walls of the Brisbane football club. But for the second-straight week, Greta Bodey has kicked two goals as a forward option in each of her two games and for that, she gets a spot on the bench. Brisbane’s first two weeks have been special to say the least, and maybe the Lions fans will argue a few more players need to be here – but we’re only two weeks in, and there are many Lions who are right in the mix.

So with the ins, there are the outs. And it’s not that these players played terribly by any means, it’s just that I thought there was someone out there who played a little better, and this team is more about recognizing the ones who are more consistent with their performances.

Vaomua Laloifi missed this week due to a concussion and was terribly missed by the Blues last week as they lost by a goal for the second straight week. Tarni White played alright against the Roos, but was overtaken by someone who has been a tad more consistent. I wouldn’t put it past her to have a big one against the Blues this week.

Kaitlyn Ashmore was another player who wasn’t that bad for the Roos last week against the Saints. But unfortunately, she was bumped out of the side in favour of players that got their hands on the footy a bit more. Bonnici’s work around the ground has meant that she can play just as well on the outside than her preferred position on the inside.

Bec Beeson played another strong game on the inside, but her efficiency over the weekend was very poor, meaning she gets dropped. That was a hard one to do – she’ll be every chance to reclaim a spot in the side next weekend. Emma King was well held by Rhi Watt on the weekend, whilst Belle Dawes was very good, but I sort of replaced her with her teammate in Bodey looking for another forward option.

The ones closest to a recall are both Beeson and Dawes, so watch out for both of them across the weekend.

Many Lions to look out for this weekend. I was tossing and turning whether or not to put Kate Lutkins in after a typically strong performance from her on the weekend, but I thought both Harriet Cordner and Janelle Cuthbertson did very well to hold their spots down for this week. If Nat Grider continues to put in stunning defensive performances like that then I can see her forcing her way into this team.

Dakota Davidson currently leads the league in goals with five for the season, but four of those came from their win over the Suns this weekend. Likewise with Jesse Wardlaw, who kicked all four of her goals this season in Sunday’s QClash triumph. But if they can keep kicking goals consistently, then they’re not too far away from being called in.

As far as small forwards go, Danielle Ponter kicked three goals for the Crows on the weekend and could mount a claim if she can add another two or three goals on an elite Fremantle defence. Kate Hore has also been consistent in front of goals, kicking two goals in each of her two games so far.

Maddy Prespakis played a ripping game on Friday night and did everything she could (nearly) to try and will the Blues over the line – She’s close to being locked in the midfield. Emma Kearney, Lily Mithen and Jenna Bruton are also making very strong claims to be selected as midfielders.

The ruck race is proving to be very interesting, Rhi Watt’s form in the first two weeks had her in consideration, given the amount of work she’s done around the ground as opposed to contesting in hitouts. Lauren Pearce is another player who is in the mix as well.

Tahlia Randall is another defender I’ll be watching out for this weekend, especially during North’s big clash with Melbourne. Randall did a superb job in keeping Caitlin Greiser goalless last weekend and the Dees forward line has been in good touch so far this year, so that’ll be something to keep your eye on this weekend.

It’s hard to really put pressure on players after two games, but with all of those players banging down on the door to get a spot inside this team, there’s going to be huge pressure on players. I don’t envy being a coach of a local football team at times.

The wet conditions in Western Australia made it pretty tough for both Gemma Houghton and Sabreena Duffy to get on the scoreboard. But I felt as if both players did their best in trying circumstances. I’m looking forward to seeing how they play next weekend against the Crows – god that’s going to be a fantastic game to watch I reckon.

The performances of both Davidson and Wardlaw have also put a bit of pressure on Izzy Huntington to perform up forward. Huntington actually played pretty well in what were difficult conditions in Victoria on Friday night, and still averages over four contested marks per game, which is a bit of a gap from the next best key forward.

Cordner could be overtaken in the key defensive post by either Randall or Lutkins if both have another really strong performance on the weekend. Again, nothing against how Cordner has started the year, as a matter of fact, she’s arguably been one of the best recruits in any team this season. But sometimes, it’s impossible to overlook how players in the really good teams are performing.