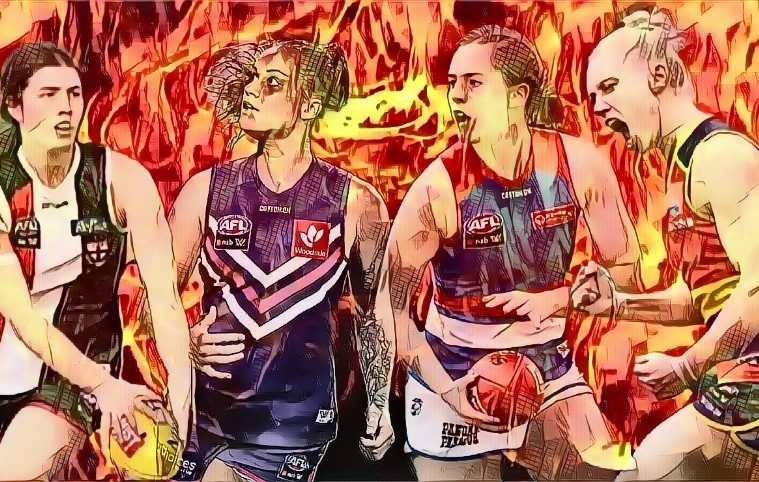 It feels like a long time between Sunday and Friday, so I needed something to do during the week to keep the AFLW content flowing on the Mongrel.

Across the weekend, my good friend and co-host of the A3 Footy Podcast, Alex Catalano started awarding votes on the best player across every game in what we at the A3 are now calling it the ‘Cat Award.’

And if you ask him about it, he’ll tell you it puts the AFLW best and fairest medal to shame and most likely will rival the Players’ Association player of the year award. He will also further claim that Maddy Prespakis has glowingly endorsed it. That’s how much he believes in the award.

Having seen his votes, I am a big fan of it. And it got me thinking about what I can bring to the table. Before recording our latest episode (It’ll be on Spotify and iTunes for all you lovely diehards of women’s footy), it hit me.

A rolling team of the year.

I’ve seen a few yahoo ex-player journalists do teams of the week in the men’s and that’s okay, I guess? But no one seems to be doing a rolling team of the year in the women’s. That’s about to change folks, because I’ve been quietly coming up with a team for week one and suffice to say, there’s a good blend of players that are automatic selections, sprinkled with a few surprises from players that performed brilliantly over the weekend.

There’s a bit to cover here, so let’s get stuck into it.

After Collingwood picked the win up over Carlton on Thursday night, Steph Chiocci mentioned on SEN that Schleicher headed back to Western Australia after the season, and as a result, played some games in the WAFL Women’s competition, which could partially explain how good she was in the air on Thursday night. I’d love to be able to get a hold of the spoil numbers, because I thought she nearly spoiled everything in sight.

God, she was good last year for the Blues, and it looks like she’ll go up another level again this year if her performance on Thursday night was any indicator. Co-captain Kerryn Harrington was made accountable by the Pies forwards, but Laloifi worked her absolute backside off for the most part of the game to stop the Pies from scoring, when they threatened to really blow the game apart.

I’ve been singing her praises practically all week, so I will keep this one brief. White was named as one of the two rising star nominations this week after a sensational job in defence against the Western Bulldogs. She had 20 disposals, seven marks and nine intercept possessions. She was simply brilliant across half-back and deserves her place in this team.

To put it simply, if Cordner was still at the Dees, then losing margin to Brisbane would probably be a bit more significant than 29 points. In her first game in Tigers colours, Cordner was outstanding with 13 disposals, seven marks and 10 intercept possessions. At times she was really saving the Tigers from conceding more scores, which is scary considering they did give up 5.11 on Sunday.

This was an incredible defensive game from her against the Giants on Sunday. Cuthbertson recorded 18 disposals, all but one of them was an intercept possession. Remarkable numbers like that shouldn’t go unrewarded and it will probably come as no surprise to any that she was probably the first one picked in this side. Especially when the Giants were surging early, she was one of a few that really served it right back.

Who doesn’t love a ruck that can kick goals right? Emma King exploded with three goals in the first quarter in North’s demolition job of Geelong at Kardinia Park, but also featured for 30 hitouts and four score involvements with her 10 disposals. There were a few rucks that stood out this week, but this performance gets King the nod.

Alyce Parker just looks like she’ll be getting better and better in 2021, and dare I say it, she could just very well be the best contested player in the competition by the end of 2021. If not, then she’ll be well in the top five. Parker just did everything she could to try and keep the Giants in their clash against Fremantle – 28 disposals, 18 of those being contested along with seven clearances and seven intercept possessions.

It was another day in the office for Kiara Bowers at Fremantle on Sunday, as she continued her work across the midfield, racking up 21 disposals, 10 tackles, five clearances and six rebound 50s. I probably can’t say much else about this can I? Bowers thrives on the contested footy and against the likes of Parker and Beeson, she managed to help get them over the line.

It was a pretty brilliant Karen Paxman-like game on Saturday against the Suns, she tore them apart around the stoppages and out worked them in the second quarter, which effectively got Melbourne over the line. 13 of her 25 disposals came in the second term alone and by half time had 19 to her name. Yes, she was well checked by Jamie Stanton after half time, but you can’t deny the impact she had on the contest.

Bonnici reminded everyone on Thursday night that she isn’t just the third amigo in that elite Collingwood midfield, but she can absolutely serve it up to anyone at anytime, and racked up 22 disposals and four clearances in an outstanding effort. She also recorded six intercept possessions and four tackles, highlighting her abilities to be a great two-way player.

She was playing up along the wing for the most part in North’s win over the Cats and was very damaging when she had the ball in her hands – and that was often. 17 disposals, seven marks, five score involvements. She was playing that sort of ‘link up’ role and played it very well. Also, 415 metres gained is a very good return.

In case you didn’t see the Crows dominate the Eagle or read our review on Monday, Erin’s back, and she’s bigger and badder than ever. She could have easily have kicked four or five goals for the Crows, but had to settle with two, but also notched up 23 disposals, five clearances, five marks and nine score involvements.

I haven’t seen many key forwards dominate a game of AFLW the way I saw Gemma Houghton play on Sunday against the Giants. Finished with 3.2 but it could’ve easily have been five. But her work rate was top notch, 20 disposals, nine contested possessions, three of her nine marks were contested and also had 10 score involvements.

She was my number one player in the competition last year and was one of a handful of Kangaroos that was at her destructive best in the win against Geelong. Garner kicked two goals, but also added 19 disposals, six tackles and seven clearances, splitting her time between the midfield and up forward. God, she’s so good to watch when in full swing.

Started last season by dropping four goals on Geelong and has started season 2021 in similar fashion, kicking three goals on the Giants over the weekend. She also recorded eight score involvements with her 11 disposals, so she was always active and dangerous every time she got the footy in her hands. Here’s hoping she gets an All-Australian nod this year.

Back in the forward line for the first time since the tail-end of the 2019 season and my goodness didn’t she just slot in so well? Huntington won several awards on the back of strong marking hands and football smarts last year and it was business as usual Friday night, with five of her seven marks contested. She also finished up with 2.2 in unfavorable conditions in Moorabbin.

You can definitely argue that Beeson was shouldering as much heavy lifting as her team mate Alyce Parker was – she was that outstanding. She also recorded 28 disposals and also had six clearances, five marks and five rebound 50s. She was in everything and doing her bit to keep the Giants in the fight for as long as possible against the Fremantle juggernaut.

This was far and wide the best game I’ve seen from Ellie Gavalas since I first watched her play for the Bulldogs in the VFLW a couple of years ago. Strong on the inside when she needed to be,but showed plenty of class and poise on the outside as well, kicking three goals out of 19 disposals, and also recorded three clearances and three tackles.

Ellie Blackburn has played in a lot of great games across her time at the Western Bulldogs, but this one could be up there as one of her best of all time. At times, she just looked like she was doing all she could to will the team over the line, and that stat line of 21 disposals, five marks, five inside 50s and two goals says a fair bit to back that up.

She had a strong debut year in 2020 and looks like she’s destined for better things in 2021, playing such a pivotal role in the midfield, making it look like at times that she was handling a wet footy as if it was played in the dry. 23 disposals, four clearances, four marks, five inside 50s and a goal on what was a great night for the Saints down at Moorabbin.

The last spot in this team goes to a player that easily played her best game in her short career. Belle Dawes had 21 disposals, seven clearances and five marks in a very strong display for the Lions as they cruised a strong win against Richmond on Sunday. She looks like she’ll be playing a bit more on the ball this year, and that’s trouble for opposition, as the Lions midfield is already pretty strong.

There’s going to be a few names here that could’ve got a look in, but just missed out. So keep your eye out for the following.

There will be others I’ve forgotten to mention, but here’s where I’m going to end this week. Well, that was sort of exciting, and I will be very interested to see what transpires over next weekend and who will force their way into this rolling team.