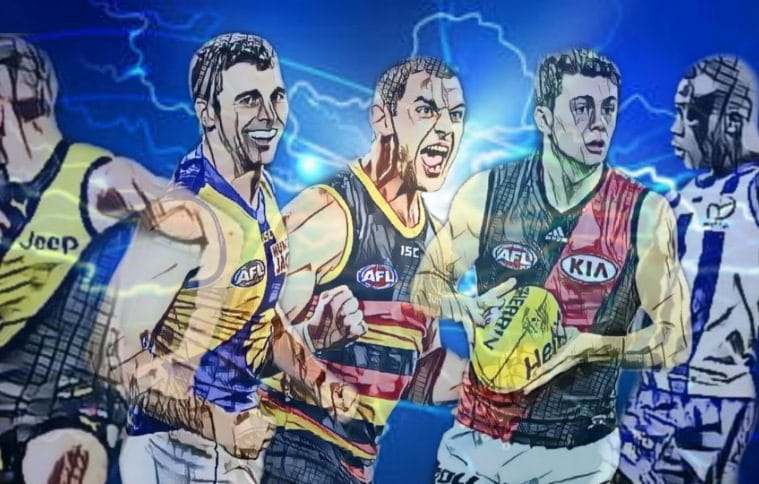 The non-release of the AFL Prospectus by our friends at Champion Data looked as though it was going to leave us in a little bit of a conundrum.

You see, just like most of you, I like to take the piss out of CD’s attempts to inform us of just who is the best of the best at each position each year as they rate their elite players of the competition. Yes, as much as I refused to buy the annual encyclopedic waste of time that the Prospectus was, credit where it’s due – it did generate conversation… even if that conversation meant me naming one player undeserving of the rank “elite” and then someone else naming another who was even less deserving of that mantle.

Remember when they had Aaron Hall as an elite wingman after the 2018 season? Oh, what fun we had…

But wait – as I write this, they have leapt to my rescue with the release of their 2021 version! Thank the gods! I thought it was never going to happen! I mean, I suppose I could have paid for their data and got it sooner…

Hahaha, just kidding. No way I would fork out for that.

While waiting, we football supporters have been forced to concentrate on more trivial matters, such as racism, a pandemic and superstars of the game falling apart at training. It just wasn’t fair, damn it! We were missing the big story – the Champion Data Elite Rankings.

But they’ve come through for us, like the inept troopers they are.

So, in light of Champion Data discovering a new way to let us down by releasing this list later than usual, and then topping that feat by including Mason Cox as part of their 2021 list, I thought I’d revisit their 2020 list of ‘elite’ players and see how they fared in the ensuing season. Did they live up to their billing as elite players, or did they fall over and have us wonder how they were rated so highly to begin with?

Well, they went 50% on the Crows, with Brodie Smith having a very good season and Taylor Walker looking like one of the most elite players at… hell, I don’t know, being where the ball wasn’t? Who knows what they were thinking, there. Tex hasn’t been elite for a few years now. Was excellent prior to 2018, but nowhere near it in 2020.

Not a bad list, but really, a blind man could have thrown Andrews and Neale in as elite players.

Great call on Lyons, who got even better in 2020, whilst the selection of Mitch Robinson came right before he fell off a cliff last season. Zorko is interesting – still a great pressure player, but at 31, his days of being an elite mid again may be gone.

Their 2021 list has Hugh McCluggage joining the list as well, which is probably a very good selection.

No arguments here. You’d be a fool to state that Cripps was anything but elite. Carried the Blues midfield again and was high on the list of clearance and contested possession winners despite playing hurt for much of the season.

Comically, Zac Fisher made their 2021 list. He is joined by Walsh and the newly-arrived Adam Saad.

Drop off for Grundy, but still led the league in hitouts, whilst Darcy Moore backed up the numbers CD used to rate him as elite. Playing the whole season, Moore was All-Australian with plenty of competition for the role. Great call.

The Pies added Brayden Maynard, Steele Sidebottom, Jordan de Goey and… Mason Cox to their elite list, whilst Grundy dropped out for 2021.

Conor McKenna? This is a stretch. Elite at being homesick, soloing the footy to himself and sneakily getting in a game of gaelic footy, perhaps, but in terms of impact in the AFL, nowhere near it in 2020.

Merrett was a great selection and Walla’s inclusion is more than justified. Of course, despite a ripping year from Merrett in 2020, CD booted him out as an elite in 2021. In his place, Jordan Ridley makes the 2021 cut.

Nat Fyfe isn’t just elite – he will go down as one of the best players to play the game. Absolutely zero question about his inclusion.

I thought he may have some company in 2021, with Brayshaw and Luke Ryan the main contenders, but nope… Fyfe remains the only Docker considered elite by CD,

Don’t fret, Freo fans – I rate Ryan as elite; he is our reigning defensive player of the year, after all.

Gaz fell away in 2020, as we expected he would. All good things must come to an end, and so was the case for Ablett’s career. Still offering a great mid-sized target at times, Ablett was elite almost to the end.

As for Danger, yep – unquestionably elite.

Unless we’re talking about second halves of finals against Richmond in the last couple of seasons, am I right?

Sorry… Blicavs, Hawkins and Menegola all are added to the elite list, whilst the returning Gary Ablett drops away.

This is an inspired call and credit has to go to CD on this one. The numbers said Hugh Greenwood was an elite inside mid and despite not being valued at Adelaide, so he went headed to Gold Coast and went about returning their investment with an excellent season.

And with five games to his name, CD has added Matt Rowell to the list for 2021 whilst Greenwood, after his best season, has fallen off the perch. The mind boggles…

This is indicative of how far GWS fell in 2020, isn’t it? Of these players, how many had elite seasons? Maybe Lachie Whitfield? That’d be it.

Cameron looked lazy, Finlayson was pouting his way through the year, Ward looked like a man recovering from a knee reco, Williams missed time and was not considered for the midfield and Coniglio had a rough start to life as an AFL captain.

This season, only Harry Perryman makes the grade as elite. Bet ya didn’t see that coming, did ya?

Ouch. Of the three listed, none had anywhere near what could be considered an elite season, with Henderson playing seven games and retiring… in an elite fashion, of course.

McEvoy was thrown into defence and Breust failed to have the impact the Hawks needed him to. This list is indicative of where the Hawks were at in 2020. The potential was there but the delivery was way off the mark.

Still, both Breust and McEvoy retained their places for the 2021 list, whilst Sicily, Wingard and Gunston all made the grade as well. Seriously, one of them is deserving – that’s it.

The big fella is a lock whenever we talk about the elite players in the competition. One of the two best tap ruckmen in the game and one of the few that will still take a relieving intercept mark.

Gawn was joined by both Petracca and Oliver in the 2021 list.

Another elite player who is no longer in the league. To be fair, CD were basing their rankings on 2018/19 performances but Majak Daw suffered his injuries after the 2018 season and CD still had him rated as elite?

Goldy – yep, what a workhorse he’s been for the Roos. Thoroughly deserved both in 2020 and in 2021. And Cunnington? Well, he was banged up in 2020 so didn’t have an elite season, but at his best, his impact is unquestionable.

Yep, and there should be a couple more added to their 2021 list, as well. Boak continued his stellar late-career form, finishing second in the Brownlow and remaining a leader on a Port Adelaide team that saw everything click into place.

Charlie Dixon, Robbie Gray and Zak Butters make it as “elite”, but somehow Steven Motlop has made it as well. And Travis Boak does not… Yeah… I give up.

I suppose this gives you an indication as to how highly Sydney Stack was rated coming into 2020, huh? He’s fallen a fair bit, and I hope the Tigers can nurse him back to a place where he can play good footy again.

It’s hard to knock the others. Martin picks himself, Prestia was coming off a B&F year, Vlastuin is as consistent as they come and Edwards remains one of the most adaptable players in the game.

The Tigers have just three on the 2021 list, with Dusty, Vlastuin and Edwards all retaining their spots.

Interesting that Ryder made the cut in 2020, particularly given his 2019 wasn’t all that flash, but what happened in 2020 may have CD looking like crystal ball staring prophets. They named the ruck duo as elite and the two blokes combined to perform some elite feats!

The Saints added Jack Steele and Dan Butler to their elite category in 2021, but amazingly, both Ryder and Marshall are now missing.

Well, Buddy WAS elite for a long time, wasn’t he? Sadly, I think that time has now passed.

Rampe is a fantastic call and was on target for another AA selection before breaking his hand again in 2020.

Jake Lloyd moves into the elite company. His performance in 2020 silenced a lot of his doubters and a second Bob Skilton Medal speaks volumes about how the Swans rate him. And despite sitting out a heap of time, Isaac Heeney gets the nod as well.

A mixed bag at West Coast, with Nic Nat the only one that really leaps out as the player who justified his selection.

Yeo was hurt, McGovern was up and down, Cripps wasn’t a patch on previous years and Shannon Hurn started to look a little less sure footed. Darling was good without being great, and I suppose the names listed in this paragraph and their failure to have great years gives a good read on how the Eagles fell away in 2020.

A few dropped out of the 2021 version, but Liam Ryan made the leap. The addition of Oscar Allen is surprising and promising. Not sure he is “elite” yet, but the AFL doesn’t pay me copious amounts of money to crunch numbers for them, either.

Great call on Caleb Daniel, with the little man picking up the Charlie Sutton Medal after a wonderful year off half-back. Terrible call on Matt Suckling, who is another who hung the boots up the season he was picked as one of the elite players in the game.

No f’n idea how Josh Dunkley makes the 2021 grade based on his 2020 season. He was average and played out of position. If he is being rated as a forward/mid, that must mean the pool of forward/mids is top heavy.

Just like one of those annoying superannuation ads, I guess the moral of the story here is that past performance does not indicate future returns.

It will be interesting to see which of the 2021 elite players fail to live up to the monikers bestowed upon them. I’m sure we’ll all point out how elite they are as the season rolls on, right?