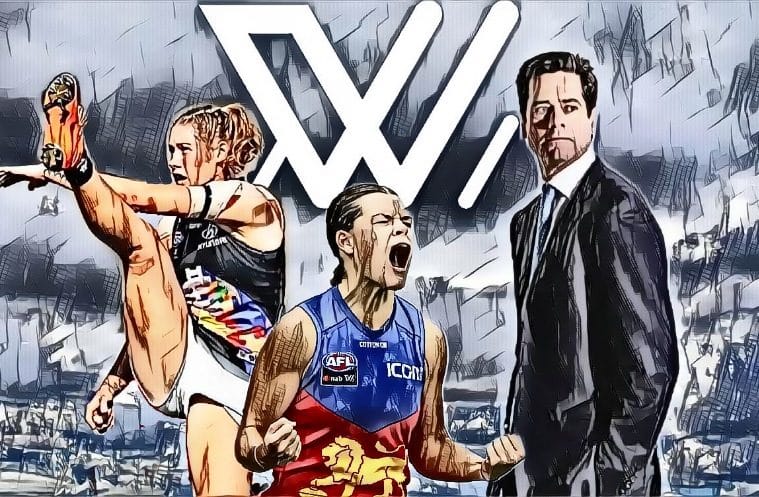 Why AFLW Media Coverage Is Stalling

Criticism in the AFLW – it’s a touchy subject, and some may misinterpret it as criticism of women playing Australian football – especially with the many online trolls.

However, as Marnie Vinall (a Making the Call graduate, which I’ll address later) pointed out in an ABC article this past weekend, players are screaming out for criticism; that is, the right type of criticism, which is comparing their individual and team output, to that of their AFLW peers.

Now the reason for this not happening is institutional. An AFL media industry that’s served up to the women’s football community media ‘professionals’ who are either overworked and undertrained; are too focused on AFL (Men’s) and see AFLW as just an additional obligation or distraction; or are either so chummy or fearful of AFL House to apply critical-thinking.

I have personal experience relating to this from two years ago. To explain, I’m a content provider for one of RSN927’s digital radio channels in Melbourne, where our volunteer group (WARF Radio) air the VFLW Match of the Day each Saturday and Sunday. I was asked to come into the studios for a meeting prior to the 2019 season.

The purpose of the meeting was to meet the new breakfast show producer, who would also be in charge of digital content. This individual had come from SEN and had produced one of their popular weekday programs, as well as their AFL match day coverage.

This stunned me. Surely, a media professional would understand that football is football. Regardless of the league level, or the gender of the players, there’s still the same in-game tactics to dissect, discussion around which players are performing and who are not, what coach is in the hot seat and debate around issues involving league headquarters (just to scratch the surface).

Unfortunately, this goes back to these young producers being under-trained and overworked. Producing AFL (Men’s) centric programs five to seven days a week means that when needed to cover AFLW (or other sports for that matter) they lack the time or care to do their research and understand what and who they are broadcasting.

A very recent example of this was on Friday night during the ABC’s radio broadcast of St Kilda versus the Western Bulldogs. Normally, I’m full of praise for their coverage, which features veteran women’s footballers Chyloe Kurdas, Meg Hutchins and Jess Webster, but there was a decision made by their match day producer in the third quarter that could be best described as careless.

Play has just commenced in the third quarter; it was a close contest with just a kick in it, but about two minutes in, one of the commentators threw down to the boundary rider for an interview.

Now, was this for a critical piece of information, say a player with a serious injury and a coach or medico giving an update on the state of that player? No, it was to chat to Alice Burke’s mum and sister about how they feel with Nathan coaching the Bulldogs and Alice playing for the Saints.

The ABC Radio audience missed more than a minute of play for a novelty piece that had already been done to death during the week.

These novelty pieces keep holding back the public’s perception of the AFLW as a professional league, and keep the – to quote Daisy Pearce – “Mickey Mouse Tournament” mindset ingrained.

It’s not like the AFL were not warned about this in the past. In a meeting I attended with the AFL back in 2015 (albeit a train wreck of a meeting – a story for another day), in which ironically Daisy Pearce was present, I asked an AFL Executive and AFL PR person who were present “If you say Daisy Pearce is the number one player in the country, great, but tell me who is number two, or who is the number one tagger trying to stop Daisy”.

That same year, journalist Sam Lane criticised the AFL’s handling of the first-ever live stream of the AFL Women’s Exhibition Match draft. Media were asked a couple of days out to attend, but as Sam pointed out, how could they write a story about it with no list of who has nominated and no brief on their playing history?

In fact, as of the last draft, AFL House still do not provide the media (mainstream or second-tier) with a list of players who have been nominated.

Then again, criticism from some covering the AFLW is rare due to the fear of receiving a phone call from AFL House or losing ‘insider access’ to a number of stories – the former I’ve been on the end of a few times, including just over a week ago!

That fear affects how women’s football is reported. As an example, this week as part of the AFLW season launch, the media was pushed to run with the line from AFL House that almost 600,000 women and girls played Australian football last year, an increase of 11%.

However, critical thinking, let alone common-sense, should make you wonder how this is possible when (bar three NAB League Girls’ rounds) the entire Victorian community and schools football year was wiped out in 2020 due to Covid-19? Did anyone bother to fact-check or seek independent verification of the AFL’s numbers?

The fear is not restricted to criticising what league headquarters does, but also of their ‘poster players’, such as Tayla Harris or Katie Brennan.

Now some might be hesitant to give a critical eye to Tayla due to the trolls that have harassed her online. Those trolls, and their sexist comments, should always be condemned, but it shouldn’t stop us from reporting honestly on her football.

To have some suggest that she is in the AFLW’s Top 30 players is puzzling when you consider she finished ninth in her club’s best and fairest last year, consistently ranks amongst the worst in disposal efficiency at the Blues, and just got dominated by Stacey Livingstone for the second year running.

With Tigers captain Katie Brennan, the reality is she has not lived up to the standard she set when she dominated the VFLW. In fact, her move to the Tigers and original desire to play in the midfield, threw out the team balance Richmond has been building since their debut in the VFLW in 2018.

The above criticism is good for women’s football. It creates healthy debate and more media coverage (whether via mainstream, second-tier or social media channels) and challenges these footballers to lift their game.

In fact, just a few weeks out from the start of the season, I had an AFLW player agent bemoan to me about the lack of shows analysing the players, the coaches and the in-game decisions and team selections they make.

The truth is, the mainstream media just doesn’t care enough. As I type this piece on a Saturday afternoon, SEN management think it’s a smarter decision to air pseudo-racing coverage – audio of three blokes yelling at a TV screen for their horse to get up – than any pre-game, let alone live match coverage, of the AFLW.

What’s worse is, AFL House doesn’t seem to care either that their “broadcast partners” (which they gave away the rights to the AFLW to) are not, well… actually broadcasting their games.

Now, to make the situation even sadder, there are independent and second-tier media just dying for a chance to be given the green light to cover the competition.

Just recently, more than 20 women from a variety of backgrounds (including some AFLW players) took part in the ‘Making the Call’ online class – a program created by The Outer Sanctum’s Emma and Lucy Race, designed to help women get into football broadcasting.

Aside from three who already had mainstream media gigs lined up before taking part in the online class, the door to broadcasting the AFLW remains mostly closed to the rest – closed to women who have a passion for the competition and would give it the critical analysis the players are calling for.

In fact, coaches (and legends of women’s football) such as Nicole Graves, Tracey Kick and Krissie Steen are great media talents, with excellent game insight, but always get overlooked.

So, what can be done? Well, besides supporting podcasts and articles by second-tier media (which have a loyal, but smaller reach), pressure needs to be put on AFL House for them to put pressure on their media/broadcast partners to improve their coverage (during, pre and post-game).

We know AFL House got itself into this mess by awarding the AFLW rights to the status quo – who in a monopoly have no incentive to lift their standard – instead of seeking new media partners who would be willing to go above and beyond; but there are options.

If radio broadcasters won’t call games, AFL House needs to use its contractual loopholes to grant temporary coverage rights to independent and community broadcasters, or even have clubs to produce their own coverage.

If mainstream print media won’t give the column inches, AFL House must direct clubs to actively seek out and present player/coach interview opportunities to second-tier media.

It just comes down to whether AFL House wants to do anything about it.

*Peter Holden is the founder of Women’s Australian Rules Football Radio (WARF Radio). Established in 2014, WARF Radio will call their 7th season of VWFL/VFLW this year. Personally, Peter has more than 20 years media experience, and has broadcast approximately 650 matches of Australian football (Men’s, Women’s and Juniors).