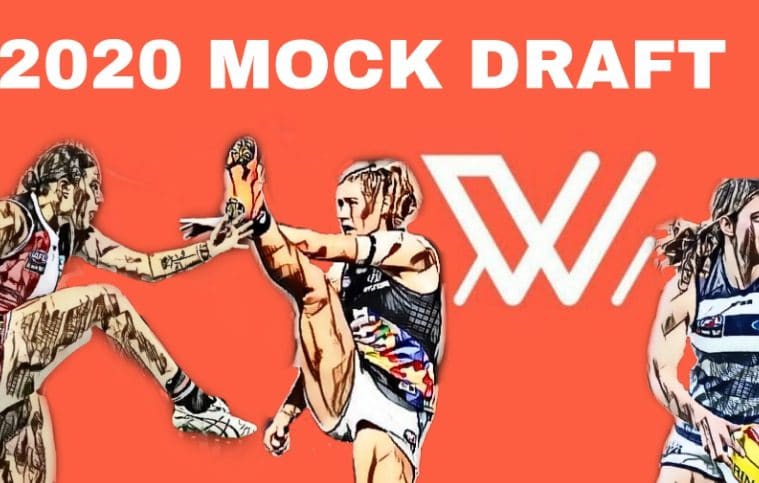 We’re getting ever so close to what is the most unorthodox AFLW Draft in the league’s short history.

What makes this so unorthodox is that the whole process will be conducted from AFL House and teams will ring in and make their selections for all of us at home on our computers, laptops or whatever device you have wherever in the world you might be during these tough times.

Over the past week, I’ve shown you some of the best prospects around the country, now it’s time to predict where they will land on Tuesday night.

So without further ado, here is my predicted first round of the AFLW Draft. There are 16 picks all up, and for the relative newcomers to women’s football, a couple of things to note here:

The consensus pick is Ellie McKenzie, and I’d be seriously shocked if they pick anyone else here. McKenzie is the perfect size for big-bodied midfielder that has elite skills and decision-making abilities. The fact that she is also a very capable forward as well makes it all the more enticing for the Tigers to pick her up – it’d complete a busy off-season for Richmond.

Here’s a dilemma for my fellow Bulldog fans – Who do you take here? Alyssa Bannan has been a name that has been linked here and given that key forwards are at a premium, could give Nathan Burke another key forward option to work with. It’s not a bad shout here, as midfielders will be available by their next selection, but if they identify a midfielder more critically, then I could see Tyanna Smith being taken here.

West Coast will be looking at how they can fix their issues going forward. Someone like Shanae Davison would be a chance to go here. Her ball use, ability to finish off plays and aerial ability would add another dynamic to their forward line, whether she plays deep or a little higher up the ground. Wouldn’t discount Mikayla Morrison either – a player that also possesses class with the ball in her hand.

If it is anyone other than Teah Charlton, then I’d be shocked. She is arguably the best South Australian in this year’s Draft and has shown that she can play well either as a midfielder or as a forward. The Crows struggled at times to generate scores going forward this year, but they also did miss a few critical players due to injury, so it’s a bit unfair to assess Adelaide’s situation.

This pick will depend on what the Bulldogs do with the second pick. I think Melbourne would love to get their hands on a key forward to overtake Tegan Cunningham’s spot when she retires and if Alyssa Bannan is available here, I don’t think they’d hesitate. But if not, then Melbourne would look at best available. Tyanna Smith would be high on their radar and could be seen as an ideal replacement for Elise O’Dea.

This is a tough pick to predict. The Saints are pretty stocked in defence and their midfield unit is pretty good with scope to be even better – they also have secured Alice Burke with the father/daughter, but the selection is expected to be a second round.. They averaged 3.7 goals per game in 2020, so some forward craft would be handy. Olivia Barber had a very strong 2019 campaign, showcasing her ability to take big grabs and kick goals. Could she be the ideal partner in crime for Caitlin Greiser?

A couple of options present themselves for the Suns here. Daisy D’Arcy is a very athletically skilled individual that can play a variety of roles, whilst Maddison Levi gives the Suns exactly what they need – a key position forward that is a fierce competitor in the air with enormous upside. With the first pick in the Queensland talent pool, they can’t lose out here.

Zimmorlei Farquharson has been widely regarded as one of the most exciting prospects to come out of the Draft and being linked as a Brisbane academy player, could find herself going with the Lions’ first pick here.  A very dangerous threat around the goals, Farquharson is a player that makes her disposals count and could make Brisbane’s forward line all the more potent.

A bit similar to the situation at Adelaide. Tarni Evans is widely slated to be the best talent from New South Wales. She’s got the height, the versatility and skill-set to be a dangerous player for the Giants in years to come. Wouldn’t be too shocked if Jayde Hamilton pops up here as well – she is a competitive beast around the ground and can pose as a goal-scoring threat as well.

The Cats perhaps don’t need many more midfielders in their team, but a bona fide ball magnet like Laura Gardiner is perhaps too good to pass here. Gardiner’s two games for the Falcons this year were absolutely insane and would be a handy player considering Nina Morrison probably won’t be seeing much gametime in 2021.

Their second pick in the first round should see the Bulldogs address their midfield stocks. They’re spoilt for choice here. Jess Fitzgerald would be good to see linking up with Knights’ teammate Gabby Newton and if Bannan goes with the first pick, it makes a bit more sense to go with her here. If Fitzgerald is off the board here, they could go with someone a bit more local in Isabelle Pritchard, who can play either in the middle or across half-back.

Carlton are one of a few teams in the fantastic position of drafting the best available talent because there aren’t any real weaknesses. Darcy Moloney, Isabelle Pritchard and Sarah Hartwig are all still on the table here and well the Blues can mount cases for all three of them here. I think Pritchard’s ceiling is the highest. She’s tall, capable of playing either in defence or in the middle – Hartwig is a close second and could be seen as an alternative.

A bit similar to Carlton, North Melbourne don’t have any critical needs, having all the bases covered really for next year for that premiership tilt. I can see the Roos targeting a ruck option for the future, given that they like playing Emma King up forward and Viv Saad is in her prime years in an athletic sense. Maggie Caris would be a good look in here. Averaged 29 hitouts this year, but still plenty of intangibles to iron out before she becomes a mainstay.

Another team that is in the comfortable position of not actually needing to address a specific need on their list. So I’d imagine they’d be looking at the best available talent here. Both Sarah Verrier and Isabella Lewis mount strong cases to be selected here, both are tough at the contest and can offer up other roles around the ground than playing midfield. It’s a tough one, but I like Lewis’ stoppage work a bit better.

With their second pick, Melbourne could use a defender, and with Pritchard being snapped up by the Blues a few picks earlier, this would be where Sarah Hartwig lands. At 173cm, she might be a fraction undersized for a key defender, but she is still an elite intercept and a beautiful rebounder of the footy. She’d be handy after losing both Bianca Jakobsson and Harriet Cordner were traded out.

This is the third and final pick that the Bulldogs have for the Draft. At this stage, they have both a key forward and a silky skilled midfielder. Darcy Moloney would shore up their midfield stocks for the foreseeable future and with her football smarts and ability to run, could play a multitude of roles for the Dogs here: Pure on-baller, play along the half-forward line, possibly even re-tool her as a running half-back.

And that brings to an end of the first round. It’s a big AFLW draft, with talent such as Mimi Hill, Renee Saulitis, Isabella Eddey and Olivia Meagher still available from the Victorian section. Also expect Tarni Brown to be taken by the Pies as a father/daughter selection in the second round. There is still talent in WA for both Fremantle and West Coast and Queensland for Brisbane and Gold Coast and expect Adelaide and the Giants to pick up players necessary to help them push for Finals once again.

Good luck to one and all that are hoping to be drafted!!!