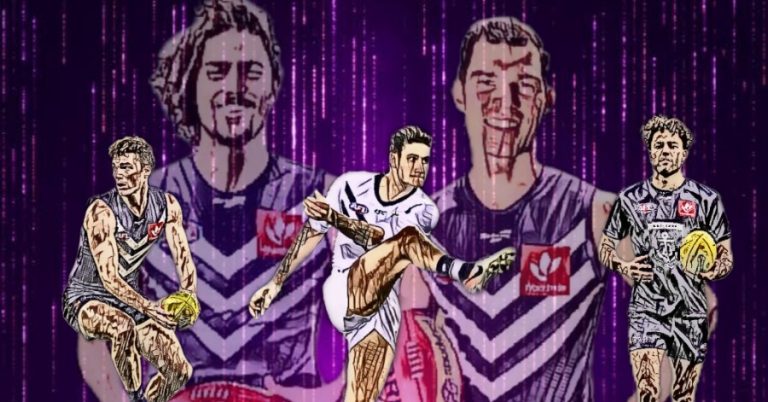 Addition By Subtraction – How Fremantle Covers The Exodus

It’s always interesting to listen to both the AFL media and rival supporters during the off-season. Unless a team does spectacularly well, it seems as though the knives come out pretty quickly.

And this was the case this past couple of months in relation to the Fremantle Dockers.

The prophets of doom and the harbingers of disaster flagged this “mass exodus” from Freo as the beginning of the end. Like salivating dogs, they sensed an opportunity to sink their teeth into a wounded animal and go for the kill.

From the outside looking in, you can kind of understand their perspective. Sure, it’s a very simplistic one. People leave = not good. I get it, but for the most part, their theories have a heap of holes in them. However, if you’re just flipping through the off-season moves, you could be forgiven for thinking that something is up with the Dockers.

The list of those leaving the club included Rory Lobb, Blake Acres, Griffin Logue, Lloyd Meek, and Darcy Tucker. That was enough to set alarm bells ringing for some pundits, who claimed that good clubs don’t lose required players at this kind of rate and that the club’s depth would be severely tested in 2023 as a result.

Only one of those two statements is remotely true.

For the purpose of this article, let’s focus on the phrase “required players”. When you apply that as the quantifier, all of a sudden, Fremantle doesn’t seem that depleted by this “exodus”.

Of the departures, the one I can see stinging the most is that of Blake Acres. He had a career-best season in 2022, working harder than I’ve seen him in the past at either Freo or St Kilda, as he locked down a spot on the wing and became a genuine two-way threat. If you could pull back one player the Dockers lost in trade or free agency, he’d be the one.

But what does that say for the others? And how do they go when you apply the “required player” criteria to them?

The arrival of Luke Jackson blew the doors off at Freo. It opened up a world of opportunity for the club, but went a fair way to slamming the door shut on the chances of Lloyd Meek. Playing behind Sean Darcy and likely not getting a run as backup due to Jackson’s burgeoning talent, Meek saw the writing on the wall and explored his options. Those options saw him wind up at Hawthorn.

So, in essence, Fremantle lost a bloke, though quite talented, that was going to be a third-string ruckman.

No disrespect intended to Meek, but that is no great loss.

But Griffin Logue is a big loss, right?

In terms of talent, yes. In terms of his place in the Fremantle team… not so much.

Logue came into his own in 2022 and was highly effective in the role of swingman for the club, but he was a man without a true position in a Freo side that boasted immense talent in his preferred position. The Dockers have Luke Ryan, Alex Pearce, and Brennan Cox patrolling the back half and doing a damn good job of it. They were the fixtures of a defence that was second only to Melbourne in points allowed, and the margin between the two clubs was less than a straight kick.

Logue was a luxury to have for Justin Longmuir. Still, the fact that he was thrown into the attacking fifty as a defensive forward should be an indication as to where he sat in the Dockers’ defensive hierarchy. In terms of big defenders, he was viewed as the fourth best.

A decent loss, but nothing that will have supporters crying into their summer beers.

Darcy Tucker left for North Melbourne, as well. I don’t need to go into great detail other than to state that he was a fringe midfielder at Freo, and fringe midfielders are a dime a dozen in the modern game. You wish him luck and hope he gets a good run in the North on-ball brigade, but of all the players, this loss is the least concerning.

Rory Lobb, on talent, would be a huge loss.

Rory Lobb, based on what he brought to the club and the want away attitude he displayed, is like addition via subtraction.

For a man with his height and ability, he is a perennial underachiever at AFL level, and his team-hopping ways are likely something Freo will be better off without. Again, the spectre of Luke Jackson looms large over this move, with the former Demon likely to play quite a bit as the second key forward. If you were to choose between the two to build around, I now who I’d be picking.

Matt Taberner is the other component that would make the loss of Lobb a non-factor. At his best (and fittest ) he is one of the best contested marks in the game and his leading up to the wings opens up huge space behind him. Get him right and the role Lobb left behind is recoverable. It also opens the door for Josh Treacy to have a bigger say in proceedings.

And that brings me to Acres.

This one is the real shame, as he’d really found his niche at Freo and now will go through the process of having to learn the role allocated again under a new coach at Carlton.

In terms of covering him, Nathan O’Driscoll looked very likely before injury derailed the majority of his season. With another preseason under his belt and the opportunity to make the position his own, he will be ready to give it a red-hot go. The solid defence at Freo and the improvement of Heath Chapman and Hayden Young also allowed James Aish to pinch-hit on the wing at points, as well. With those two running on the outside, it should be more than adequate cover.

That said, I’d prefer Acres – his hard run made a real difference. Getting only a future third for him… that stings a little.

When you add into the equation the arrival of Jaeger O’Meara, the Dockers look to have added a little more grunt in the middle, which is cover for Nat Fyfe if it turns out his time in the midfield is limited or…. gulp… over.

It is the nature of opposition supporters to seek the worst-case scenario when it comes to a rival team and cling to it. This is particularly true when it involves a crosstown rival. For some, the satisfaction gained from reading about the gains of their own team is only matched by reading about the failures of their opposition.

And the newspapers and websites know it.

They will continue to gravitate to the worst-case scenario, as Freo fans will want to read why they’re convinced their team will fail, and the opposition supporters will want to believe it.

Here, we see it for what it is.

Yes, Fremantle lost players after the 2022 season. Yes, the depth may be tested at points of the season as a result. However, in terms of the best 22 for the 2023 season, Freo may have even got a little better despite the departures.

The Dockers will remain a force in 2023, and the trade/free agency period that was supposed to indicate their fall will quickly be forgotten.

It might just be replaced with talk of a deep finals run. And if they get a September win or two under their belts, with a young nucleus hungry for success, who knows how far they can go in 2023.