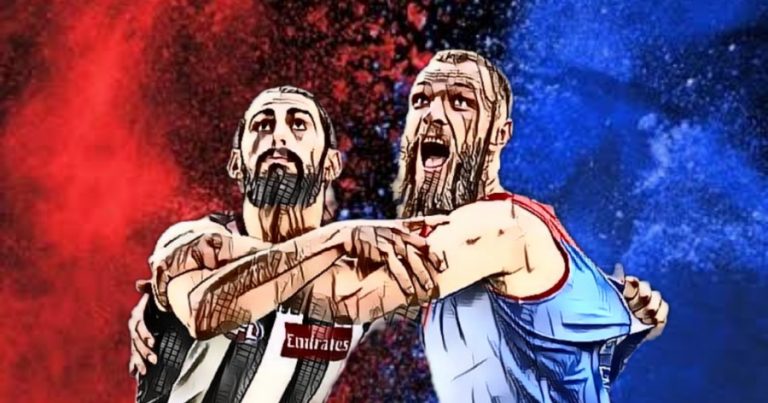 There was a time, not all that long ago, that we had the AFL equivalent of a heavyweight title fight in terms of the premier ruckmen in the game.

Take a seat in the Mongrel Time Machine as I transport ou back to a time before pandemics, lockdowns, and weekly racism scandals…

Oh, wait… that last one was happening then, as well.

The year was 2018. The Melbourne Demons were riding high, eyeing off their first real crack at a flag in dozens of years (I don’t count 2000… they were no chance). The Magpies were also poised to give things an almighty crack, and ended up going perilously close to pulling off a remarkable win on the last Saturday in September.

Sadly, for both teams, the West Coast Eagles stood in the way, and in successive weeks, ended the dreams of both contenders, claiming the premiership on the back of a wonderfully skilled style of play and a brilliant end-to-end piece of play that will forever be etched into the hearts and minds of footy lovers, everywhere.

Yes, yes… Maynard… blocked… something, something.

At the helm of those teams, the big men were coming off a dominant season. Brodie Grundy made the leap into the upper echelon of AFL ruckmen in 2018, collecting his first All-Australian nod. However, his position was on the bench. The first ruck duties went to the man-mountain from Melbourne, Max Gawn.

Over the next 12 months, the Grundy v Gawn war was a particular highlight, with both men seemingly at the peak of their powers. Grundy would reverse the positions in the 2019 AA team, taking over as the number one ruckman in the game and relegating Gawn to the bench. However, the years following saw Gawn once again re-establish himself as the premier big man in the AFL…

… despite what West Coast fans say.

As it stands, Grundy has not added to his dual All-Australian selections in 2018/19, whilst Gawn has gone onto pick up a further three selections, making him a six-time selection and cementing him as one of the most decorated rucks of the modern era.

Now, as Collingwood look to revamp their list and save a bit of money in the process, the Dees are looking to reinvigorate their own. The opportunity to combine the powers of Grundy and Gawn as part of the same team appears to be close to becoming a reality. Three years ago, this would have seemed ludicrous, with Grundy the only man consistently able to take the game up to Gawn, but heading into the 2022 Trade Period, the likely landing spot for the Collingwood big man seems to be at the Dees.

And it could be the move that catapults Melbourne back to the top of the league.