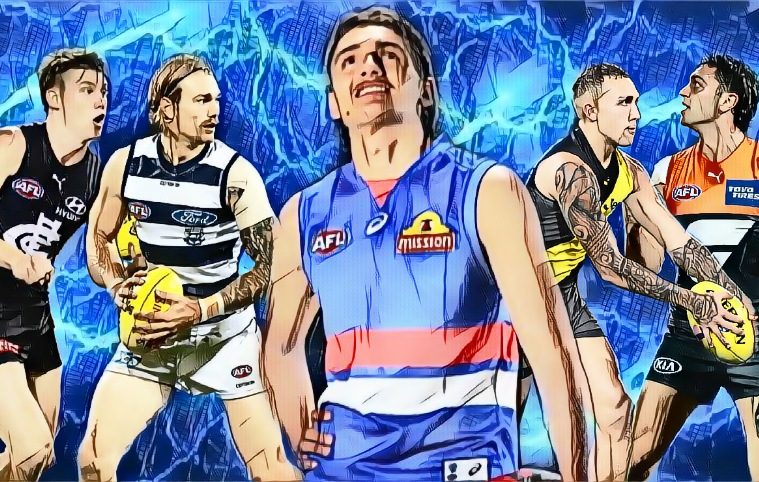 Draft Points, Gambles, And The Elusive Sure Thing?

When the Western Bulldogs used their NGA rights to match the Adelaide Crows’ #1 pick for Jamarra Ugle-Hagan, you’d be forgiven for not knowing what exactly that entailed for anyone- not for the Dogs, the Crows, or Ugle-Hagan himself.

In addition to this, there’s a lot of buzz about Nick Daicos in the upcoming draft, and how Collingwood would have the opportunity to match any bid for Daicos under the father/son ruling, even if it means it’s likely to mean they go into point deficit for the following draft.

In short, the Bulldogs had draft rights over Ugle-Hagan because he was tied to their Next Generation Academy (NGA), which meant that they could match a draft pick if they gave up enough draft points.

But how does that work?

Each selection in the AFL draft is given a point value, which is where their draft points come from. In order to match the points selection for Ugle-Hagan, the Bulldogs surrendered picks 29, 33, 41, 42, 52, and 54- not in a trade, the picks just never happened.

Effectively, the Western Bulldogs gave up the opportunity to draft four players in the second round and two players in the third to snag the player they were tied to.

Can it be proved that this ever works?

Here are some examples from recent years as proof of concept, almost, but more to explain the concept using real-life concrete examples.

In 2019, the Blues picked Liam Henry 9th overall, at which point the Dockers gave up their remaining picks in the draft as well as going into a points deficit for the next draft. The deficit resulted in their 2020 pick (6th, based on ladder performance) sliding back from 12 to 14.

The Dockers drafted Liam Henry and Heath Chapman in exchange for picks 52 (Ryan Byrnes to St. Kilda), 55 (Trey Ruscoe to Collingwood) and 12 (Tanner Bruhn to GWS) the following year.

With the very next pick in the same draft, Carlton drafted Tom Green, which GWS matched (NGA) with picks 41, 56, 59, 67, 71 and a deficit for the following draft that resulted in their pick sliding from 6 to 23.

So, in reality, the Giants drafted Tom Green and pick 23 in exchange for Francis Evans (Geelong), Ned Cahill (Essendon), and Jaxon Prior (Brisbane). Picks 67 and 71 weren’t used, and pick 6 in the following draft was used by Hawthorn on Denver Grainger-Barras.

In the upcoming draft, due to the fact that Collingwood traded their first-round pick (currently #3), they’ll have to give up all of their picks plus a deficit in 2022 for Daicos. The son of club legend, Peter, is currently mooted as first or second overall pick, so that points deficit will be 882 points (if he goes first) or 486 points (if he goes second). In layman’s terms, that’s enough to shift you from, say, fourth in the draft back potentially as far as 14th. Given the picks above, is that ever worth it?

(That’s the question Collingwood fans have to consider before taking Nick Daicos. Yes, it’s not as though he won’t be an excellent addition, but is it worth this selection at the cost of the four picks they would have to give up as well as the impact on next year’s draft?)

The best way to work out if giving up a huge draft haul is worth it is to go back over historic drafts and see if the data backs you up, and there’s two schools of thought- a direct correlation school, and a platonic ideal school.

As there are two different ways of approaching a move as significant as Ugle-Hagan’s, they’ve been broken into Group A and Group B. Group A is the correlation, B is the platonic ideal.

The players in Group B are ‘best case scenario’- assuming Ugle-Hagan was the best player in the draft, as the Dogs surely hope, and then comparing him to the best four players taken in the second round and the best two players taken in the third (by games played). The ‘best’ player from each draft class, or that draft’s Ugle-Hagan equivalent, is chosen through the first-round player with the most Brownlow votes.

It’s been all of one season, but there’s no question right now – you take Rowell over six scattergun selections. He looks like a genuine star despite his injuries, and while Ryan Byrnes has looked good in fits and starts, Smith and Nyuon are yet to debut for their clubs. Too early to tell but I think you take Rowell.

Early lessons learnt here are that maybe the Saints are good at drafting late – Bytel is starting to look good, as is Hind (albeit now for Essendon). Koschitzke looks like he could be a real player. However, Sam Walsh is a future and maybe current Brownlow candidate, and I think teams prefer that to six role players every time. He also won the Rising Star that season, which cemented him as a deserving first pick.

Cam Rayner’s a good footballer. Let’s get that out of the way first. However, this is the first draft where he’s not clearly the best player in his draft, and there’s a strong selection of players taken in those later selections. While Wooley is yet to play for Brisbane, Spargo has been good when fit, and McCartin and Ballard are looking like legitimate key defenders. Three hits out of six is a good return.

2016’s where the data really starts showing out. Shai Bolton is a dual premiership-winning player and this season he’s developed into an important part of Richmond’s play. Willie Rioli won a flag with West Coast his debut season and averages more than a goal a game when fit, and ‘when fit’ is exactly the issue with 2016’s #1 pick – McGrath’s been essential to the way Essendon play footy, and was named in the AFLPA first team in his debut season. Five years on, I think you still take that over the six players you could have acquired.

These players collectively have played 89 games to Weitering’s 112, and he was Carlton’s best and fairest last season. Mitch Brown alone makes up 61 of those 89 games. If 2017 was the most debatable crop of picks, this is the least. Weitering over these six blokes every day… sorry to these six blokes.

These six have been more industrious than the obviously talented but oft-injured Rowell, with the Kangaroo pair really standing out. Too early to tell, but nine Brownlow votes from the five games he played in 2019 makes Rowell hard to count out here.

Would you rather have one truly outstanding player or six players who are between good and very good? That’s the question that hangs over the piece, of course. However, this is the most on a knife-edge of any selection. Walsh could be good enough on his own, of course, but the more the others develop the more competitive this grouping looks.

This is an example of how good those six picks could be. The best player in this draft class (Kelly) was taken in the second round, and despite Brayshaw looking at coming to his own this season, you’d take Kelly head to head even before you consider Worpel, 2020 All Australian Liam Ryan, and the others.

No disrespect to Tim Taranto, who is a great player in his own right, but this an example of the worst-case scenario for giving up these picks. Two time All-Australian Tom Stewart is one of, if not the, best player to be drafted in the third round, and Luke Ryan was an All-Australian and club Best and Fairest in 2020. There’s no world in which you take Taranto over these six players.

Six years after this draft, Clayton Oliver is and continues to be exceptional. It’s been covered on this site repeatedly that he’s a contested ball magnet, but you can still make the argument that at least two of these players would be more valuable to have than one single Clayton Oliver. That said, this is as close as it comes other than the 2018 selections.

In short, taking the number one overall pick is probably better than a ‘random allotment’ of draft picks, as in the case of Group A. However, if your list management team is one that is capable of picking the best available players with your second and third round picks, every draft there has been two or three players hypothetically available that would improve a team more than one standout player.

In the case of the Western Bulldogs, a team who finished seventh last season and are top four at the time of writing, one guaranteed sure thing is likely better than six shots in the middle of the draft. The other side of the coin is a team like Collingwood, who are likely better off to have four bites and not surrender future draft points than they are to insert one very good player into their current list. If nothing else, this proves there are second and third-round diamonds in every draft if the list manager can find them.